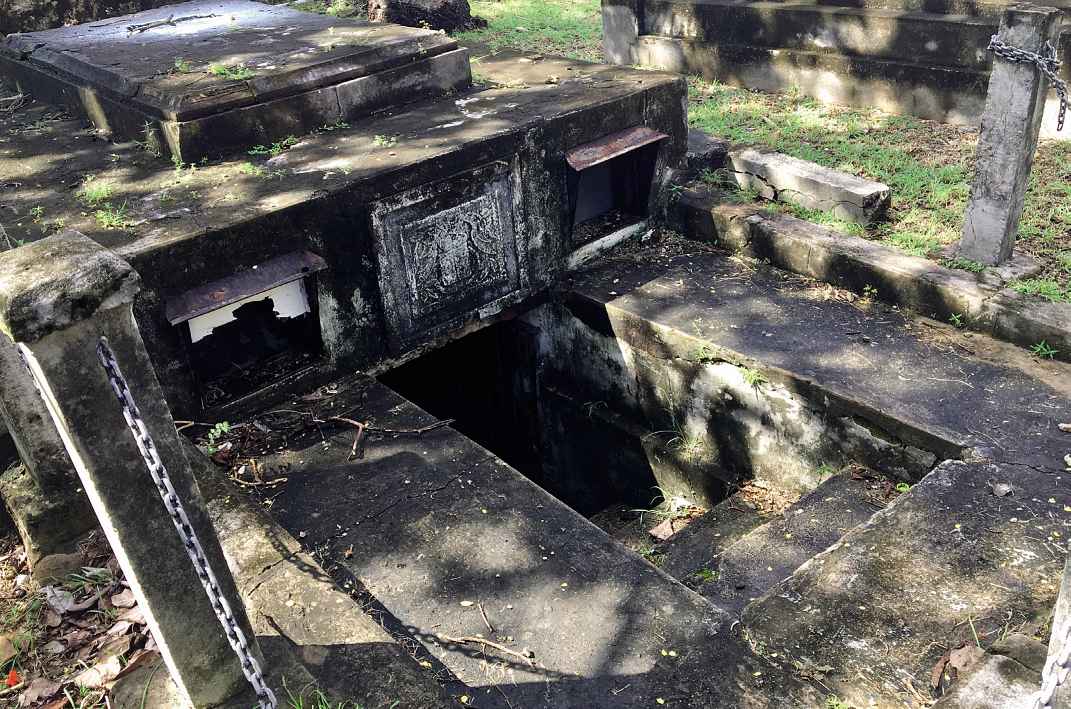 The moving coffins of Barbados have been a staple subject of books on the unexplained for over a century, and yet no one has so far provided a wholly satisfactory solution to the mystery. BENJAMIN RADFORD argues that we might have been looking in the wrong place...

The story of the restless coffins in a Barbadian burial vault (see FT133:40-44, 347:26) was one of the two earliest “unexplained mysteries” that caught my attention as a teenager (the other being the 1855 Devil’s Footprints case in England). I forget exactly where I read it – probably a Reader’s Digest book of mysteries or another of its ilk, which I voraciously consumed at the time – but I distinctly recall poring over the story and getting chills imagining what a ghost or curse would do to me if I crossed it. I took comfort in the fact that Barbados was far, far away, separated from me by at least one sea, and whatever evil possessed the coffins was unlikely to pursue me.

As the years passed the story faded, replaced by newer and more exciting reports of alien abductions, chupacabras, crop circles, and other fortean high weirdness. It was a stale, stuffy sort of distant mystery locked in time – the early 1800s – though superficially and inevitably rehashed in later books on the unexplained. Despite a handful of articles on the story, there was nothing new and little if any follow-up. The coffins were long gone, and nothing notable had apparently happened since. I never bothered to look into the mystery, partly because the West Indies remained just as far away, and partly because there seemed little to profitably investigate at this remove. 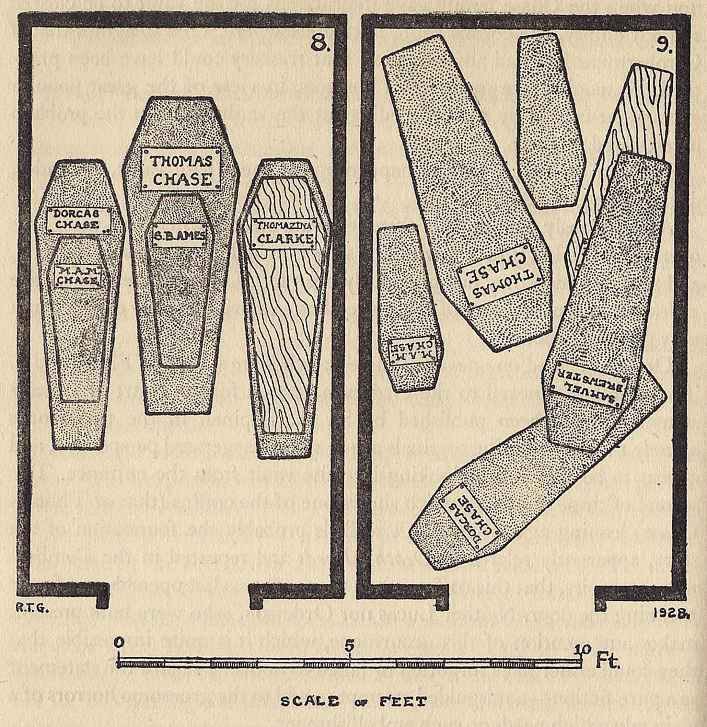 Nevertheless, I’ve since become much more familiar with folklore and visited the ChaseVault twice over the past few years, rather improbably discovering fresh angles on the stale old tale. I’d always assumed that the musty mystery, calcifying for two centuries in the sweltering Caribbean sun, would always remain unsolved. I no longer believe that to be the case.

There are several versions of the famous story (more on that later), but the basic one goes something like this, taken from The History of Barbados (1848), by Sir Robert Schomburgk: “A strange occurrence took place in the adjacent churchyard, the natural cause of which has never been explained. On two occasions, when the death of a member of the family of the late Colonel Chase had rendered it necessary to open the family vault, it was found that the coffins had been removed from their places, and as no signs were observed that the vault had been opened without the knowledge of the family, it excited great astonishment. Before the vault was walled up again, the coffins were restored to their original position. Shortly afterwards it was requisite to open the vault again for the admission of a member of the family, when the coffins were found to have been displaced as on the former occasion; the family now became anxious to ascertain the truth, and particular pains were taken in securing the wall, and fine sand was thrown over the floor of the vault, so that, if a person should enter it from any other part than the usual entrance, marks might be left behind. [Then-governor] Lord Combermere was residing in 1820 in the neighbourhood of the church, and having been told of this mysterious circumstance, he made unexpectedly an application to the Rector to have the vault re-opened, when to the astonishment of all present, the coffins, to the number of five or six, were found scattered about, and one of the largest thrown on its side across the passage, so that, had the door not opened outwards, an entrance could not have been effected except by removing the slab on the top, which is of immense weight. The private marks made on the previous occasion were undisturbed, and as this was the fourth occurrence of a similar disturbance without the cause being explained, the family resolved on removing the bodies from the vault, and some of them were interred in the parish churchyard. The vault is now empty, and the Rector has since ordered it to be walled up. One of the gentlemen who accompanied Lord Combermere took a sketch of the position in which the coffins were found, copies of which are still extant in the island” 1.

The earliest published version of the story seems to date to an unsourced passage in J Alexander’s 1833 book Transatlantic Sketches. Consulting it and other sources we can add a few more names, dates, and details to this outline: The vault at Christ Church Parish Church in Oistins was originally built for another family, the Elliots, but purchased in 1807 by Colonel Thomas Chase, who buried his infant daughter Mary there in February of the following year. In 1812, the vault was again opened to accept a second daughter, Dorcas (a rumoured suicide), and the coffins found to be in disarray. Colonel Chase himself was interred there later that same year – dying, it is said, either by his own hand or killed by slaves for his brutality. The vault was opened twice in 1816 and again in 1820 to receive a Thomasina Clark, again with the same baffling results. It was this last opening that allegedly drew Lord Combermere to investigate, an event to which Nathan Lucas, a local chief justice, claimed to have been a first-hand eyewitness.

The story has many iterations, including accounts attributed to Lord Combermere, Nathan Lucas, Reverend Thomas Orderson, and others; versions written by Robert Reece, Sir Algernon Aspinall, K Redding (author of a 1860 pamphlet titled Death Deeds) and others. I will spare readers a full accounting of them here, but reasonably comprehensive reviews can be found in works by: Andrew Lang (‘Death’s Deeds: A Bi-Located Story’, Folk-Lore, 31 Dec 1907), Brian Ridout (2018), and Rupert T Gould in Oddities (1928).

There is no agreement on the order of interments, nor even on how many coffins the vault eventually held. Details aside, the key conclusion is that the versions are in many ways contradictory and much of the ‘credible’ information fabricated or simply false.As Joe Nickell notes: “Although Lucas avows he was an eyewitness to the last opening, he is forced to rely on the Rev. Thomas H Orderson’s account of the earlier incidents and Orderson himself (if several ‘authentic’ accounts allegedly signed by him can be believed) never told the story quite the same way twice.” 2 Lucas’s original report – considered among the most reliable and detailed account of the events – has never been found (if it existed at all), and was merely attributed to him by an anonymous source. Numerous significant discrepancies between the stories have been noted by many researchers.

Brian Ridout in particular does a masterful job of comparing versions and tracing fabrications, noting for example that Death Deeds (1860) “is important because it is extravagantly exaggerated and has influenced much that has been written subsequently”. He concludes: “Most of the descriptive comments made about the vault in published accounts are more or less incorrect or unhelpful. The Death Deeds portrayal is completely imaginary.” 3 There are several drawings of how the coffins were found when the vault was opened, adding apparent veracity to the stories, but they are contradictory and wildly inaccurate as to scale and other factors.

With this background in mind, I recently visited Barbados to investigate what I could, both in terms of folklore and to evaluate a novel explanation by Ridout recently proposed in the Journal of the Society for Psychical Research. I interviewed tour guide CJ Hinds in Bridgetown, Barbados, as he drove us to the Christ Church cemetery to see the infamous vault.“It’s a true story, and it’s not the first time something like that has happened in Barbados,” he said (more on that later). We discussed the most common explanations along the way.