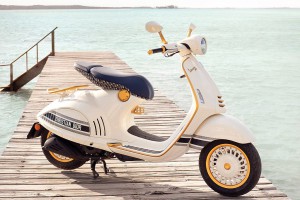 Vespa and Dior have joined hands to create an exclusive scooter matched with a range of high-fashion accessories that celebrates the free spirit of both brands. This limited edition offering, known as the Vespa 946 Christian Dior is probably one of the most fashionable scooters you’ll ever lay your eyes on!

The Vespa 946 Christian Dior sports a monohull architecture and subtle graphic lines that pays tribute to both houses. In fact, it has been designed by Maria Grazia Chiuri who is the Director of Dior women’s collections. Another key element that you can find on the Vespa 94 Christian Dior is the top case of the saddle patterned with the Dior Oblique motif- a design that has stood the test of time ever since it was first created by Marc Bohan in 1967. The design is also found on the luggage rack as well as on the custom helmet for this unique range. Speaking of accessories, the Vespa 946 Christian Dior comes with a  series of matching bags and gear that can be bought exclusively in Dior boutiques.

As for the scooter itself, the base is the Vespa 946 as the name suggests and it was first introduced in 2013. It draws its inspiration from the MP6 prototype that was made in 1946. It is a fine specimen of Italian craftmanship and comes powered by a 125cc, 4-stroke, air-cooled engine with electronic fuel injection. The Christian Dior version gets an exclusive colour with hints of gold tossed in. The saddle is finished in real blue leather as are the handles. The right side of the scooter carries a Christian Dior Paris logo, however on the left side the customer has the option to personalize it!

As for the price, lets just say you could most likely get yourself a nice car, but then it wouldn’t be a classic icon like this scooter!