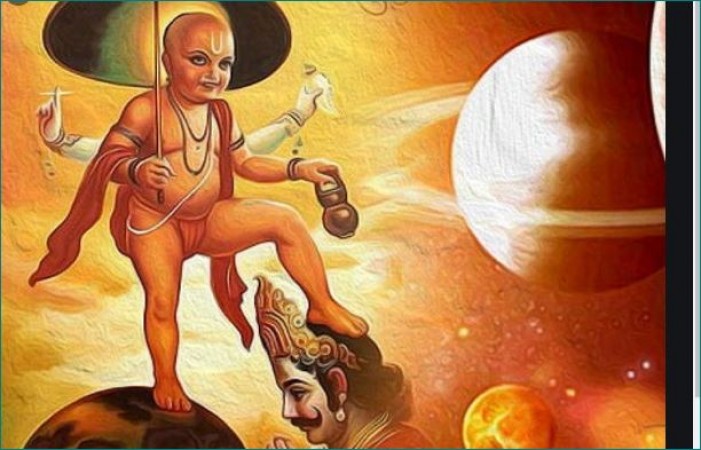 Vamana Katha - According to Srimad Bhagavadpuran, once the demons were defeated in the battle of the gods and they went towards Asthachal with the dead demons. The demon king Bali dies from Vajra. Then the demon Guru Shukracharya sacrificed his dead Sanjeevani Vidya and makes other demons alive and healthy. Shukracharya conducts a yagya for King Bali and gets divine arrows and impenetrable armour from the fire and the Asura army invades Amravati.

Seeing the demon army coming, Devraj Indra understands that this time he will not be able to face the Asuras and hence the gods run away. Heaven becomes the capital of the demons. Then Shukracharya conducts a hundred Ashwamedha Yagya for the immovable kingdom on King Bali's Amravati. Indra is aware of the desire of King Bali that no one can expel him from heaven after the completion of hundred sacrifices of King Bali.

Therefore Indra goes to Lord Vishnu and Lord Vishnu assures Indra of help. Then Lord Vishnu promises to be born in the Vamana form from Aditi's womb. At the behest of Kashyap Ji, Mata Aditi performs the ritual of payowrat which is for getting a son. Then on the day of Shukla Paksha of Bhadrapada month, the Lord appears from the womb of Aditi and incarnates and takes the form of Brahmachari Brahmin. Maharishi Kashyapa performs his Upanayana rites with the sages. Vamana was given Maharishi Pulak Yajnopaveet, Agastya gave Mrigacharm, Surya gave Chhatra, Bhrigu Khadau, Saraswati gave Rudraksha Mala and Kubera gave alms. After that, Lord Vamana goes to Bali with the permission of father. King Bali is performing the last yagya on the north bank of river Narmada. Vamana approaches King Bali. King Bali looks at Vaman and asks, 'Who are you?' Vamana then answers that 'We are Brahmins'. Bali then questions 'Where are you living?'

"This is complete brahmacruti, that is our abode." Vamana answers. Hearing this, King Bali thought that just as everyone lives in the universe, so does this Brahmin. Then Bali asks - 'Who is your Nath?' 'We all have our Nath, we have no Nath'. Vamana answers. The king thinks that his parents may have died. Then the king again asks - 'Who is your father?' Vamana replies that 'I do not remember the father, that is, we have no father, we are the father of all'. Bali asks, 'What do you want from me?' Vamana asks for alms from him. Bali is surprised that Vamana's three steps are very small. He say this is very little. Vamana says that with this I feel the three worlds, that is, I will measure the trilok in three steps. Shukracharya, the guru, prevents the sacrifice from being pledged, yet does not consider the sacrifice. Vamana measures all the people in one step and the whole earth in another, now there is no place to keep the third step. The problem arises in front of Bali, how do he keep their word?

Then he turn his head forward. God does exactly that and orders the sacrifice to remain in the sutal lok. Bali gladly obey God's command. Pleased with this, Vishnu asks Bali to ask for a boon. On this, King Bali sacrifices asking God to stay in the divine world and Lord Vishnu, obeying his word, accept to be the gatekeeper of King Bali, who is later freed by asking Goddess Lakshmi.

Do these things according to weekdays to get success

Today's Horoscope: People of this zodiac should not take stress