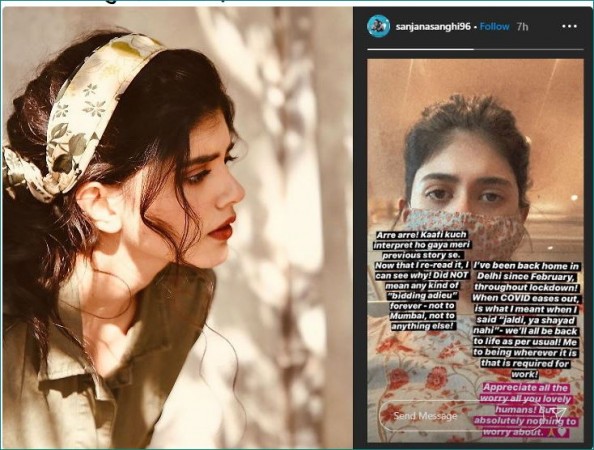 Sushant Singh Rajput who was known for his performances in Bollywood has recently committed suicide. The shocking news is coming about his last film co-star Sanjana Sanghi. She had recently shared a post in which she said that 'she is leaving the city of Mumbai'.

She shared a picture from Mumbai airport and with that picture she said that she is moving away from this city. Many of his fans were shocked after this post and the question was in everyone's mind that 'Are young actress Sanjana really leaving the industry'.Sanjana has given clarification in her Instagram story so that the fans of the actress can be happy. She wrote in her story, Arre arre! Kaafi kuch interpret ho gay meri previous story se. Now that I re-read it, I can see why! Did NOT mean any king of “bidding adieu” forever – not to Mumbai, not to anything else!” . She further said that when the situation in Corona gets a little better, then we will all move forward according to life. I will also go to every place where I will get work as an actor. I am thankful for all your concerns but you people do not have to worry.

Sanjana had filed her statement in the case of Sushant Singh Rajput Suicide at Bandra Police Station and only after that she posted about leaving Mumbai which shocked everyone. Talk about her film 'Dil Bechara' is going to be released on OTT platform Disney Hotstar and its release date is July 24.

Saroj Khan started her career at age12 with doctor's help