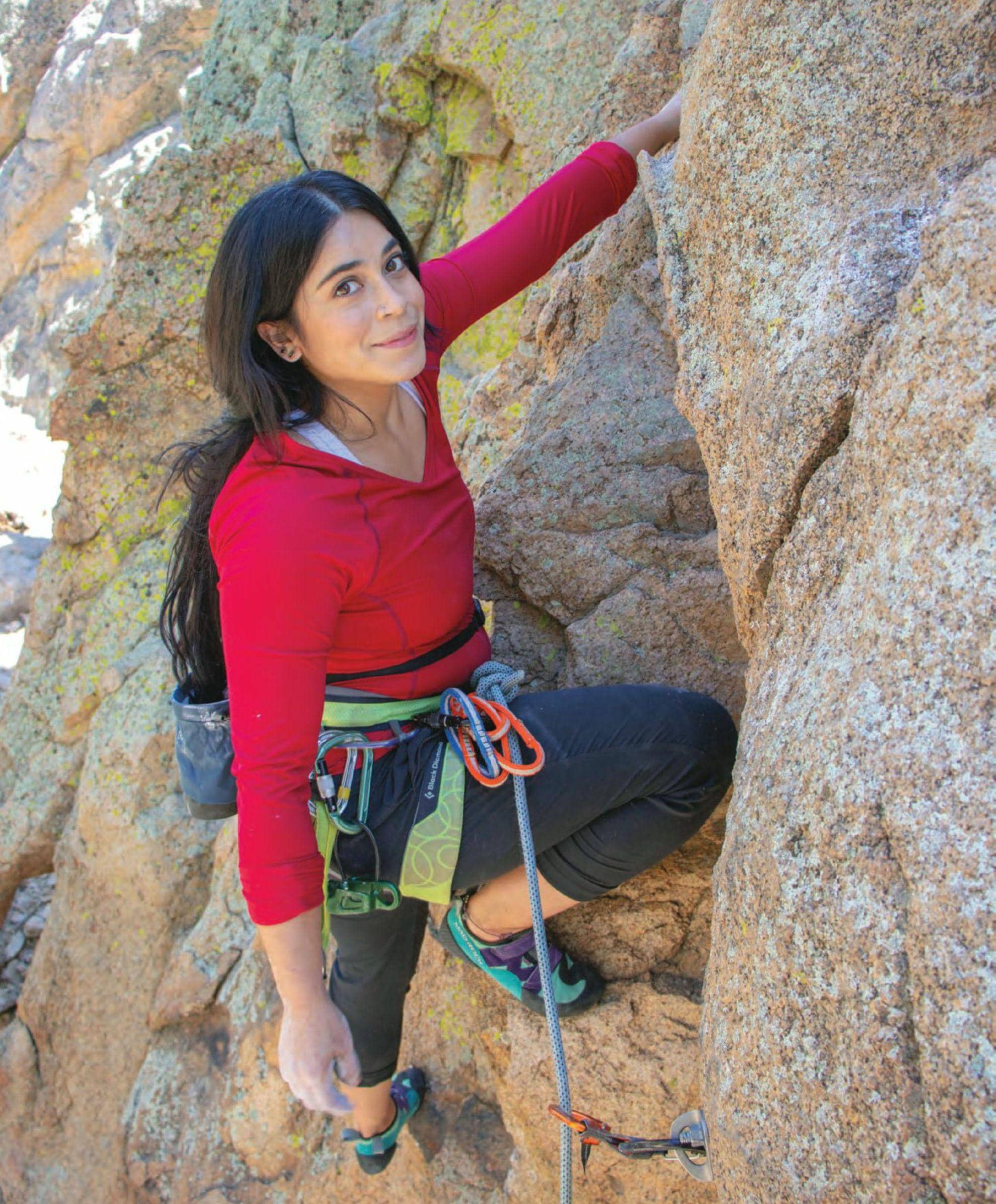 MARICELA ROSALES HAD EVERYTHING AGAINST HER. SHE BECAME A CLIMBER ANYWAY.

CHARLIE LIEU
ON A STARLESS SPRING NIGHT IN 1999, a 9-year-old girl opened her window, popped the screen, and swung her legs out. Brushing against the siding, she watched large flakes of peeling paint fall 15 feet to the ground. “This is it,” she muttered. “Now or never.”

Diagnosed with scoliosis two years prior, Maricela “Marci” Rosales had been periodically bedridden. While a back brace hindered her mobility, it was not the greatest limitation to her exploration. Since their neighborhood bordered Los Angeles’s housing projects, where drugs, gangs and stray bullets posed ever-present dangers, Marci’s parents enforced strict rules about when she could leave the twobedroom unit they shared with Marci, her brother, her sister, a nephew and a great uncle.

The moldy, dilapidated structure that sheltered Marci felt like her prison at times; the brace that supported her back, her shackle. She found solace thumbing through second-hand copies of National Geographic her father had bought for pennies at estate sales. Losing herself in images of faraway lands, Marci longed to see the world from all its angles.

From her windowsill perspective, Marci surveyed the landscape: the neighbor’s old trailer and a skeleton of a garage, charred black from a long-ago fire, loomed across the driveway. Just then, a distant shot rang out, and like a runner at the starting line, she was off. Marci manteled out and stemmed between the roof, the wall and a tree to land below her window.

As she ran across the tiny patch of grass adjoining the house, Marci imagined having just descended a mountain, and traversing an alpine meadow like the adventurers she had seen smiling on the magazine pages. As quickly as she escaped, though, Marci was yanked back by her father.

“I don’t know how he knew,” says Rosales, now 30, “but he always caught me doing things I wasn’t supposed to.”

The stunt earned her a spanking, but Marci knew her father was just glad she was safe. The adventure seemed worth it, but something else became clear: Marci’s reality had no mountains or meadows intertwined with wispy fog. It was concrete and freeways choked by smog.

“Nature was something reserved for people with means ... not for brown girls in the inner city,” Rosales says. “The idea that people actually climb to the top of mountains fascinated me, but it was so far outside my reality ... I just forgot about it.”

KENJI HAROUTUNIAN, director of California Outdoor Recreation Partners, who has mentored Rosales since 2015, marvels that she managed to find rock climbing. “Her background meant the odds were stacked against her before she got out of the gate,” he says.

Beyond the lack of economic resources, Marci faced another major obstacle. While outdoor recreation by Latinx is at an all-time high, based on data from the 2019 Outdoor Participation Survey, it was historically not part of the culture. No data existed for the 1990s, when Rosales was a child, but just 24 percent of Latinx responded that they participated in some form of outdoor recreation in 2010, compared to 44 percent today. The lack of participation is particularly dramatic in first-generation Latinx populations.

In the Puerto Rican culture in which Marci was raised, the barrier is especially high for women.

“We didn’t know people who climb rocks,” says Gladys Rosales, Marci’s mother. “I get my daughter like to go outside … She is, how do you say, terca [stubborn]. In our culture, wilderness is for men. Women belong at home, away from danger.”

Add scoliosis to the mix and the obstacles to climbing seem almost insurmountable. The severity of her condition and the lack of access to proper treatment left Rosales struggling with basic activities. When talking about her scoliosis, she still grimaces. “My bones felt like they were coming out of my skin,” she says. “There were days the pain was so intense I couldn’t get out of bed, I couldn’t go to school, so doing sports was impossible.”

Despite missing school, and her father’s cancer diagnosis during her junior year of high school, Marci kept her grades up. Intent on an education, she applied for grants and took out loans to enroll at the University of California, Riverside (UCR) after graduating from high school in 2007.

Yet at UCR she grappled with social integration as well as the rigor of college academics while trying to maintain connections to her family and fiancé back home. After the end of her first quarter, she and her fiancé ended their half-decade relationship. The resulting void sent Rosales into a maze of doubt, but also gave her space to explore the person she wanted to be.

In the spring of 2008, a dorm mate invited Rosales to try out the school’s climbing wall. At age 18, she was 5-foot-2 and over 200 pounds, but Rosales accepted because she wanted to be more social and try new things.

Looking up at the wall, she thought, “Wow, I’m supposed to get up there?” Still, she tried, which impressed Adaly Soriano, a high-school friend who joined the group at the wall.