The Importance of Donald Trump 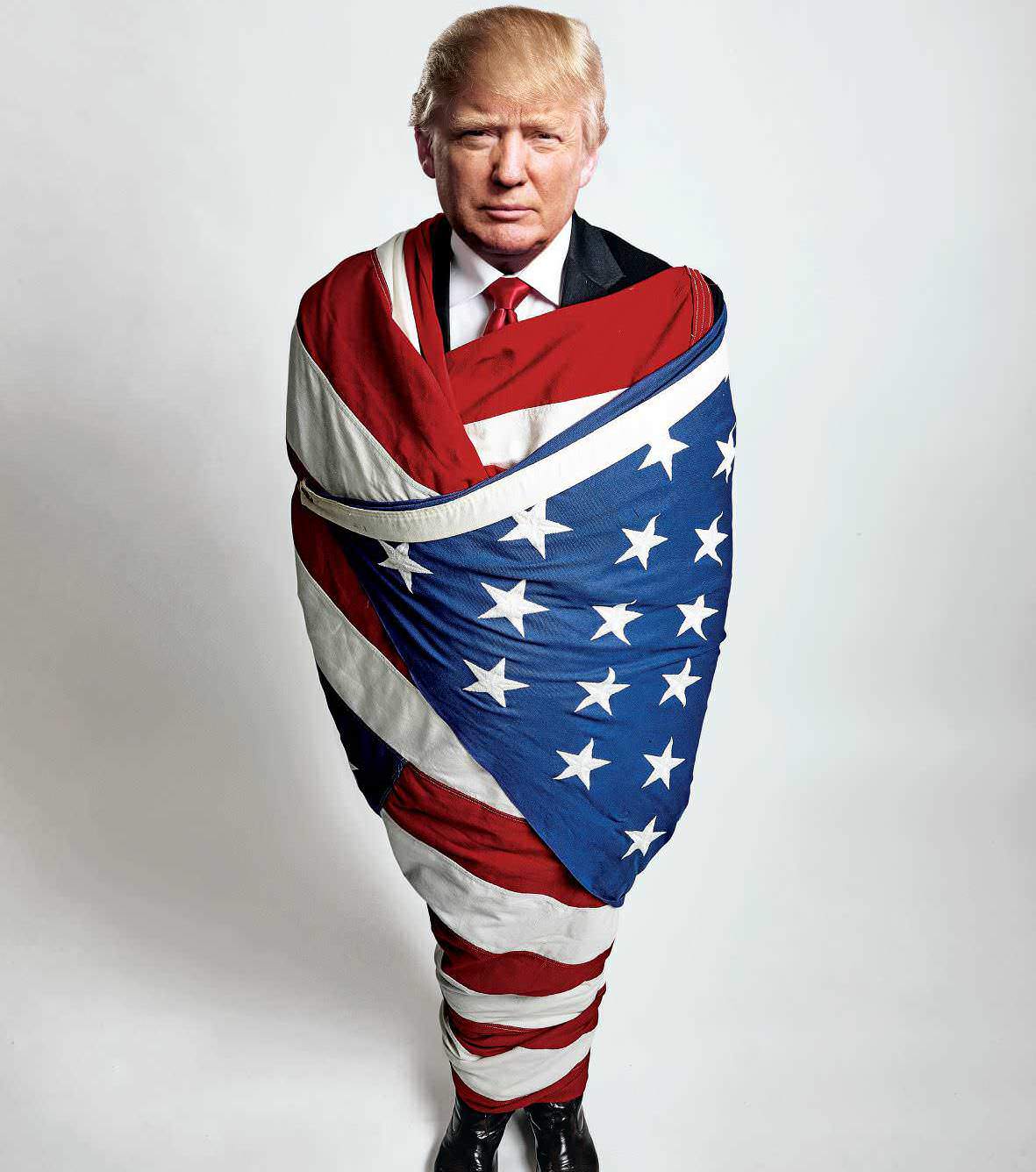 Far from destroying our democracy, he's exposing all its phoniness and corruption in ways as serious as he is not. And changing it in the process.

As the summer of Donald Trump came to its end—and the prospect of a springtime for Trump no longer seemed like a gag—the quest to explain the billionaire’s runaway clown car went into overdrive. How could a crass, bigoted bully with a narcissistic-personality disorder and policy views bordering on gibberish “defy political gravity,” dominate the national stage, make monkeys out of pundits and pollsters, and pose an existential threat to one of America’s two major parties?

Of course, it was the news media’s fault: The Washington Post charted the correlation between Trump’s national polling numbers and his disproportionate press coverage. Or maybe the public was to blame: Op-ed writers dusted off their sermons about Americans’ childish infatuation with celebrities and reality television. Or perhaps Trump was just the GOP’s answer to the “outsider” Bernie Sanders—even though Sanders, unlike Trump, has a coherent ideology and has spent nearly a quarter century of his so-called outsider’s career in Congress. Still others riffled through historical precedents, from the third-party run of the cranky billionaire Ross Perot back to Huey Long and Father Charles Coughlin, the radio-savvy populist demagogues of the Great Depression. Or might Trump be the reincarnation of Joseph McCarthy (per the Times’ Thomas Friedman), Hugo Chávez (the Wall Street Journal’s Bret Stephens), or that avatar of white-racist resentment, George Wallace (George Will)? The historian Richard Hofstadter’s Goldwater-era essay on “the paranoid style” in American politics was once again in vogue.

In the midst of all the hand-wringing from conservatives and liberals alike, Politico convened a panel of historians to adjudicate. Two authoritative chroniclers of 20th-century American populism and race, Alan Brinkley of Columbia and David Blight of Yale, dismissed the parallels. Brinkley, the author of the definitive book on Long and Coughlin (Voices of Protest), said Trump was a first in American politics, a presidential candidate with no “belief system other than the certainty that anything he says is right.” Blight said Trump’s “real antecedents are in Mark Twain”—in other words, fictional characters, and funny ones.

There is indeed a lighter way to look at Trump’s rise and his impact on the country. Far from being an apocalyptic harbinger of the end-times, it’s possible that his buffoonery poses no lasting danger. Quite the contrary: His unexpected monopoly of center stage may well be the best thing to happen to our politics since the arrival of Barack Obama.

In the short time since Trump declared his candidacy, he has performed a public service by exposing, however crudely and at times inadvertently, the posturings of both the Republicans and the Democrats and the foolishness and obsolescence of much of the political culture they share. He is, as many say, making a mockery of the entire political process with his bull-in-a-china-shop antics. But the mockery in this case may be overdue, highly warranted, and ultimately a spur to reform rather than the crime against civic order that has scandalized those who see him, in the words of the former George W. Bush speechwriter Michael Gerson, as “dangerous to democracy.”

Trump may be injecting American democracy with steroids. No one, after all, is arguing that the debates among the GOP presidential contenders would be drawing remotely their Game of Thrones-scale audiences if the marquee stars were Jeb Bush and Scott Walker. When most of the field minus Trump—appeared ahead of the first debate at a New Hampshire forum broadcast on C-span, it caused little more stir than a soporific pageant of congressional backbenchers addressing the empty floor of the House. Without Trump, even a relatively tame Trump, would anyone have sat through even a third of the three-hour-plus trainwreck that CNN passed off as the second debate?

What has made him more entertaining than his peers is not his superficial similarities to any historical analogues or his shopworn celebrity. His passport to political stardom has been his uncanny resemblance to a provocative fictional comic archetype that has been an invigorating staple of American movies since Vietnam and Watergate ushered in wholesale disillusionment with Washington four decades ago. That character is a direct descendant of Twain’s 19th-century confidence men: the unhinged charlatan who decides to blow up the system by running for office— often the presidency—on a platform of outrageous pronouncements and boorish behavior. Trump has taken that role, the antithesis of the idealist politicians enshrined by Frank Capra and Aaron Sorkin, and run with it. He bestrides our current political landscape like the reincarnation not of Joe McCarthy (that would be Ted Cruz) but of Jay Billington Bulworth.

Trump’s shenanigans sometimes seem to be lifted directly from the eponymous 1998 movie, in which Warren Beatty plays a senator from California who abandons his scripted bromides to take up harsh truthtelling in rap: “Wells Fargo and Citibank, you’re really very dear / Loan billions to Mexico and never have to fear / ’Cause taxpayers take it in the rear.” Bulworth insults the moderators of a television debate, addresses his Hollywood donors as “big Jews,” and infuriates a black constituent by telling her he’ll ignore her unless she shells out to his campaign. Larry King, cast as himself, books him on his show because “people are sick and tired of all this baloney” and crave an unplugged politician who calls Washington “a disaster.”

Trump also sounds like Hal Phillip Walker, the unseen candidate of the “Replacement Party” whose campaign aphorisms percolate throughout Robert Altman’s post-Watergate state-of-the-union comic epic, Nashville (1975). His platform includes eliminating farm subsides, taxing churches, banning lawyers from government, and jettisoning the national anthem because “nobody knows the words, nobody can sing it, nobody understands it.” (Francis Scott Key was a lawyer.) In résumé and beliefs, Trump is even closer to the insurgent candidate played by Tim Robbins and reviled as “a crypto-fascist clown” in the mockumentary Bob Roberts (1992)—a self-congratulatory right-wing Wall Street success story, beauty-pageant aficionado, and folksinging star whose emblematic song is titled “Retake America.” Give Trump time, and we may yet find him quoting the accidental president played by Chris Rock in Head of State (2003): “If America was a woman, she would be a big-tittied woman. Everybody loves a big-tittied woman!”

Thanks to Trump, this character has leaped off the screen into real life, like the Hollywood leading man in Woody Allen’s The Purple Rose of Cairo. As a human torpedo blasting through the 2016 campaign, Trump can inflict more damage, satirical and otherwise, than any fictional prototype ever could. In his great comic novel of 1959, The Magic Christian, Terry Southern anticipated just the kind of ruckus a Trump could make. Southern’s protagonist is a billionaire named Guy Grand who spends his fortune on elaborate pranks to disrupt almost every sector of American life—law enforcement, advertising, newspapers, movies, television, sports, the space program. Like Trump, he operates on the premise that everyone can be bought. In one typical venture, he pays the actor playing “an amiable old physician” on a live network medical drama a million bucks to stop in mid-surgery and tell the audience that if he speaks “one more line of this drivel,” he’ll “vomit right into that incision I’ve made.” The network, FCC, and press go into a tizzy until viewers, hoping to see more such outrages, start rewarding the show with record ratings.

There have already been some modest precedents for Trump’s real-life prank— most recently, Stephen Colbert, who staged a brief stunt run for president in 2007. The comic Pat Paulsen, a Smothers Brothers acolyte, ran for president intermittently from 1968 into the ’90s, aiming to call attention to the absurdity of politics. His first run was under the banner of the stag (Straight Talking American Government) Party; later, he ran consecutively as a Republican and a Democrat. (“I like to mix it up,” he explained.) Paulsen came in a (very) distant second to Bill Clinton in the 1996 New Hampshire primary, one of four primaries where he qualified for the ballot that year. But a judge threw him off the ballot in California, declaring, “I do not want to reduce the campaign for an important office like president of the United States to some kind of farce.”

Some kind of farce, nonetheless, is just what the modern presidential campaign has devolved into. By calling attention to that sorry state of affairs 24/7, Trump’s impersonation of a crypto-fascist clown is delivering the most persuasively bipartisan message of 2016.

Trump lacks the comic chops of a Colbert or Paulsen, and, unlike the screenwriters of movies like Bulworth and Nashville, he is witless. His instrument of humor is the bitch-slap, blunt and cruel—Don Rickles dumbed down to the schoolyard. But when he hits a worthy target and exerts himself beyond his usual repertoire of lazy epithets (Loser! Dope! Slob!), he is funny, in part because his one-liners have the ring of truth. When Eric Cantor endorsed Jeb Bush, Trump asked, “Who wants the endorsement of a guy who lost in perhaps the greatest upset in the history of Congress?” When Trump’s presidential rivals attended a David and Charles Koch retreat, he tweeted: “I wish good luck to all of the Republican candidates that traveled to California to beg for money etc. from the Koch brothers. Puppets?” Twitter inspires his best material, as does Bush. Among Trump’s many Bush put-downs is this classic: “Why would you pay a man $1.3 million a year for a no-show job at Lehman Brothers—which, when it folded, almost took the world with it?” The exclamation point in Bush’s sad campaign logo, Jeb!, has effectively been downsized to a semicolon by Trump’s insistence on affixing the modifier “low-energy” to his name every chance he gets.