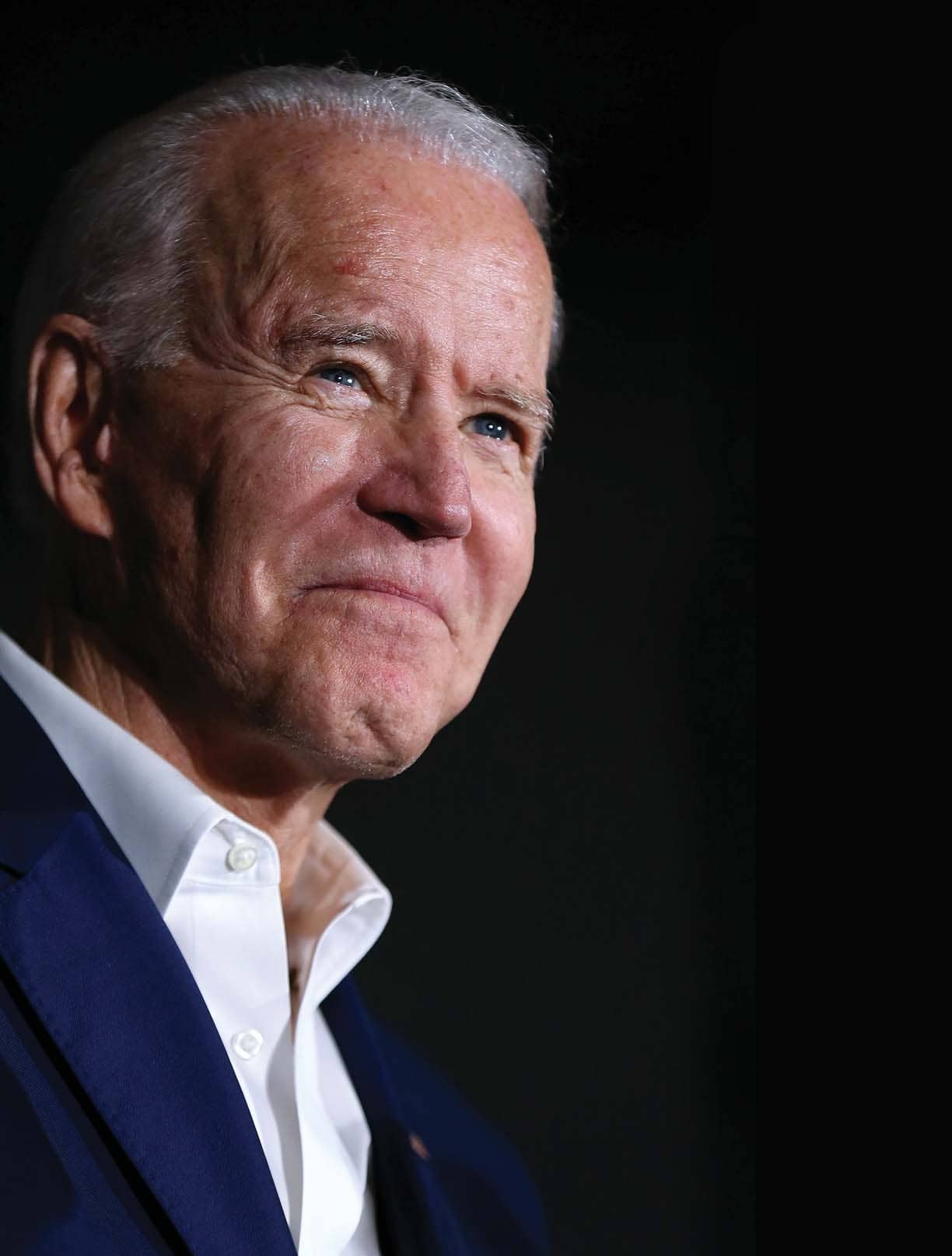 TWO WEEKS BEFORE ordinary American life was completely upended by COVID-19, Joe Biden had effectively captured the Democratic primary nomination with a campaign that amounted to a single promise: a return to normalcy.

In his 2019 announcement speech, Biden had emphasized national unity and “common purpose.” He wanted to defeat President Donald Trump and move past the polarized squabbling and dysfunctional governance that had become the norm under his administration. “Our politics have become so mean, so petty, so negative, so partisan, so angry, and so unproductive,” he said. “So unproductive. Instead of debating our opponents, we demonize them. Instead of questioning judgments, we question their motives. Instead of listening, we shout. Politics is pulling us apart.”

A year later, after consolidating his lead on Super Tuesday, Biden delivered an exuberant victory speech in Philadelphia, promising to unite his own party and defeat Trump. As he had throughout his campaign, he offered a nostalgic appeal to a shared identity, to national values and character. “Folks,” he said, “we just have to remember who we are.” More than anything else, he wanted to get back to the way things used to be.

Officially, Biden hadn’t yet clinched the nomination at that point: His chief antagonist, Sen. Bernie Sanders (I–Vt.), would remain in the race for another month, continuing to attack the former vice president as insufficiently committed to the socialist revolution he thought was necessary to fight the virus. But Biden had won a commanding lead where it counted, in the race for convention delegates. Just weeks before, Sanders had looked like a shoo-in. But after the votes were cast in South Carolina and on Super Tuesday, the Vermont socialist didn’t have a chance.

The primary had been a slog featuring more than 20 candidates, and at various points several had looked like plausible winners. But in the end, it was probably inevitable that it would come down to the two men who initially led the polls, and who represented the twin poles between which the increasingly divided party existed.

At one end was the cranky, consistent, discontented democratic socialist: Sanders, an independent, was an outsider within the party he sought to lead, a committed ideologue with fervent policy preferences. A lifelong critic of the milquetoast Democratic establishment and its get-along tendencies, he campaigned on revolution, on an overthrow of the current order.

Biden, in contrast, was the ultimate party insider, a man first elected to the Senate at the tender age of 29 who had weathered life-altering tragedy and controversy from within its shelter. He had policy views, but mostly he championed compromise and bipartisan deal-making. Over the course of more than 40 years in politics, Biden had become a kind of avatar of the Democratic Party, the figurehead of its establishment.

The primary race had been a contest between the Democratic Party’s biggest champion and its most prominent critic on the left—and the party champion had emerged victorious.

The 2020 primary race was a contest between the Democratic Party’s biggest champion and its most prominent critic on the left.

Looked at one way, Biden had won not only the primary race but an intraparty argument over its future. There would be no revolution. Socialism would be held at bay. The establishment would continue its reign. Everything would return to normal. That was the promise.

Looked at another way, however, Biden’s win was far from decisive, less a clear victory over the forces of socialism and more a temporary stalling measure that accepted a lethargic version of the Democratic Party’s leftward demographic trajectory and bought into many of the underlying assumptions of democratic socialism, if not the explicit label. Sanders appeared to have lost the race, but he may have won the better part of the argument—and the future of the party.

And then there was the coronavirus, which originated in China at the end of 2019 and began wreaking havoc on the American economy just as Biden settled into his role as the presumptive Democratic nominee. The pandemic arguably elevated Biden’s appeals to competence, stability, and good governance. But it also threatened to undermine the central argument of Biden’s blandly nostalgic campaign.

For in a world of unprecedented uncertainty, with the global economy hushed by a pandemic, what would it mean to return to normal?

EVEN BEFORE IT started, the Democratic primary looked like a two-man race. And that race neatly illustrated the party’s essential divide between establishment continuity and socialist revolution.

In the early months of 2019, polls showed Biden with a clear lead among Democratic voters, which, if nothing else, reflected the former vice president’s strong name recognition. The question was whether name recognition alone would be enough.

Biden had run for the nomination twice before, in 1988 and 2008. Both times he had flopped, dropping out after a plagiarism scandal in the first race and after a dismal fourth-place finish in Iowa in the second. In 2019, after four decades in Democratic politics, Biden was broadly liked and even admired by many in the party. But his support lacked intensity, and relative newcomers such as South Bend, Indiana, Mayor Pete Buttigieg and Sens. Kamala Harris (D–Calif.) and Elizabeth Warren (D–Mass.) challenged his command of the party faithful in different ways.

Sanders had the opposite problem. He had proven a surprisingly strong opponent against Hillary Clinton in 2016, and he had amassed a base of almost fanatically devoted supporters who shared his critique of the party establishment. But those fans had also gained a reputation for hostility, even and especially toward his Democratic rivals, making him a polarizing choice. For Sanders, then, the challenge was breaking out of his own bubble of fandom.

Yet Sanders had a model in the similarly polarizing, similarly noxious 2016 campaign of President Donald Trump.

In the run-up to the race, Sanders’ team was blunt about the way his strategy echoed Trump’s. A 2018 profile in New York summarized the approach as follows: “Facing what’s likely to be a historically large field, he’s been told, Sanders could start with his most loyal supporters from last time and go for a tight plurality victory in Iowa’s caucuses, followed by a slightly bigger one in New Hampshire’s primary. From there, advisers hope, his numbers could grow as the field dwindles.”

Like Trump, Sanders was a rabble-rousing populist, an antiestablishmentarian who inspired devotees dissatisfied with the political status quo. Like Trump, he planned to win by exploiting pre-existing intraparty divisions and a particularly crowded field. And like Trump, Sanders would soon expose the deep rifts within his own party in the process.

Sanders was running as a democratic socialist who favored massive expansions of federal welfare and entitlement programs that went far beyond the party consensus. He found his strongest support among those frustrated by that consensus and the limits it imposed on them.

The intensity of the divisions exposed by his campaign suggested that the Democratic Party wasn’t really one party. It was two, divided largely by age and, to a lesser extent, education.