To Infinity... and Beyond! 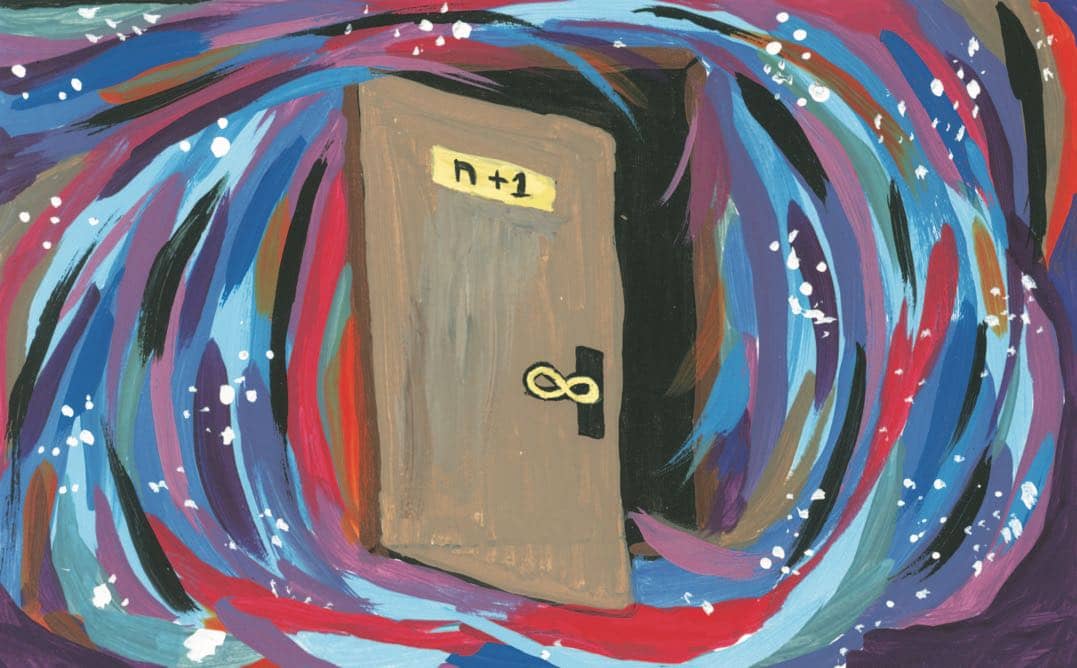 Owain Griffin takes a leap beyond the limits of numbers, into concepts.

Anyone who’s spent time around young children knows that inevitably, they will try to out-do each other. It usually doesn’t matter what the subject of the argu-ment actually is, only who gets the last word. In order to win this contest, children usually invoke mathematics:

This then continues back and forth with each party one-upping the other with a new, larger number. The problem with this method is that, as we know, you can always find a bigger number and so the argument seems to have no end. That is until one little know-it-all uses this fact to their advantage:

“Whatever you say plus one!” proudly exclaims Child #1. This seemingly childlike manoeuvre has obvious and pro found mathematical power; quite simply, any response his opponent could give will always be quite literally ‘one-upped’ with no effort. I think we know who is winning the argument now.

So far nothing too confounding has happened in the argument. That is until the other child tries to escape their loss by saying: “Well I’m INFINITY coolest,” (although this is not a grammatically correct sentence, we’ll let it slide).

At this point something interesting has occurred. We all know there is no end point to the sequence of numbers, but in order to get the last word in the disagreement this child has somehow managed to get around this fact by talking about the totality of the sequence itself, rather than any of the members of that sequence. But infinity is confusing. Is it a number? Is it a concept? At the very least, it seems like something worth philosophising about.

Let’s start by considering how we conceptualise infinity. Usually when discussing the infinite, I am met with incredulity. Surely ‘infinity’ is just the biggest thing possible? Any talk about the ‘mathematics of infinity’ is nonsense because mathematics concerns numbers and infinity is bigger than all the numbers! Not so. This may be a tempting position to take but unfortunately it isn’t wholly accurate. For one, mathematics is concerned with a lot more than just numbers. Mathematicians also study points, lines, sequences, structures and concepts. This last addition to the list provides a more fruitful account of infinity: the infinite as a concept. It is here that the line between mathematics and philosophy begins to blur.

Mathematically speaking, we ought not to think of infinity as a number. Rather, it is a kind of number. Such infinite numbers are useful when considering and comparing unending quantities. ‘How could we possibly conceptualise infinite numbers?’ I hear you ask. To answer this, I will turn to a now famous example from the mathematician David Hilbert.

Imagine booking a holiday at Hilbert’s Hotel. This hotel is so popular that in order to accommodate all the guests who wish to stay there, it has an infinite number of rooms. To make matters worse, you’ve booked for the most popular time of the year, so all the rooms are currently full. If this were a regular hotel you’d be in serious trouble; all the rooms are full, so there’s nowhere for you to stay. Fortunately for you, the management at Hilbert’s Hotel are very accommodating, and rather than turn you away, they simply move every guest in the hotel from their current room to the one next door. The occupant of Room 1 moves to Room 2, 2 to 3 and so on until every guest has moved from their current room n into the room next door, n+1. Thanks to the quick thinking of the hotel manager, Room 1 is now unoccupied and is ready for you to enjoy your holiday. By using this technique, any finite number of people can be given individual rooms in the hotel even though it is already full! Just don’t expect a good night’s sleep, as you’ll have to change rooms every time there’s a new arrival.