Processing Can Triple The Income From Mangosteen 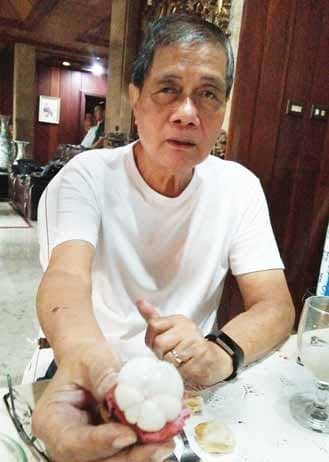 Producing Mangosteen for the fresh fruit market is profitable enough, but processing the fruits, as well as the leaves and other parts of the tree, can increase income as much as three times or more.

That’s what we learned from talking to the pioneer grower, researcher, and processor of high-value mangosteen products on August 16, 2019. The fellow is Dr. Alfredo Villarico, 75, who probably has the biggest mangosteen plantation in the country today. He has two farms totaling 32 hectares in Kidapawan City, North Cotabato, and 130 hectares in Aborlan, Palawan. Fifty hectares have already been planted in Palawan, and planting is ongoing.

He said that last year (2018), he harvested 120 tons of fruits in Kidapawan. If everything were sold as fresh fruit, the gross income could easily be R6 million. But if the fruits and other parts of the tree were processed into several byproducts, the income could be easily tripled. He explained that the processed byproducts from one hectare could be worth more than the fresh fruits harvested from three hectares. Among the processed mangosteen products are capsules as a food supplement, mangosteen tea, mangosteen and coffee mix (three types), jam, mangosteen choco, and two kinds of mangosteen soap.

Dr. Villarico, a medical doctor, was the first in the Philippines to develop a capsule out of powdered mangosteen pericarp, which he believes has health benefits. He explained that the fruit’s pericarp, or hard shell, contains xanthone and other active ingredients that can help relieve patients of their ailments.

Dr. Villarico said that xanthone has anti-inflammatory properties. Whenever a person contracts a disease or is hurt, inflammation occurs. It is the function of xanthone to proceed to the affected area to check the inflammation. Xanthone works together with other active ingredients found in the fruit and other parts of the mangosteen tree.