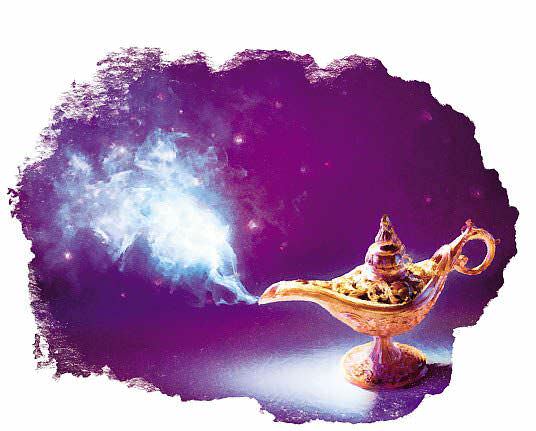 The genie was waiting – and Daisy had some thinking to do!

DAISY found it buried in the woods. She almost missed it, until Bailey wouldn’t go back on his lead. Chasing him around a small patch of scrub, she stubbed her toe on something hard protruding from the ground.

At first she took it for a stone. But no, it shone! She could see the gleam of its silvery-bronze metal from where she stood.

Intrigued, she left her dog to sniff out a squirrel or whatever he was doing, and bent down, knees creaking, to brush away some of the dirt.

It would be a tin can, no doubt, or some old flask long since rotted away. Still, the child inside her couldn’t help but remember days gone by, when she’d hunted in these same woods for treasure that pirates had buried here. Though her treasure hunting days were 30 years ago or more, she grabbed a sharp stick and began poking away at the earth until it loosened.

More of the object was revealed. It wasn’t a tin can or a flask.

There was a long, ornate lid, for one thing, with a knob on top. It reminded her of something, though she couldn’t say quite what. Excited, Daisy dug with more effort, breaking the stick, then using her fingers until she had the soil around the object cleared and she could lift it out.

She almost laughed in delight at what it was. A lamp. An ornate lamp, in the Aladdin style. What a thing to find! She wondered what on earth it was doing there. It was really rather beautiful, and would make a great story to tell once she had polished it up and put it above her fireplace.

She fished out a dog poop bag and put the lamp in it, then fastened Bailey’s lead and headed home.

In the kitchen, she took out the lamp and stood it on the counter top. She attacked it with a damp cloth, washing away the dirt.

Not bad. It really was a beautiful object. She wondered whether she should hand it into the police. Maybe it had been stolen from a nearby house?

It looked as though it had been buried there for quite some time, though, so they would probably be unable to trace the owner by now, but she could try at least. It might have sentimental value.

She gazed at the lamp, transfixed by its loveliness. She’d get it clean first, then work out who to tell.

After cleaning away all the dirt, Daisy took out some brass polish and a dry cloth.

“Let’s have a good look at you,” she said, and with gusto she began buffing the lamp’s shiny curves.

A small plume of smoke emerged from the spout and Daisy leaped back, alarmed. Maybe it contained some dangerous fungal spores, or worse.

She hadn’t checked inside. What a fool she was! She watched, wide-eyed and alarmed, as the plume grew bigger and bigger, swelling and elongating, until it solidified into a man.

Nope. It was no good. Daisy was unable to finish that sentence. She wondered whether she’d fallen in the woods, knocked her head, and this was a rather exotic dream.

The dream man smiled at her.

“Who are you?” she cried. “How did you get in?” The man frowned and pointed to the lamp.