Now You See It 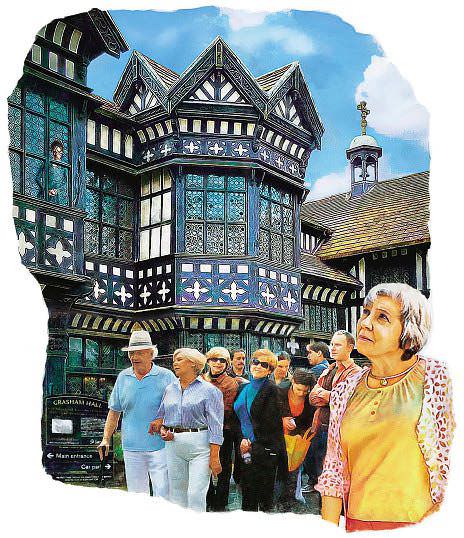 Legend had it the ghost only appeared to one person at a time. Who would be next?

CHERYL reckoned Grasham Hall was going to be her last day out with this bunch of old codgers. Granted, she was nearly seventy herself, but she still had a bit of oomph. Unlike this lot.

Last month, they went to a china-painting demonstration. It was OK, but Cheryl felt that when you’d seen one sprig of lilac painted on a cup, you’d seen ’em all.

There were still one or two coach tours on the summer schedule, but Cheryl would probably skip them.

Today was yet another stately home. The coach rumbled its way through 30 miles of sheep and trees before coming to a halt in front of another black and white timbered house.

Cheryl sighed. There would be art (tedious), a priest hole (too dim to see) and scones (never enough clotted cream).

They were shown round by a woman who said she was the head guide.

“Got any badges?” Cheryl shouted, receiving a few irritated looks.

Cheryl prided herself on her good sense of humour. In the kitchens she pretended to bite into the plastic fruits and a wax kipper (once again, the others were unimpressed – the miserable so-and-sos).

They trooped along a dark passage between rooms.

“Apologies for the lack of light just here,” the guide said. “We’re currently rewiring. The floor is uneven, so please take care. We are very careful with the safety of our visitors.”

A woman beside Cheryl spoke softly to her friend.

“They had a member of staff die on them last year.”

Cheryl tutted. “Why did we come, then?” she muttered. “Ruddy death traps.”