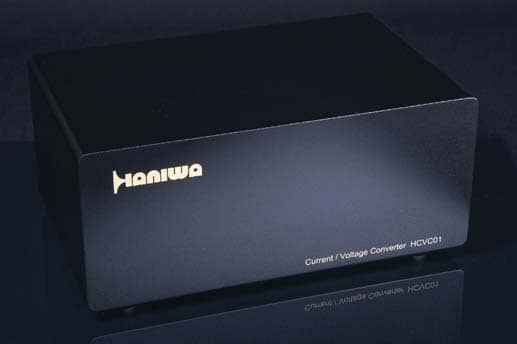 Lately, current amplification-based moving coil phono preamplifiers have gotten a great deal of well-deserved press. For years, Haniwa’s Dr. Kubo has been designing and selling super–low-internal-impedance cartridges because such cartridges work best with such devices. He has also been designing and selling his own current-amplification phono preamplifier; I recently reviewed one of each as part of Haniwa’s Vinyl Playback System, which consists of the player—a modified Transrotor supplied turntable—the HTAM01 tonearm, a modified ViV Lab Rigid Float tonearm; the HTCR-CO phono cartridge; and the HEQ-A03-C1 current-mode phono stage.

Here’s something new to Haniwa’s range and to hi-fi: the $6000 HCVC01 passive current-to-voltage converter. It’s analogous to a step-up transformer and is intended to feed your choice of moving-magnet phono preamplifiers. I don’t believe anyone has previously on the cartridge used) is claimed to be 10mV— about double that of your average MM cartridge. That’s maximum, so it should be fine for most MM phono preamps.

Here’s something new to Haniwa’s range and to hi-fi: the $6000 HCVC01 passive current-to-voltage converter. It’s analogous to a step-up transformer and is intended to feed your choice of moving-magnet phono preamplifiers. I don’t believe anyone has previously produced anything like this. It’s housed in a modestly sized, substantial metal chassis about 7.5” × 5” × 3.5”. On one side are a pair of XLR inputs, a pair of RCA outputs, and a banana jack ground lug. Maximum output voltage (depending on the cartridge used) is claimed to be 10mV— about double that of your average MM cartridge. That’s maximum, so it should be fine for most MM phono preamps.

I was sent one of those, along with a new version of the $10,000 HCTR- CO phono cartridge, which has the same model designation and looks very similar to its predecessor, which I wrote about in last October’s Analog Corner. The HCTR-CO is designed and built by Kubotek, whereas previous Haniwa cartridges were made by Y. Matsudaira, who makes cartridges for Air Tight and his own brand, My Sonic Lab. Buy ’em together—the HCVC01 and HCTR-CO—and save $2000.

The HCTR-CO has an internal impedance of 0.2 ohms—just 1/10th that of, say, Ortofon’s Anna D or Lyra’s Atlas Lambda SL. It’s almost a short circuit, which is what a current-based phono preamp wants to see.

The other thing that makes the HCTR-CO cartridge special is that it’s designed to track at a very low tracking force: 0.5–1.0gm “for general use” and 0.3–0.5gm when using the Haniwa “ThePlayer” and its tonearm. (The new HCTR-CO has higher compliance than the old—it’s now twice that of the Atlas Lambda, so you’d expect a low tracking force, but the specified VTF is nevertheless very low, especially when used with The- Player ’table.) According to Dr. Kubo, the current-loop circuit created by the low–internal-impedance cartridge and the HCVC01 together produces a powerful electromagnetic damping circuit that makes such low tracking forces possible.

Yes, the previous Haniwa was also called the HCTR-CO. Robert Bean, Haniwa’s business manager, says that after the newest version had been announced, he collected all the HCTR- COs already sold in the US, at Dr. Kubo’s request, and sent them back to Japan, where all were upgraded to the new design at no charge. Dr. Kubo felt that anyone spending $10K on a cartridge deserves the improved model, which has higher compliance and a new damper to match.

I installed the HCTR-CO in the SAT CF1-09 arm and set the tracking force for about a gram. Before playing music, I used the Ortofon test record to see if the cartridge could negotiate the 80μm test band at 1gm. That’s what the Ortofon Anna D is spec’d for—and delivers—at 2.4gm. Once I reduced the anti-skating force to compensate for the lower VTF, the HCTR-CO negotiated the 70μm band at 1gm, but 1.2-1.3gm was necessary to handle 80μm. That’s still the lowest moving coil cartridge VTF I’ve encountered.

Haniwa supplies adapter cables for use with any arm terminating in RCA jacks. Instead, I used custom Cardas RCA-to-XLR adapters that, in contrast to standard adapters, don’t tie pins 1 and 3 together, connecting pin 3 to ground and rendering every current-mode phono preamp I’ve ever tried uselessly. (All with XLR inputs, that is: The CH Precision P1 has both XLR and RCA inputs.) 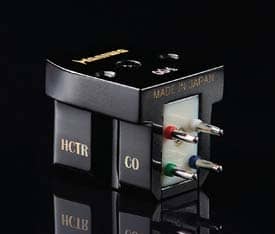 In general, MC phono cartridges with tiny internal impedances—including the HCTR-CO—produce tiny voltages but are capable (in a low-impedance circuit) of producing an abundant current—which leads us back to the HCVC01 current-to-voltage converter:

If you want to use a cartridge like the HCTR-CO with a standard voltage mode phono preamp, you need to put something in between.

But it’s more than that—it’s something new to audio. Which makes me very curious about what it will do to the sound.