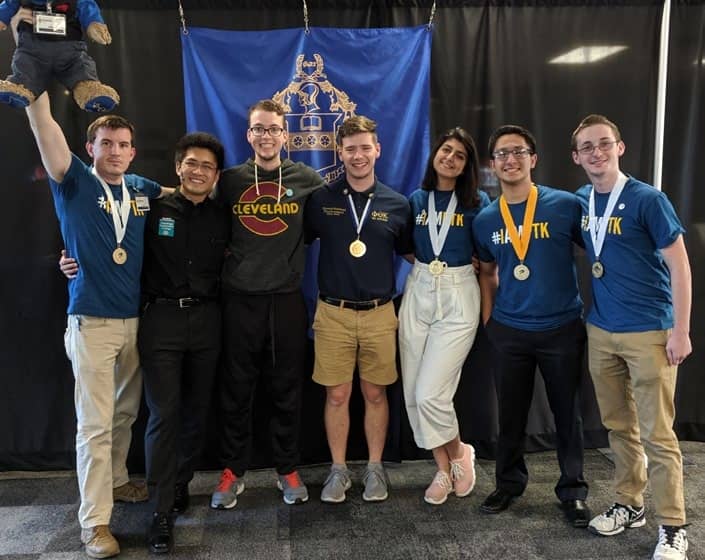 One of my favorite poems is “It Couldn’t Be Done,” by Edgar A. Guest. First published in 1917, the theme of the poem is to not fear to attempt something difficult and to not listen to naysayers telling you that something is impossible.

The poem highlights the importance of hard work and a positive attitude when faced with a difficult task. The second stanza lays this point out beautifully:

Somebody scoffed: “Oh, you’ll never do that; At least no one ever has done it;” But he took off his coat and he took off his hat And the first thing we knew he’d begun it. With a lift of his chin and a bit of a grin, Without any doubting or quiddit, He started to sing as he tackled the thing That couldn’t be done, and he did it.

The message has stuck with me since I memorized the poem as a boy and it comes crashing back whenever I happen to meet someone whose attitude and actions personify its theme. Someone, for example, like 23-year old Connor House of Sagamore, Ohio.

Connor is a young man who knows all about squaring up to life and meeting challenges with positivity, mindfulness, and hard work. Born with Klinefelter Syndrome, a rare genetic condition, Connor has learned to work longer and harder than others to achieve success in school and in information technology (IT).

While the syndrome has various aspects, the one that impacts Connor the most is auditory processing disorder (APD). “Basically, if I’m having a long conversation with someone or trying to listen in class for long periods, or reading a book, I may have a difficult time processing the information,” he explained.

Just because Connor may have difficulty processing information doesn’t mean he can’t do it — he is actually quite good at acquiring and internalizing new data, having researched and developed a number of techniques to deal with APD. He also lives by a creed called the “Path of Least Resistance” (PLR) a proactive philosophy of setting and achieving goals.

In its simplest terms, PLR means not just reacting to one’s circumstances, but rather working to improve one’s situation. The first step is to acknowledge things as they are, followed by deciding how you want things to be, followed by working to achieve those conditions.

When it comes to tackling a difficult job, Connor is thoroughly pragmatic. For example, although reading a lengthy book is not easy for him, he doesn’t bemoan the assignment — he dives right in. “Complaining gets me nowhere, because in the end the book must be read, so I might as well just read it,” he said.

The results of Connor’s efforts are thus far impressive. He just graduated — via a virtual convocation, of course — from Cuyahoga Community College in Ohio, with Associate of Applied Business degrees in cybersecurity and networking software, as well as an Associate of Applied Science degree in electronic engineering technology with a focus in network hardware.

Founded in 1963 and known colloquially as “Tri-C,” Cuyahoga Community College is Ohio’s first community college and it offers more than 1,000 credit courses in more than 190 career and technical programs and liberal arts curricula. A multi-campus institution, Tri-C ranks 1st in the state and 25th nationally in conferring associate degrees. They also have a really cool mascot, a Triceratops; hence their moniker.

In addition to graduating with an impressive 3.91 GPA, Connor earned three IT certifications: A+ from CompTIA, and PC Pro and Server Pro 2016: Networking from TestOut. He also garnered a boodle of what he calls “lesser” certifications like the Networking and Security Fundamentals credentials offered through the Microsoft Technology Associate (MTA) program. All in all, not bad for a guy for whom processing information doesn’t come easy.