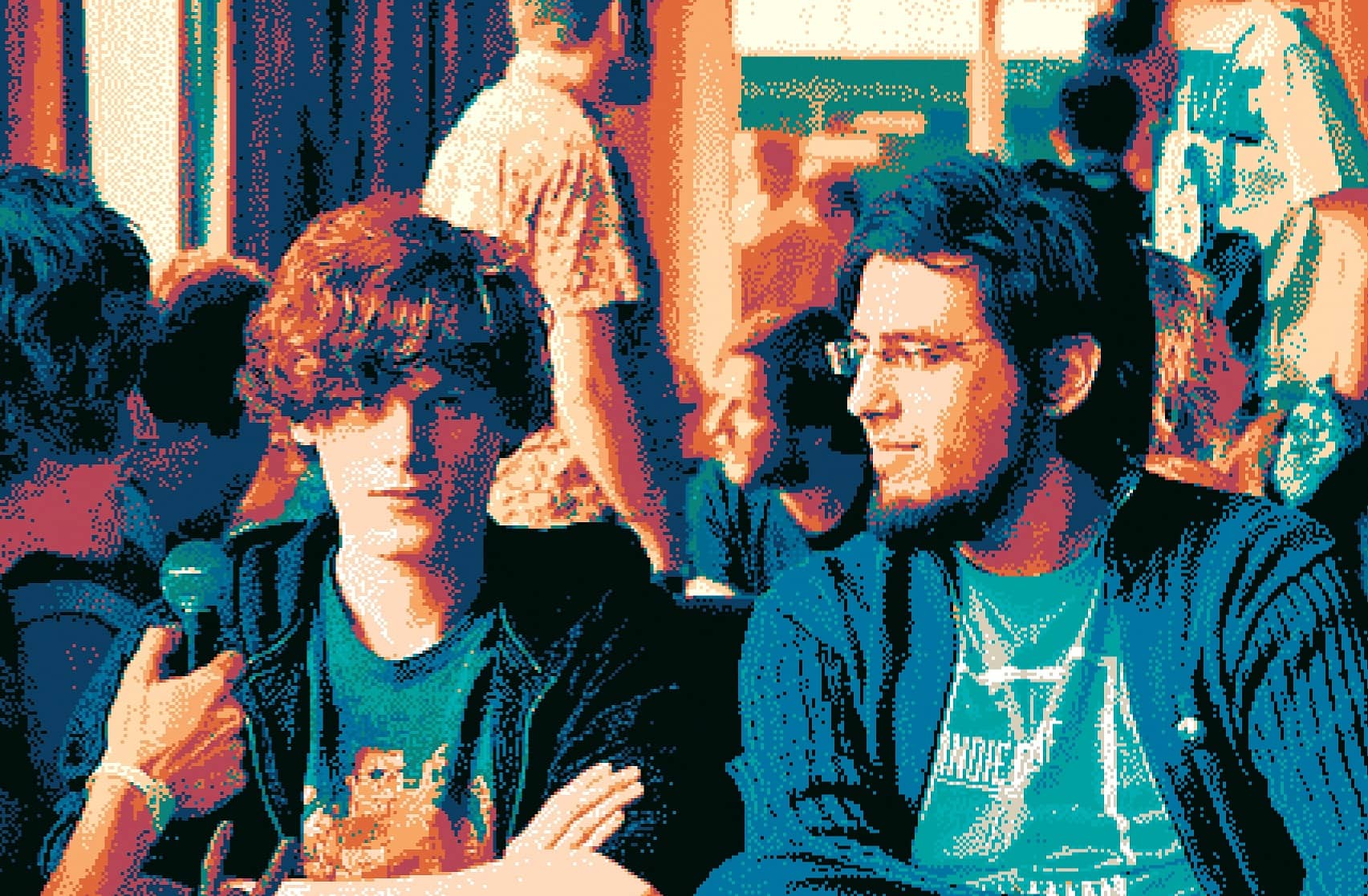 As they call time on indie studio Vlambeer, Rami Ismail and Jan Willem Nijman reflect on their remarkable ten-year journey

On September 1st 2020, Vlambeer celebrated its tenth anniversary by announcing its closure. It was, Rami Ismail points out, a quintessentially Vlambeer way to mark the milestone. “It’s very loud. It’s overly dramatic. It’s a little obnoxious, maybe? To say, ‘We’re ten years old! Also, we quit.’” Yet it’s a happy ending, too. Ismail and Jan Willem Nijman, Vlambeer’s two mismatched halves who have consistently managed to make their differences work to their advantage, are ready to move on. “Vlambeer was born of necessity,” Ismail continues. “And I think the end result is that JW and I grew enough that for us, it’s no longer needed. And it’s no longer needed for the industry around it. It did its job, you know? Let it sleep.”

Nijman and Ismail never had a tenyear plan. Not even close. In fact, when they decided to work together, both hoped that one or two games would make them enough money to go their separate ways. It was, as they cheerfully admit, a somewhat uneasy alliance right from the start. “Rami and I had this weird dynamic going on where we didn’t really like each other,” Nijman says, recalling his first memory of Ismail when the two were on a train to their game design course at the Utrecht School Of The Arts. “He was talking about working on this great indie game and it was 3D and it cost money. I was this 17-year-old who made freeware games and was super against triple-A. I heard him talking about this fancy game and I told him, ‘Dude, can you shut up? That’s not indie at all.’” But over the following two years, the two developed a grudging respect for one another. Ismail was ambitious, capable of managing teams, and getting projects off the ground. Nijman was the ideas man, churning out hundreds of tiny games, occasionally producing something with real promise.

Ismail recalls one particular example that impressed him, around a year before the two left school. “He convinced me to play a prototype of his called If You Really Want It, You Can Fly. It looked like all of his prototypes – very simple, clearly made in a day at best,” he says. (“I made it during a lunch break,” Nijman interrupts.) The game featured a small character standing atop a building. Pressing the spacebar would, in theory, make him fly. But each time Ismail pressed it, the man would fall and die, letting out a terrifying scream and leaving a huge impact crater. Ismail tried once more, this time holding the spacebar, and watched as the man flew into space and suffocated, again with a horrific sound effect to accompany his death. “JW was like, ‘No, no. You have to really want it,’ I’m like, ‘What the hell is this kid talking about?’ and so I just stared at this character and said, ‘Fly already, damn it!’ And then as soon as I thought that, he started flying! I had no idea what had just happened.”

Stunned, Ismail looked for some kind of secret trick. Had Nijman pressed a button somewhere, or used a wireless mouse to trigger the flight? The solution was much simpler. There was a hidden timer in the game: if there was no input for long enough, the character would automatically fly. “I got really frustrated that he had read me so well,” Ismail says. “After I got up, I mashed the spacebar in frustration, and as soon as I did, the character stopped flying and fell to his death anyway. JW had perfectly predicted the frustration arc that people would go through. It was unpolished enough that it needed JW standing behind you to explain what it is, and how it works. But that day I learned that JW is really good at game design, and has a knack of making things feel nice in a span of hours, whereas I was the kind of person who worked on game ideas for a year and a half.”

Nijman joined a team Ismail had assembled for a game project developed outside school hours. “It was incredibly ambitious,” Nijman says. It was basically a full-blown 3D space sim, that we were going to make with ten inexperienced students in six months.” At the time, just about every indie developer wanted to get its game onto Xbox Live Arcade, where smaller games were thriving. Ismail had managed to enter into negotiations with Microsoft about getting the game on the platform. “We had a nice visual style, a good musical identity, and the basic framework of movement in a videogame with some shooting,” he says. “But in gameplay terms, it was less than most of JW’s three-hour prototypes.” But before the team was in a position to land a deal with Microsoft, the school stepped in and prevented Ismail from negotiating further, claiming to own the rights to the game.

Being denied their moonshot was sufficient encouragement for the two to quit the course, having realised their different skillsets complemented one another perfectly. “JW had this community that challenged each other to make stuff quickly,” Ismail says. “And the main skill he got there is that he tried a lot of game ideas which inherently made him a better designer, and in trying to stand out meant he had to find really effective ways of making the game feel better. I think that trademark Vlambeer feel definitely comes from there. That’s JW.” Ismail, on the other hand, had a knack of taking nascent ideas and making them accessible, turning them into potential commercial products.

He could also help tidy up Nijman’s code. “If I had to describe JW’s coding style, this would not be a very polite article,” Ismail begins, before immediately abandoning any pretence of politeness. “There’s something to be said for just writing shit that works. With a big emphasis on the word ‘shit’. Because JW’s code was… I think it genuinely made grown programmers cry, like, two or three times in our career.” Nijman immediately shoots back: “That says more about programmers than my code.” Ismail frowns. “I think it’s a little bit of both. We can be a little stuck up, but some of the code was genuinely rubbish. One of my favourite anecdotes will forever be the time I was trying to port some of JW’s code, and there was a comment that said ‘Advanced math ahead’, and it was a sine wave which is probably one of the most basic mathematical properties in the world.” Warming to his theme, Ismail continues: “There was another time where the basic camera code was this seven-line monstrosity with every type of trigonometry in the world in there, just smashed together until it worked. It took me a day to turn it into an approximation of what he had written.” Nijman laughs. “Especially in the early days, we were a bit… well, you could compare it to a food truck where the food is really good, but you definitely don’t want to see the kitchen.” Quick as a flash, Ismail responds. “So in that case, I was the Food Inspection?”

The two continue their good-natured bickering as we ask about the game that transformed their fortunes. Whether or not Crates From Hell – later to be renamed Super Crate Box – had its single-crate spawns from the start is still a matter for debate between the two. The more important thing, Ismail eventually notes, is that Nijman’s original concept was desperately close to realising its potential, but wasn’t quite there. Ismail realised it was his job to convince his new business partner that, of all his game ideas, this was the one that would establish Vlambeer as a force to be reckoned with. “It felt special,” he says. “Most action games are about finding the right [weapon] and then using that until your ammo runs out. And JW took that away and collapsed it into a really elegant system.”

One side effect of the moral victory – and instant success – of Ridiculous Fishing is that people to this day still ask Ismail whether he was thankful for Gamenauts’ clone and the whirlwind it wrought. “Absolutely not!” he scoffs. “Sure, we managed to turn it around. But it was one of the worst development experiences of my life. It took seven days of being stuck in a car together with the team to get that spark of excitement back.” And just as Nijman expresses thanks for the road trip that pushed everybody to restart development, he remembers both he and Ismail were concerned that people would believe Vlambeer’s game was the clone. “That terrified us to the point where we wondered if we should just make something else.” Happily, the studio stuck to its guns and reaped the rewards for its courage.