MSV: The Legend of Music 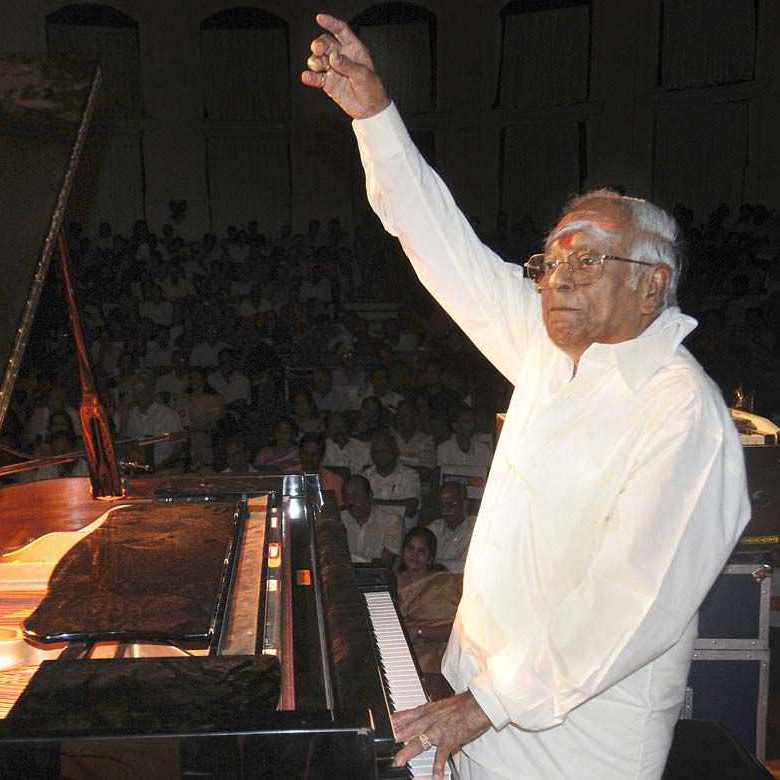 M.S. Viswanathan (1928-2015) and his music have a unique space in the hearts of both connoisseurs and commoners.

This is the story of a self-made musician: Manayangath Subramanian Viswanathan, popularly and fondly known as MSV, who mesmerised Tamil minds with his melodies for close to six decades. He passed away at his residence in Chennai on July 14 at the age of 86.

Born in Elappully near Palakkad in Kerala in 1928, MSV grew up in near poverty after he lost his father when he was four years old. His mother made him the extraordinarily humane but strong human being that he remained all through his life.

One of his disciples, the composer Ganesh of the Shankar-Ganesh duo, said he was more a humanist than a composer. “Music and humanism cannot be separated,” he said.

MSV’s basic schooling in Carnatic music from Neelakanda Bhagavathar for a brief period laid the foundation for his phenomenal career, which spanned more than four decades and thousands of immortal melodies. When he began his career, film music still had a strong Carnatic infuence, with doyens like Adi Narayana Rao, S.M. Subbiah Naidu. G. Ramanathan, S. Dakshinamoorthi and the irresistible K.V. Mahadevan ruling the roost.

But MSV’s genius saw him innovating with ragas, which others refused to do for fear of “polluting” divine music. This break with tradition appealed to the common people and brought for MSV’s brand of music a unique space in their hearts. Rare ragas were taken out of their traditional form of rendition and given a “makeover” that evoked popular appeal and left the purists with nothing serious to complain about.

When this writer met the iconic director K. Balachander (KB) for an interview last year, he shared an interesting facet of MSV. Balachander said he utilized MSV’s expertise whenever he had Carnatic music as the central theme of his scripts. “MSV was the musician for Aboorva Ragangal, and when I expressed my wish that I should have a rare raga for the song “Athisaya raagam”, he used a combination of rare ragas such as Mahathi and Bhairavi. Another song in the film, “Ezhu Swarangalukkul”, has the unique combination of Sindhu Bairavi and Kambhoji, besides a few others.

Asked why he did not use MSV again in his Sindhu Bairavi, he said that the film was about a musician’s life, his rise and fall, where interpretations [of ragas] were not needed. The KB-MSV combination scored songs that defied time, especially in films such as Aval Oru Thodar Kathai and Sollathan Ninaikiraen and, much later, his musical extravaganza Ninaithalae Inikkum, which KB politely termed as a small “kaanikkai” (offering) to MSV and lyricist extraordinaire Kannadasan.

MSV gave his first stage performance at the age of 13 at Kannur and later performed light music on stage in Thiruvananthapuram. The crowd responded cheerfully. Since then MSV maintained his live orchestra troupe which, he once said in Madurai, was his direct connect with his fans.

Despite his busy schedule as a music director—at one time he even had 12 films on hand—he maintained the troupe. He loved the stage and his fans. He loved the garlands and the shawls which his fans showered on him. Like a child, he used to bask in their glorious encomiums. In fact, he sourced a few singers from his troupe.

MSV’s passion for music made him join Jupiter Theaters as a “cleaner” to dust the harmonium of the musician C.R. Subbaraman and later S.M. Subbiah Naidu. From that day to his very end, the harmonium was his alter-ego. “You could never see him in programmers without his harmonium. It was his life. It breathed his breath. It fine-tuned his tunes. Though keyboards ushered in a revolution in light music, he stuck to his faithful box. That tiny, fiery magical box, just imagine, created immortal tunes,” said a musician who worked with him.