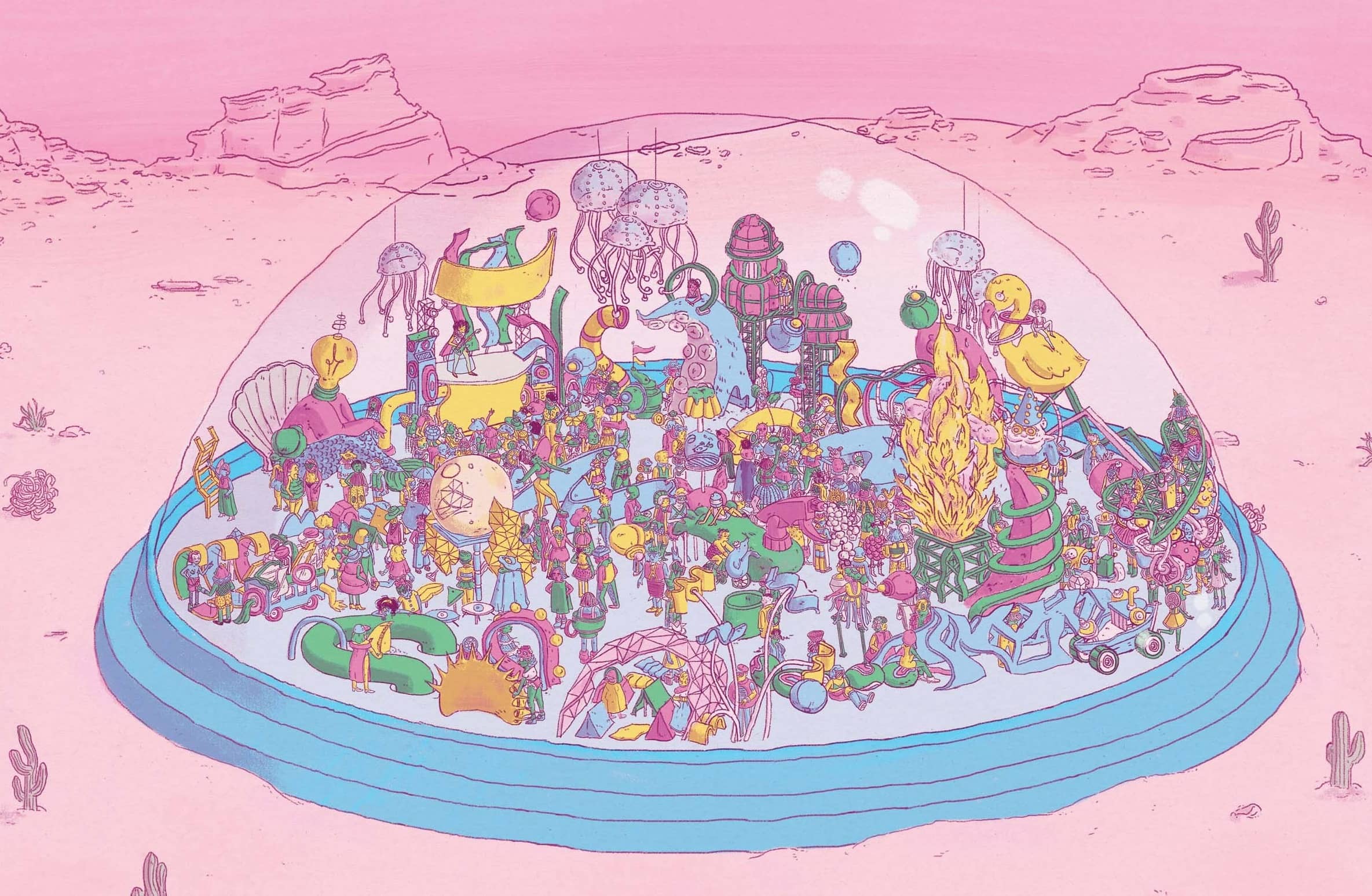 The annual mecca for the experimental and weird has become one of the world’s most iconic arts events by keeping the forces of commercialization at bay. If only it weren’t so Instagrammable.

It was midweek in black rock city Nevada, and the burners were looking disheveled. Days of camping, cooking, exploring, and partying with limited resources on the remote arid terrain where Burning Man is held at the end of August each year had stripped most attendees of any polish they had arrived with.

But one cohort looked suspiciously well preserved. They appeared freshly showered in their carefully selected getups, often some combination of wings, glitter, and exposed midriffs. They looked as though they were heading to a photo shoot—and some of them were, posing for Instagram-worthy desert pics with all the relevant hashtags. While most of the 70,000- plus Burning Man attendees were bunking in RVs and makeshift tents, a growing number of these polished burners had more luxurious digs: all-inclusive camps with air-conditioning, showers, reliable Wi-Fi, and large beds. One boutique-hotel-style fortress, called Camp Humano, featured a selection of “bedouin tents” ($25,000 a week) and two-bedroom lodges ($100,000 a week), along with “personal sherpas” for guests. Humano’s organizers had promoted these accommodations online as “the perfect place to escape from all the madness.”

Over its 33-year history, Burning Man, an eight-day-long experiment in radical, commerce-free living, has drawn a wildly diverse crowd. It’s been home to hippies, artists, and activists; pranksters, ravers, and techno-utopians; punk, grunge, and EDM enthusiasts; libertarians, socialists, and even billionaires. They’ve all embraced—to varying degrees—the 10 principles that founder Larry Harvey laid out in 2004, including selfreliance, self-expression, inclusion, gifting, and decommodification. But during the 2018 event, many longtime denizens of the playa (burner parlance for the Black Rock Desert) found themselves running into a group that even they had trouble assimilating. The influencers had arrived.

Although Burning Man’s organizers avoid the term “festival,” preferring to call it a “catalyst for creative culture,” the event is part of a global boom in culturally focused, cross-disciplinary gatherings that today include everything from Pharrell Williams’s new Something in the Water music and ideas festival and Gwyneth Paltrow’s Goop Wellness Summit to stalwarts like the Frieze art fairs and South by Southwest. Live music events alone are forecast to grow from a $25.6 billion to a $31 billion global industry by 2022. Coachella, for example, drew 125,000 attendees during each of its two weekends in 2017 and took in $116 million, a tenfold increase from 2007, fueled by ticket and merchandise sales, corporate sponsorships, and other brand partnerships. 2018’s Coachella event generated 4 million hashtags, many of them from social media influencers using the festival as a backdrop for a product plug.

Burning Man, which will take place from August 25 to September 2 this year, may bring in more than $45 million annually in revenue, but it has stubbornly defied commercialization, using most of its ticket sales to sponsor community-building activities around the globe and offer artists grants to create large-scale installations for the event. There are no merch tables or food purveyors at Burning Man. Every experience—music, art, and more—is free. According to Burning Man Project CEO Marian Goodell, who has led the 120-employee nonprofit behind the event since 2013, the organization has rebuffed would-be sponsors and acquirers over the years. Burning Man’s remote location and spotty connectivity have made it relatively easy for it to resist the forces of commerce. But the 2018 gathering—the first without founder Larry Harvey, who had passed away a few months prior—was different.

Goodell and other members of the leadership team noticed ruptures in the social fabric of the playa: too many smartphones, those private camps, people seemingly more interested in crossing things off their bucket lists than in joining a community. She and her colleagues had heard about a 70-year-old burner who’d tried to board an art car (the Burning Man equivalent of a parade float mashed up with a party boat) and had been rebuffed for not being “a hot girl.” Goodellherself recalled an encounter with an electronica-blasting art car whose champagne drinking passengers had repeatedly refused to turn down the music during the event’s climactic burning of its namesake “man” statue, a moment that usually inspires at least some reflection among participants. Goodell sensed that one Burning Man contingent was behaving like “it [was] Tulum on New Year’s Eve.”

Worse still was the commerce. At Goodell’s request, employees pulled together a 55-page report documenting it all. There were the concierge-style travel services and so-called plugand-play camps—some seeking profit, others that were simply exclusionary. There was a still-in-beta social-networking app that had been using Burning Man email lists to solicit users. A sculpture from the playa had been licensed to Coach and appeared on a line of sandals. Fashion designer Manish Arora, a longtime burner, showed a collection at Paris Fashion Week that incorporated images and words from Burning Man installations without the artists’ approval. There were photo shoots, product placements, and even some product launches at Black Rock City. “You have people out there [on Instagram] saying what brand of bicycle [they’re riding at Burning Man], what boots they have,” says Goodell. “Why would you do that? You’ve missed the whole point.”