Can The Muppets Take Prime Time? 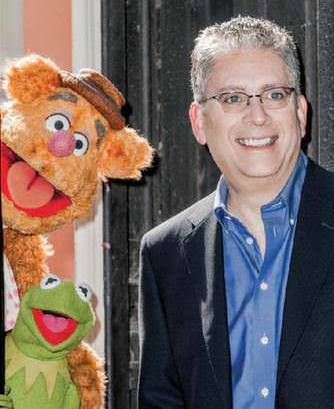 Can the man behind television's biggest sitcom - and his puppet twin - help the muppets take prime time?

It's a few weeks before the new sitcom The Muppets airs on ABC, and Bill Prady, its co-creator and executive producer, is on the set, watching Gonzo rehearse his lines. The show is a behind-the-scenes look at the Muppets’ private life as they produce a late-night talk show, much in the same style as 30 Rock. In today’s scene, Gonzo’s computer crashes. When the IT guy, Chip—a new Muppet—goes to fix it, he discovers that Gonzo has been catfishing women by posing online as the actor Liam Hemsworth.

“Even I know that won’t work, and my entire life consists of two dates with a cashier from Walgreens,” Chip says. Prady frowns. “That’s an unnecessary jab at women who work at Walgreens,” he says. Prady, 55, has a large head, close-cropped hair, and a wide, thin mouth that makes him look a bit like one of the Muppets he’s filming— specifically Chip, who was modeled after Prady.

They reshoot the scene. Dave Goelz, who’s been voicing Gonzo since 1976 and is manning both puppets, tries another joke for Chip: “My entire love life consists of going to the prom with my mother.”

“Sister!” Prady suggests. Goelz tries it. Then aunt. Then grandmother. Sometimes Chip stares at Gonzo with his mouth open and eyes closed. Then Goelz gives him an overbite. He makes Chip snort when he laughs. He keeps trying things, and the scene takes an hour to film. It ends up being largely improvised, which is the way Goelz usually works. In the end, Chip’s dating experience is reduced to “an inappropriately long handshake with a Jehovah’s Witness.” Prady finally laughs.

The Muppets debut on Sept. 22 marks the first time in two decades that Jim Henson’s famous characters—Kermit, Fozzie Bear, Miss Piggy—will star in their own prime-time TV show. It’s been more than 30 years since they did so successfully. Their most famous outing, a comedy-variety act called The Muppet Show, went off the air in 1981. ABC tried to revive the concept with Muppets Tonight in 1996, but it lasted less than one season.

Getting these characters back on TV has been Prady’s white whale. He’s been pushing Walt Disney, which owns the characters, to make a sitcom for years. “The Muppets have long been an afterthought [for Disney],” says James Marsh, a senior research analyst at Piper Jaffray Investment Research, who covers Disney. “They’ve owned the Muppets for a decade, and only now are they trying to monetize that.” Kermit the Frog may be iconic, but at a company that also owns Pixar, Star Wars, and Marvel, he’ll never be a top priority.