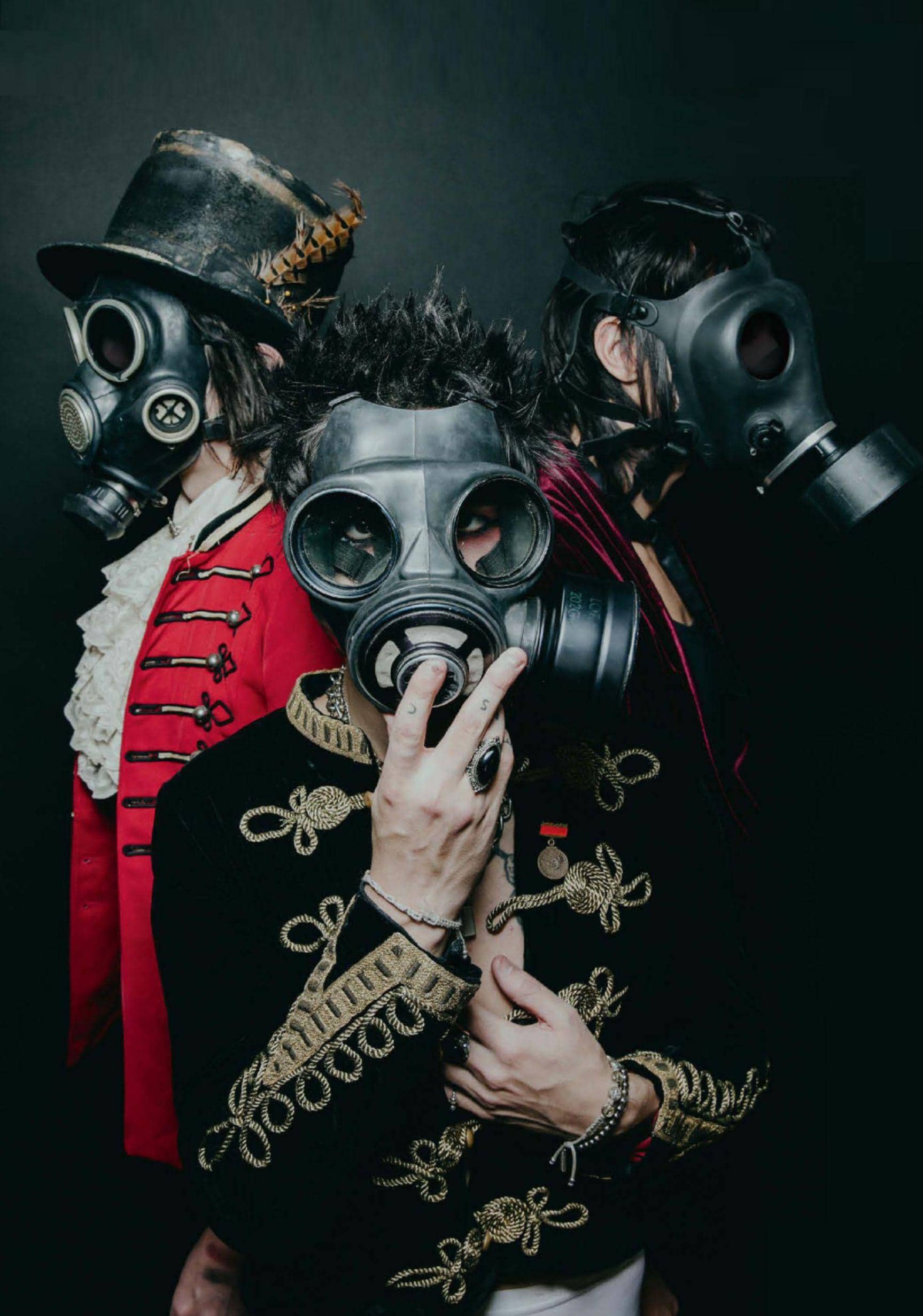 FIST FIGHTS, RUNAWAY SUCCESS AND A STORY THAT’S BEEN UNFOLDING IN PLAIN SIGHT FOR ALMOST A DECADE... THIS IS HOW PALAYE ROYALE MADE THEIR DARING NEW ALBUM ‘THE BASTARDS’, EXCLUSIVELY AND IN THEIR OWN WORDS.

Remington Leith and Sebastian Danzig are beating the living fuck out of each other in a car park.

Over in the UK for Reading & Leeds Festival, and driving from a raucous set at the latter to an even more career-defining slot at the former, Palaye Royale’s vocalist and guitarist have taken it upon themselves to have a wrestle in a motorway service station.

Punches are thrown back and forth, some fucking awful things are said between the two, and when they’re done, they hop back in their van and head to the show.

For the trio, completed by the pair’s younger brother and drummer Emerson Barrett, this has become a regular occurrence.

“I and Remington got back into a van and were like, ‘We can do a van for two shows…’” Sebastian - the elder of the three brothers at 27 - remembers.

“I was completely wrong. We just beat the shit out of each other.

“It started about arguments about music. And then it got personal.”

At the tail end of over 600 shows in the span of four years that’d taken them from homelessness to sold-out shows across the globe, the cover of magazines, and the cusp of stardom, they were, for want of a better phrase, done with it.

“We all used to do everything with each other,” Sebastian explains.

“Now? I got engaged. Remington and Emerson have their things. Your lives kind of separate. We don’t have to live in one room anymore. We have our own places, we’re our own individuals, and trying to come back and make this band an individual band is just not working.”

“I was fucking shit up,” remembers Emerson. “I became insane, I think we all did.”

Tasked with making the follow-up to 2018’s ‘Boom Boom Room (Side B)’ and somehow sustaining a level of growth that’s almost unheard of in any scene, let alone this one, they’ve spent the past 18 months piecing together the most important album they’ll ever make. 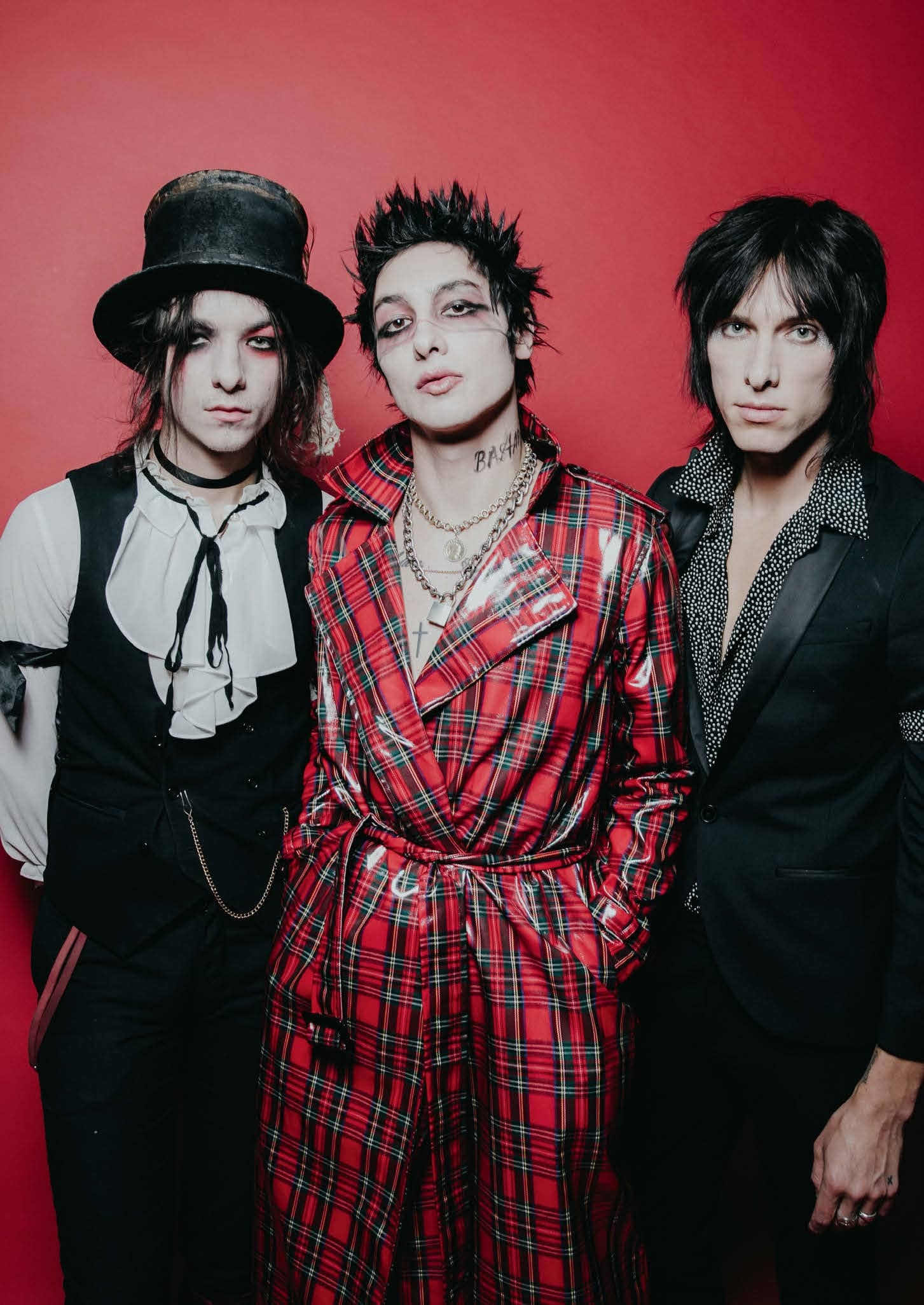 “I’ve been fired like, seven times in the past three months,” chuckles Sebastian.

“I think that’s the nice charm about us, is that we have no filter and you’re getting what you get. Sometimes it really pisses everyone off. But we’re okay with that.” There was a time fairly recently, however, when the three brothers caught themselves wondering if they’d be able to continue as a band and make an album at all. Because, you know, they could have killed each other in the meantime.

“This period almost broke us as a band,” Remington readily admits.

“We don’t agree on anything,” Sebastian shrugs. “It used to be that we all had the same vision, but I think that’s what’s making this [new] record really fucking shine.”

“It’s very unique to a situation like this because we grew up screaming at each other, we grew up fighting. It’s not any different, but the people around us are completely shocked because they’ve never heard people talk like this to each other,” grins Remington. They’re brothers, they fight, they’re intense and creative and headstrong. It’s a reductive comparison, but Remington and Sebastian, in particular, have a slight air of Oasis’ Gallagher brothers about them, all swinging fists and bravado, and combined with Emerson’s creative, destructive brilliance, all of the friction and fallout makes this band fizz.

â€‹“We got into huge arguments, huge fights… we could barely stand the sight of each other,” says Remington. “We were fighting every day, and it got to a dark place. If we had to do another tour right after, I don’t think this band would have made it.

And that, in short, is why we find Remington and Sebastian - siblings, bandmates, business partners… the lot - having an almighty ruck in a Welcome Break. To understand exactly how we got here, mind, we need to travel back two years, to the beginning of November 2017.

Sitting in the dining room of an Airbnb in the plush part of Camden, London, Remington, Sebastian and Emerson spent the day mapping out the next 24 months of their lives to Rock Sound. 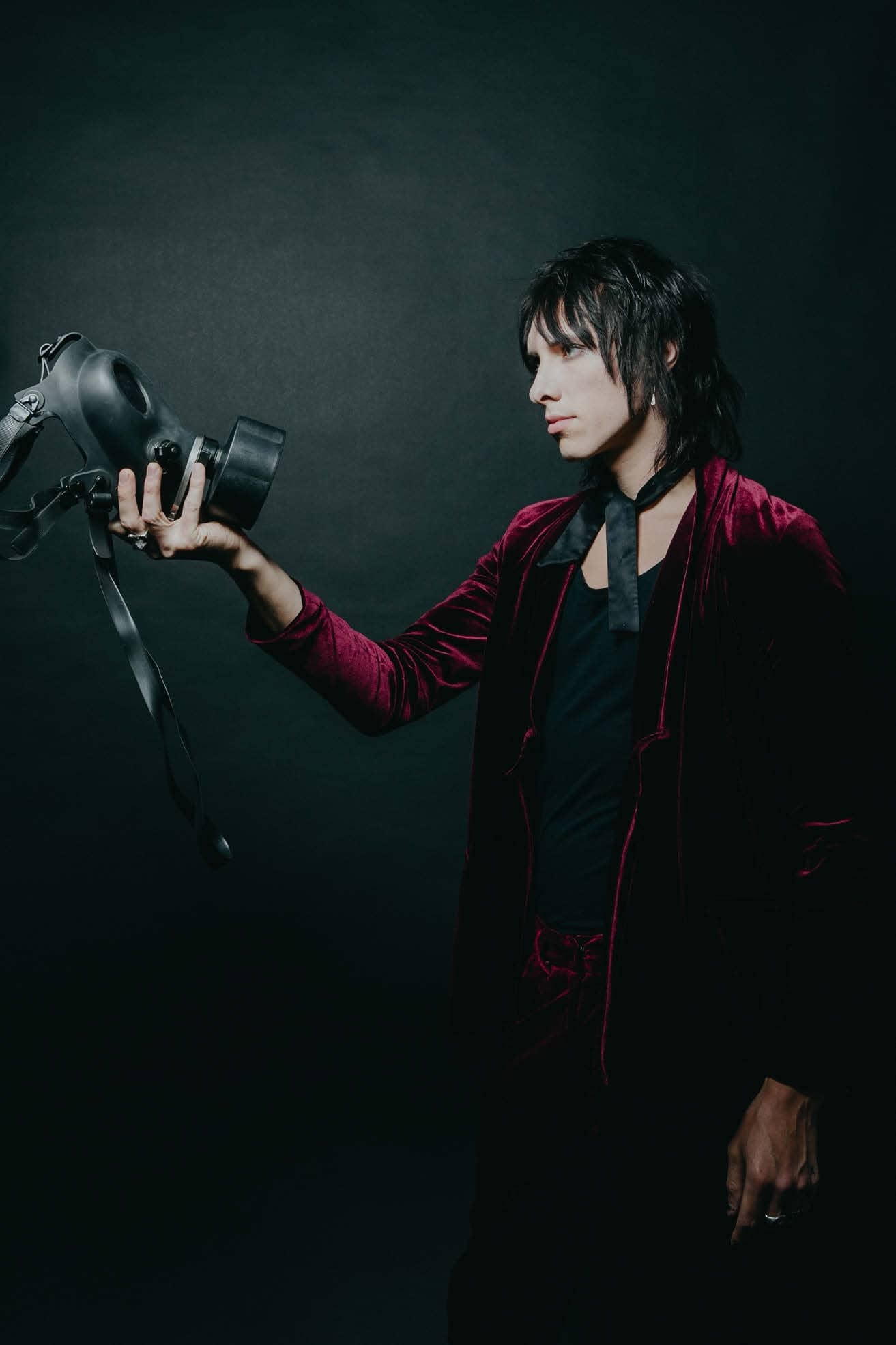 Not too long before that, Remington and Emerson had been living in their mum’s car, a Cadillac Escalade, after being kicked out of their houses, ending up in a flea-bitten motel, scraping quarters together and stealing food from 7-Eleven just to feed themselves. They were beyond excited about the prospect of playing to a sold-out room of 200 people at London’s Camden Assembly that night, their very first show in the UK.

In a couple of months’ time, they’d play to 10 times that number in the same city alone at Shepherd’s Bush Empire.

“What the fuck has happened in that time period?!” nods Sebastian. “We thought we were always going to be the black sheep.

“We’ve been doing something that was so out of date from the beginning, you know, we’re trying to play rock ‘n’ roll. People are just like,

‘What the fuck are you doing?’” What they were doing was blowing people away. Support tours, headliners, festivals… over the past 18months especially it hasn’t seemed to matter where they were and who they were with; Palaye would blow absolutely anybody off the stage.

It was loud, it was unpredictable. It’s rare in 2019 that a band will stand on a stage and their first thought will be, ‘What can we get away with?’, but that’s absolutely true of Palaye Royale. This is supposed to be dangerous and unpredictable and thrilling, and audiences have responded in kind, selling out bigger and bigger rooms, blocking streets and festival stages when the band take part in an impromptu meet and greets, each side clad in distinctive Palaye makeup. It’s… gone well.

“We’re not in our mom’s Escalade any more,” Emerson observes dryly.

“When you kind of start to get what you want, you’re like, ‘Well... I like fucking being an underdog!’” laughs Sebastian.

“I’m living with my fiancée in a house now, and I’m just thinking about three years ago when we were sleeping in a fucking car down the street from here.” The darkness, though, has been building through all of the long drives and overnight flights. Living on top of anyone isn’t easy, even if those people are your literal brothers. It may have worked, but that doesn’t mean it hasn’t hurt them.

“I’m not faking the words I’m saying,” says Remington. “We were living our fucking dreams and this is the only thing I want to do, but it definitely takes a toll on your mental health.” 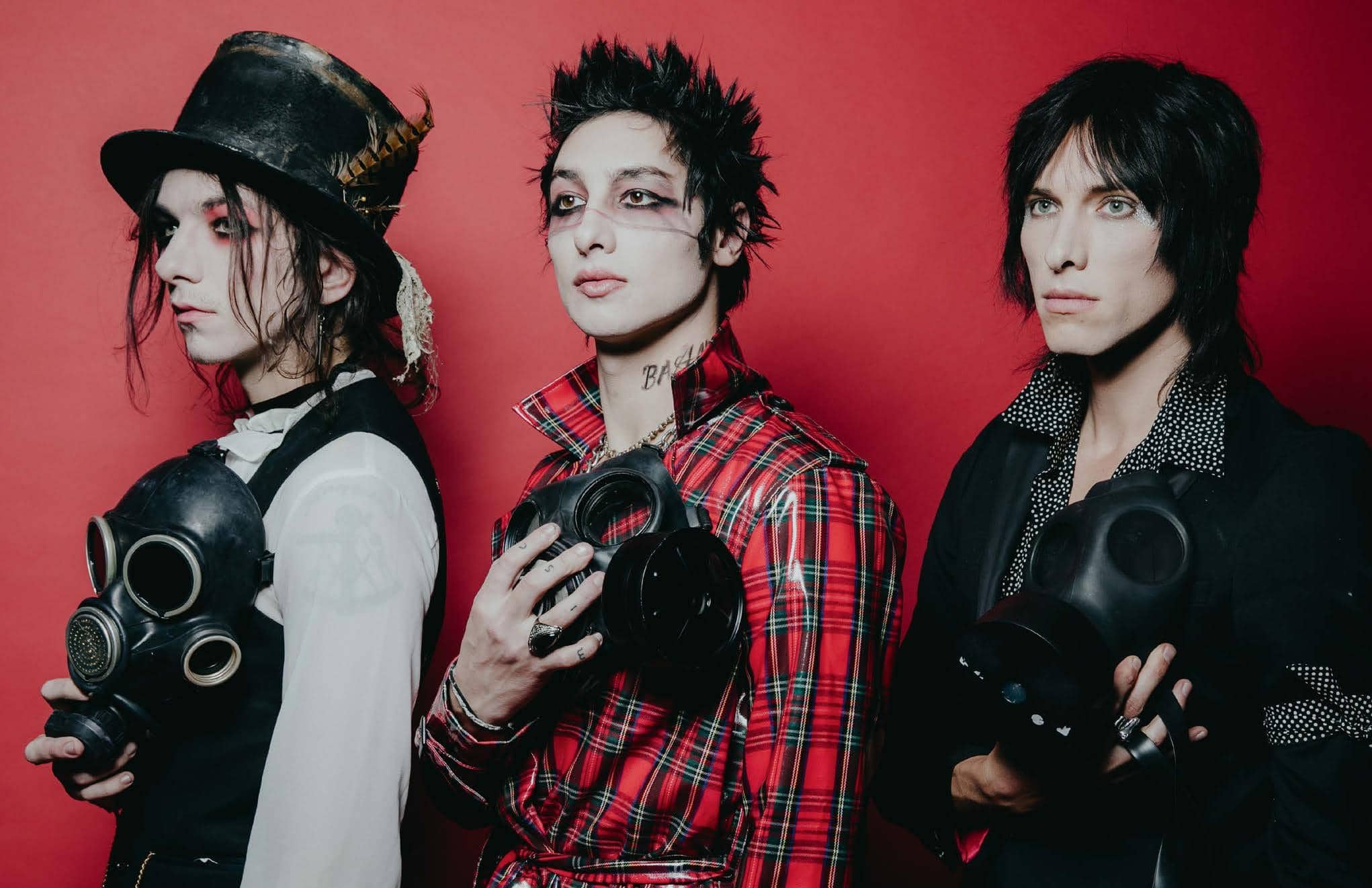 In one of their first-ever interviews with Rock Sound, Remington explained that none of the three brothers could ever leave Palaye Royale.

“If one of us ever tries to leave the band, two of us will beat the shit out of that person until they stay,” he laughed back then.

Two years on, is that still true?

“That’s pretty much what happened…”

The turning point came at the beginning of September. The band finished their gruelling run of touring, and promptly got the fuck away from each other.

But not for long.

“Three or four days go by, and then I called Emerson and I was like, ‘I fucking miss you’. Then I see Sebastian and I’m like, ‘Ah fuck, I miss him’,” Remington smiles. “Before long we’re all back together again. I feel like we got so close that we couldn’t see how much we need each other.”

That can’t live with them couldn’t bear to live without them mentality spread. Fast. And suddenly, they were in the perfect spot to make the album they’ve been threatening to for years. With the optimum mix of tension, fire, and creativity, they set about creating ‘The Bastards’.