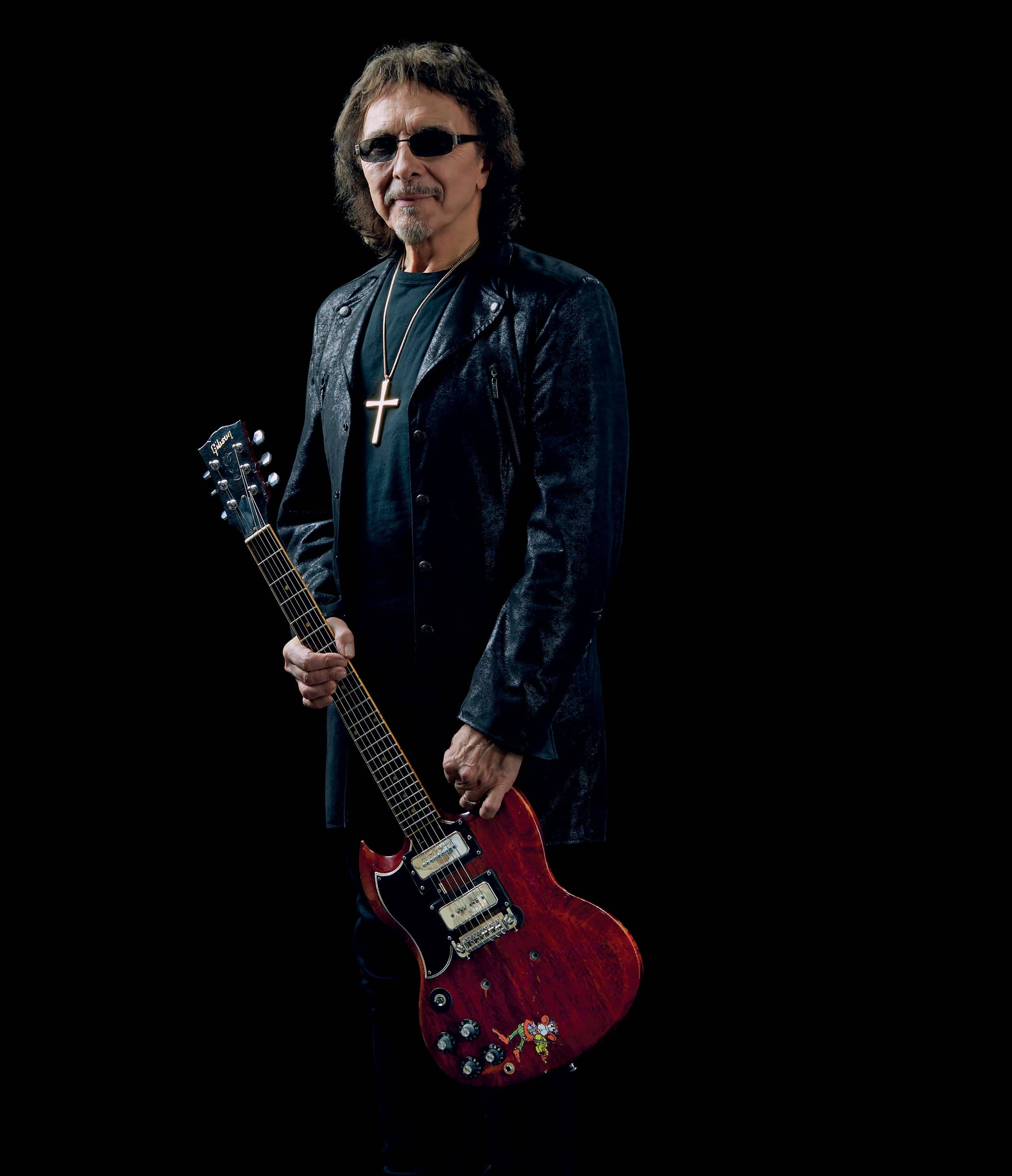 TONY IOMMI takes you inside his new signature guitar, an extremely limited replica of his classic-era BLACK SABBATH axe, a cherry red 1964 Gibson SG Special known as the THE MONKEY. The Godfather of Metal also discusses the horde of new riffs he’s stockpiling, the prospect of new music (with or without BRIAN MAY) — and a recent airport encounter with ROBERT PLANT

TONY IOMMI HAS SPENT THE LAST half-century conjuring the loudest, heaviest, most evil-sounding racket known to man and beast. But even he can still be stunned into silence every now and then. Take, for instance, the moment when the 71-year-old guitarist first laid eyes on his new Gibson model, a note-perfect replica of the cherry red 1964 SG Special (affectionately known as “the Monkey” due to a sticker on its body of a cartoon primate playing a fiddle) that was his primary instrument on the first five Black Sabbath albums — a clutch of records that, together, form something of the ur-text of heavy metal as we know it today.

“This new model is exactly, exactly the same as the original,” he continues. “Right down to every little mark and dent. It’s just incredible.”

Given a guitar as iconic, as heavily modified and, let’s be honest, as weathered as Iommi’s original Monkey, this is no small achievement on Gibson’s part. The company has been responsible for several Iommi signature models over the years, including an impressively appointed Gibson Custom Shop design and an incredibly popular, more affordable Epiphone take. But, Gibson Chief Merchant Officer Cesar Gueikian points out, “We’ve never done the Monkey. And if you think about it, the Monkey is ‘the one.’ ”

Indeed it is. Because while Iommi, metal’s original man in black, might be closely associated these days with the sort of ebony-finished, cross-inlaid SG that Gibson and Epiphone have designed in the past, it is the Monkey that is responsible for the oft-imitated, never-duplicated, heavier-than heavy sound of, for starters, classics like “Paranoid,” “Iron Man” and “War Pigs.” As for subsequent doom-metal masterpieces like “Children of the Grave,” “Sweet Leaf,” “Into the Void” and “Sabbath Bloody Sabbath”? That’s all the Monkey, too. And the guitar in hand for the majority of the band’s glory-days era live shows, including their legendary ’74 California Jam set? You guessed it — the Monkey. In short, if there’s one guitar that is indelible to the sound of Tony Iommi, to the sound of Black Sabbath, to the sound of heavy metal itself, it has to be this very instrument.

“That particular guitar, I lived with it,” Iommi says of the Monkey. “I had it at the side of my bed. I wouldn’t let anybody touch it. It was so precious to me, because we created the sound together.”

Now Gibson has recreated the guitar behind that revolutionary sound in a very limited run of just 25 lefthanded and 25 righthanded examples, each signed and numbered by Iommi himself.

“The original Monkey is now in the Hard Rock Cafe, so they sent it back to us and we did all the scanning and photographing required to create the archive to then do the reissue,” explains Gueikian. Which is no small feat, given that the Monkey is a one-of-a-kind guitar with unique modifications and marks, among them customized pickups, a zero fret and two distinct holes in the body from where the tailpiece was removed. There’s also the detail of the fingerboard, which Iommi coated in poly lacquer in order to make it easier for him to move his thimble-covered middle and ring fingers (as a teenager he lost the tips of these digits in a mishap at a sheet metal factory) up and down the neck. “I had to be able to slide over the frets easier,” he says.

All of these idiosyncrasies are expertly replicated, with “every check, ding, hole, aged piece, everything in the right place,” Gueikian says about the new guitar.

The result is a new Monkey that, in Iommi’s estimation, is not merely just like the original. Rather, he says, “to me this is the original. I don’t miss the original one because this is exactly the same guitar.”

In an exclusive interview with Guitar World, Iommi sat down to discuss the origins of the Monkey and the process of creating the new limited-edition reissue. While we had him in the hot seat, we also took the opportunity to inquire about current goings-on in his musical universe, from the possibility of new music, to what he discussed at his recent airport runin with Robert Plant, to his long-standing relationship with another British rock golden god, Brian May.

One thing he did tell us with certainty: Whatever the future holds, we’ll all be hearing from Iommi and his Monkey again, and sooner rather than later.

You’ve worked with Gibson on signature models in the past. It took a long time, but how did the idea to reproduce the Monkey first come up?

The idea actually came up years ago. Of course, it didn’t materialize until more recently, since Cesar [Gueikian] got involved, which has changed Gibson completely. They are so on-the-case now, absolutely brilliant. But yes, we had done a couple of guitars over the years — the Custom one a few years ago, and then it went to Epiphone and we did those. But it just seemed like the right thing to do to reproduce the Monkey, because that’s the guitar you hear on the first five Sabbath albums.

The story behind how the Monkey became your primary instrument is one of almost blind luck. You had been using a Stratocaster in the studio to record the first Black Sabbath record, and when the pickup in that guitar failed, you grabbed the other one at your disposal — the SG Special.