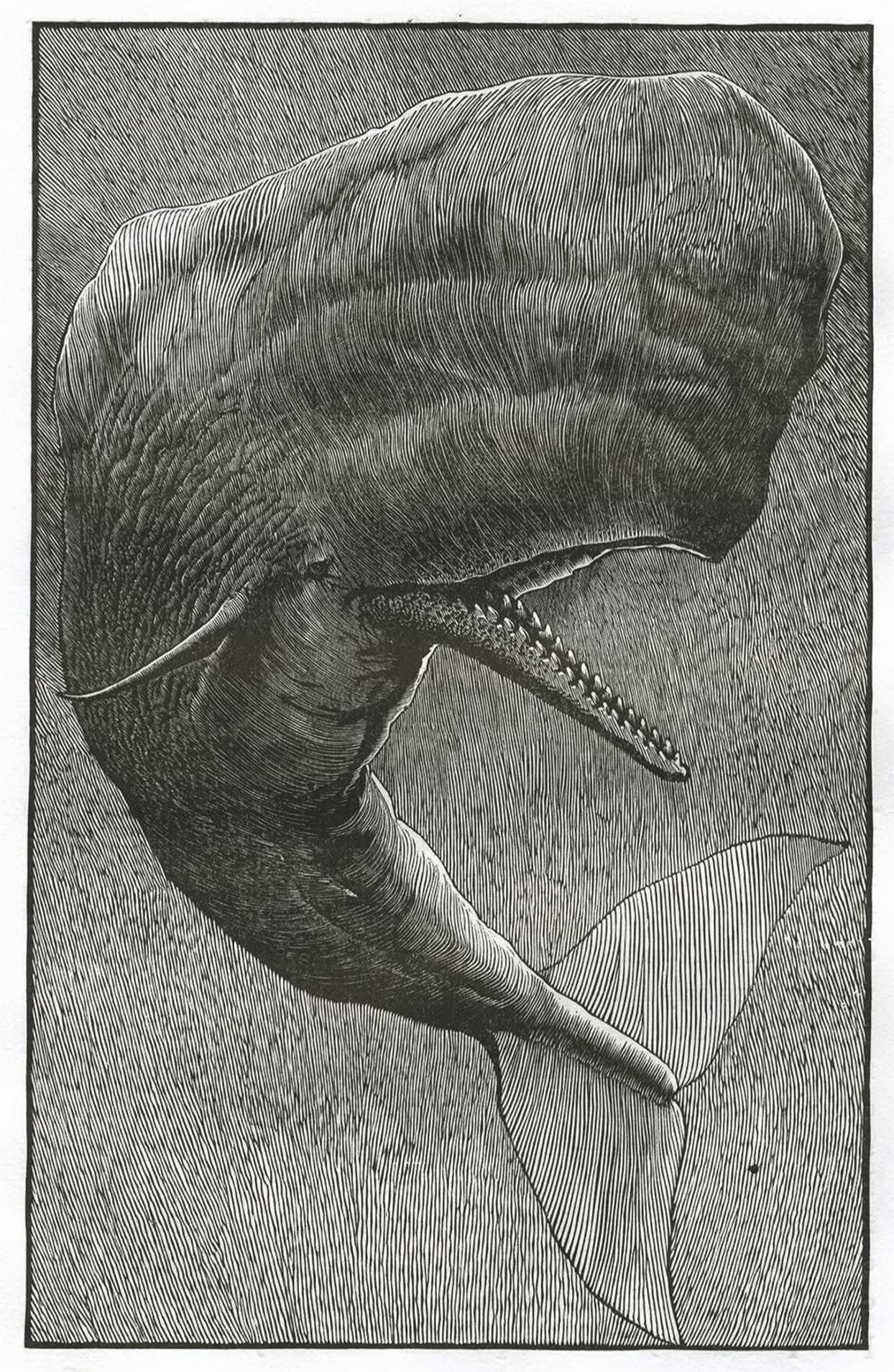 Sperm whales are extraordinarily intelligent animals with deep family traditions and the ability to communicate across oceans with sonic clicks. But when Rowan Jacobsen had a close encounter with one in the Caribbean, he saw a creature far stranger than he’d ever imagined.

THREE MILES OFF THE COAST OF DOMINICA, ON A FLAT BLUE CARIBBEAN SEA, PERNELL FRANCIS LOWERS A HYDROPHONE INTO THE WATER AND SLIDES A PAIR OF HEADPHONES OVER HIS EARS. CAPTAIN JERRY KILLS THE ENGINES ON THE SOUTHERN CROSS, HIS SPORTFISHING BOAT, AND THE OTHER TWO PEOPLE ON BOARD, THE MARINE SCIENTIST GAELIN ROSENWAKS AND HER MOTHER, STACY, ET SUPERSTITIOUSLY QUIET.

It’s eight o’clock in the morning on November 21, and we’re listening for the sounds of the world’s brainiest and most charismatic megafauna.

Dominica is one of the best places in the world to interact with sperm whales, and each year the government grants a handful of permits that allow scientists and photographers to get in the water with them. Gaelin’s permit is for Visual Assessment of Potential Stressors on Physeter macrocephalus. Her goal is to produce a photographic record of Dominica’s whales, looking for signs of injury incurred from things like ships and fishing gear. She’s also hoping to make a film about our species’ complicated relationship with sperm whales. Pernell, a local Dominican who’s been called the whale whisperer for his uncanny ability to find them, is our guide.

Sperm whales communicate across miles of ocean using a complex language of sonic clicks. By listening to the hydrophone, Pernell can tell if they are near or far, diving or surfacing, feeding or cruising. He rotates the pole, pointing the device in every direction, face tight with concentration.

Behind Pernell, Dominica looms. A precipitative pile of rainforest, with countless waterfalls cascading down its 4,000-foot flanks, it has almost no natural harbors, very little nautical traffic, and deep underwater canyons teeming with large squid. It’s an ideal place for sperm whales.

But they don’t always show. Just ask Gaelin, who is standing beside me with crossed fingers and is whispering whales, whales, whales. At more than $3,000 a day for the boat, guide, and other appurtenances, the project is a major gamble. To raise the full funding for the film, she needs some killer footage, and for that she needs whales. In 2018, she secured a permit, hired Pernell, and got skunked—five days on the water, a whole lot of silence in the hydrophones. The island’s parting gift was a flash flood at the airport that nearly swept Gaelin, Stacy, and their camera cases out to sea. Now she’s back for one more try. 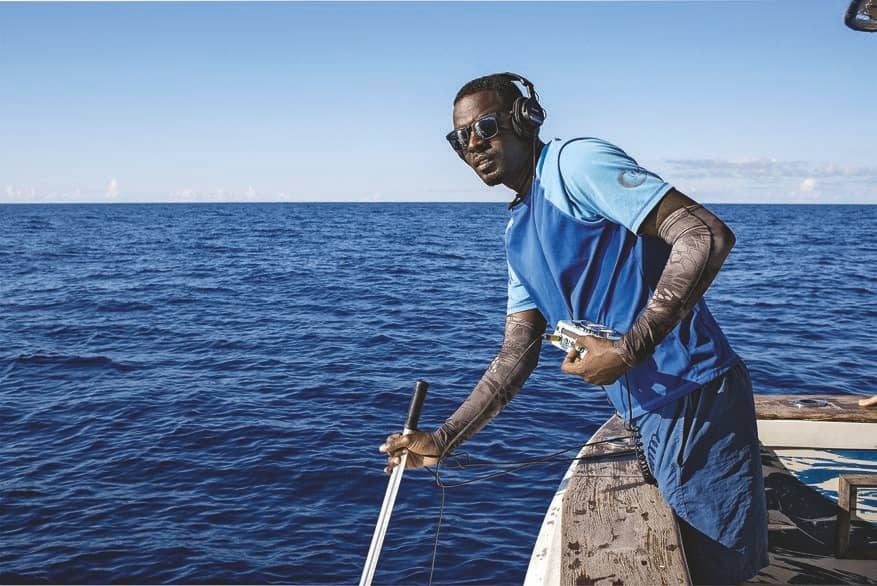 But as Pernell pulls off his headphones, the early verdict is not encouraging. “It’s quiet,” he says. “Nothing within three miles. We gotta keep going.”

I feel Gaelin deflate a little. Trained in coastal environmental management, she now describes herself as both a scientist and a storyteller. She tagged Atlantic bluefin tuna in graduate school, but after watching her research subjects slide toward extinction, with the population declining some 75 percent between 1957 and 2007, she shifted to advocacy. In 2008, she founded Global Ocean Exploration, which organizes research expeditions and documents the work of scientists through photography and video. More than a decade later, she has partnered with scientists in the Arctic, Antarctic, and many places in between. “It’s about bringing back stories of expeditions that people can relate to,” she says, “as opposed to just writing scientific papers.” Recent trips have taken her to Palau, to make a short film about climate-resilient corals, and to the bottom of Belize’s Blue Hole with Richard Branson and Fabien Cousteau, a grandson of Jacques. 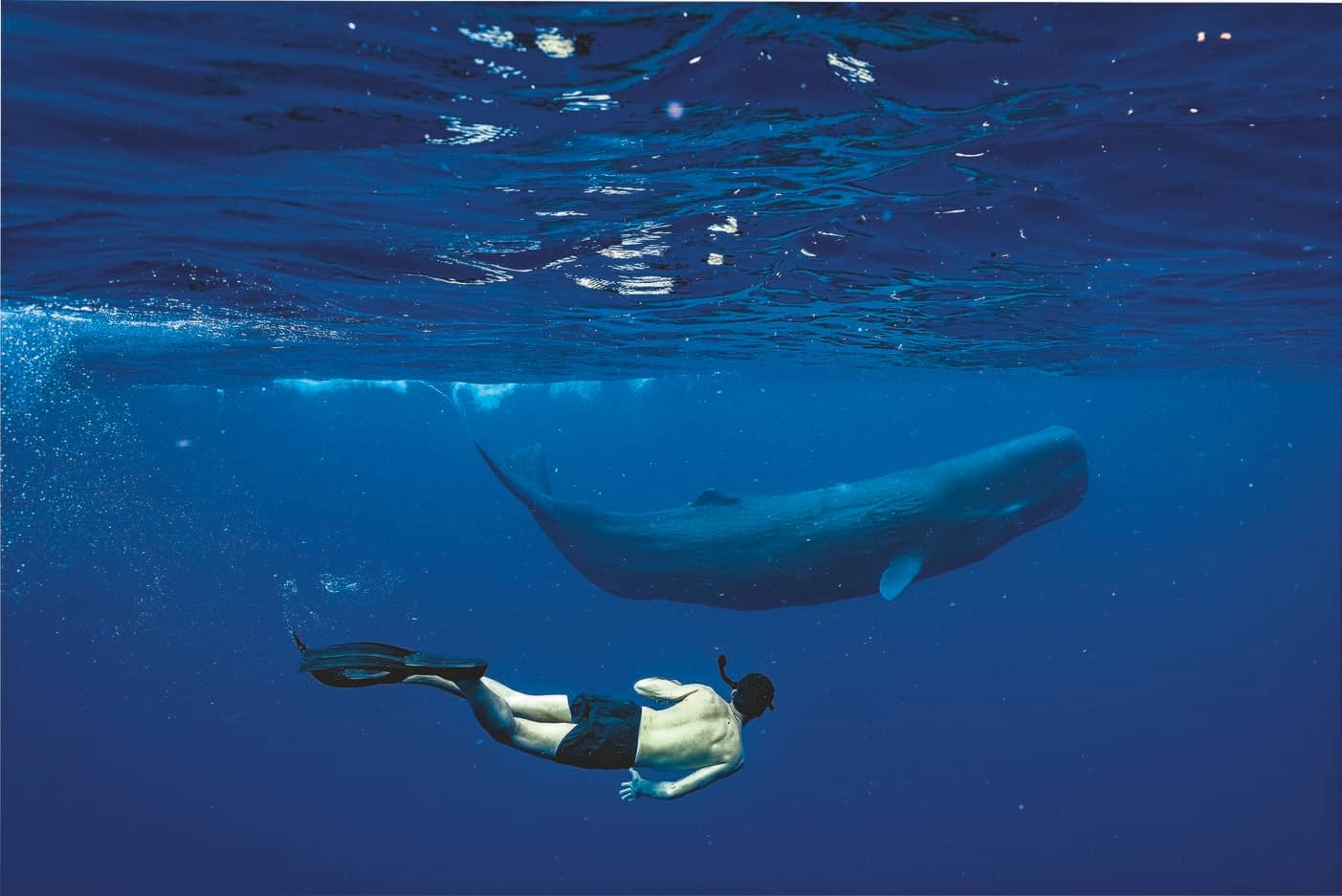 THE WHALE DOES NOT LOVE YOU. AT BEST, IT’S LOOKING FOR A LITTLE ENTERTAINMENT ON AN OTHERWISE HUMDRUM DAY. AT WORST, IT WISHES YOU WOULD GO AWAY.

Gaelin’s film concept is inspired by a close encounter she had with a sperm whale as a child, which helped set her life’s course. Physty (pronounced “feisty,” a play on Physeter macrocephalus) was a young sperm whale that tried to beach himself on Coney Island in 1981. Sick with a mystery illness and being battered by waves, Physty was towed to a nearby boat basin for rehab.

At the time, well over a thousand sperm whales were still being killed by humans each year, and Physty made their plight personal. Floating on his side in the basin, weak and disoriented, he became a national sensation. Thousands of people traveled to the harbor to root for his recovery.

Among them was Stacy Rosenwaks and her young son and daughter. “We went every other day to watch the vets take care of him,” Stacy says. “We were right there next to him. You could smell his breath, see his spray.”

“I remember being so close and seeing his eye,” says Gaelin. “I wasn’t quite two years old yet, but that moment of interaction was really powerful.”

As Physty neared death, the vets swabbed his blowhole and determined that he had pneumonia. A Navy veteran named Michael Sandlofer spent days in the water with the whale, gently touching him to gain his confidence, and was finally able to get Physty to take an antibiotics-laced squid from his hand. Then another. And another. Within days, Physty had improved enough to be released into the sea, escorted by a flotilla organized by the National Marine Fisheries Service. It was the first time a sperm whale had ever survived captivity, and it energized the growing Save the Whales movement. The following year, the International Whaling Commission passed its historic moratorium on commercial whaling. 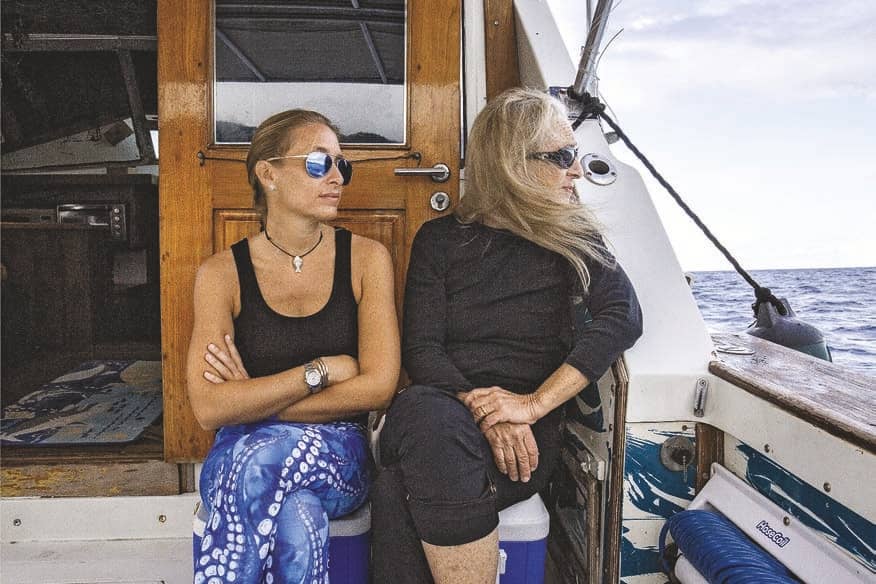 The author with a young whale; Pernell Francis listening for whales; Gaelin and Stacy Rosenwaks

Physty also energized Gaelin, who moved her toys into the family sauna, which had a porthole window. She called it her submarine and pretended she was exploring the ocean. Gaelin’s been at it pretty much ever since, though the toys have grown considerably more expensive and the subs are now real. 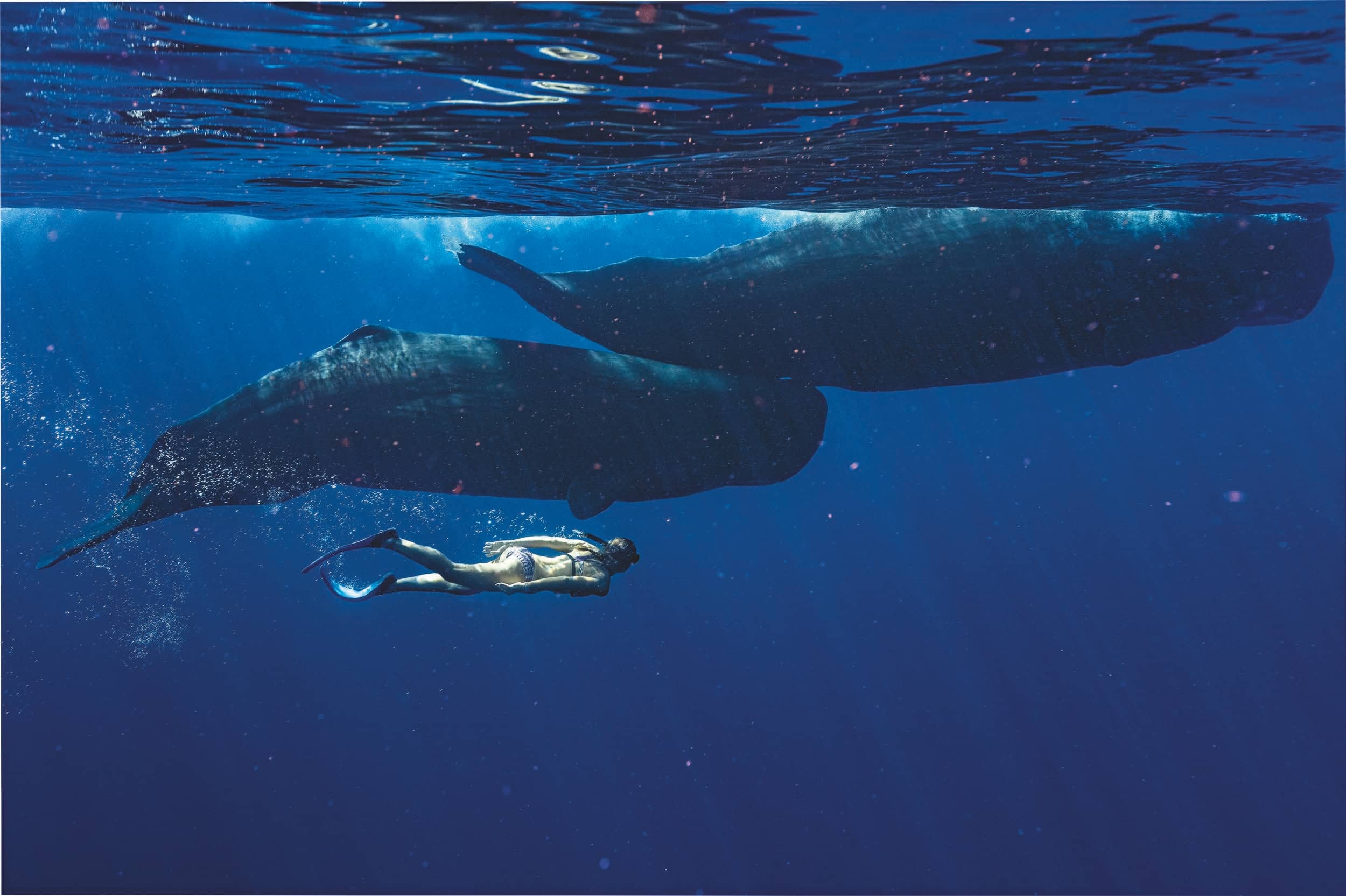 Gaelin with a mother and child sperm whale

I’M DOUBLE-CHECKING THAT THE GOPRO IS RECORDING WHEN I LOOK AHEAD AND, GOOD GOD, 15 TONS OF GARGANTUAN WEIRDNESS IS COMING AT ME WITH PURPOSE.

Though Physty may have initiated Gaelin’s affair with the ocean, Gaelingives her mother most of the credit for where she’s ended up. “She played a huge role,” Gaelin says. “She taught me to fish and to pull a seine net. We’d dissect the catch together.” They remain tight, fishing the rips out of Montauk in conditions that would turn a fair-weather angler green. At 67, Stacy’s still strong in the water, and offers a seasoned pair of hands to steer a boat or hold a camera. In a few days, the cinematographer Stephani Gordon will arrive to shoot more footage for the film project, but for now the video work is up to Stacy and Gaelin, and I’m doing my best to capture some behind-the scenes material.

I’d met Gaelin several months earlier, at an ocean-plastics summit. She was a skilled freediver with a deep understanding of marine science and a profound respect for aquatic species great and small. We kept in touch, and she soon mentioned her upcoming trip to document sperm whales and asked if I wanted to come.