We realize we’re at the wrong entrance when a police cruiser pulls up behind our car. An officer steps out with one hand on his sidearm, eyes locked on me, as I approach a guard posted in front of the Central Intelligence Agency’s hyper-secure headquarters in Langley, Virginia. My photographer, Ferdous “Danny” Al-Faruque, stays in the car, hands in plain view to avoid spooking the spooks. Thus begins our bizarre descent into the CIA rabbit hole, not to unearth classified documents on torture at Guantánamo Bay or UFO warehousing at Area 51 but to sneak a peek at the controversial million-dollar-plus art collection hanging inside—a collection that has grabbed headlines of late not only because few outsiders have laid eyes on it but also because for years the CIA seemingly didn’t want anyone to know its contents.

Unbeknownst to many, the CIA established its own arts commission in 1963 for purposes that vary from “the selection of the colors of paint for the walls” to “the development, location and display of exhibits.” The agency website briefly mentions a collection of abstract paintings that “represent an elemental approach to art, a swashbuckling donor and a connection to the architecture of the [original headquarters building].” This collection is separate from the CIA’s highly publicized museum of intelligence-themed artwork and historical artifacts such as clothing, weapons and radio equipment. According to the site, the paintings arrived by way of an eccentric collector named Vincent Melzac, who by the time he died in 1989 had become notorious in D.C. for his hotheadedness.

It wasn’t until around 2015 that public interest in the Melzac collection caught fire, after the CIA denied several Freedom of Information Act requests about it from a Portland, Oregon– based artist named Johanna “Joby” Barron. In a 2015 appeal, Barron threatened the agency with a lawsuit, stating, “Should you continue to deny my request in whole or in part, and if you do not provide a satisfactory explanation of any withheld or excerpted materials, I may take legal action to compel disclosure under the FOIA.” 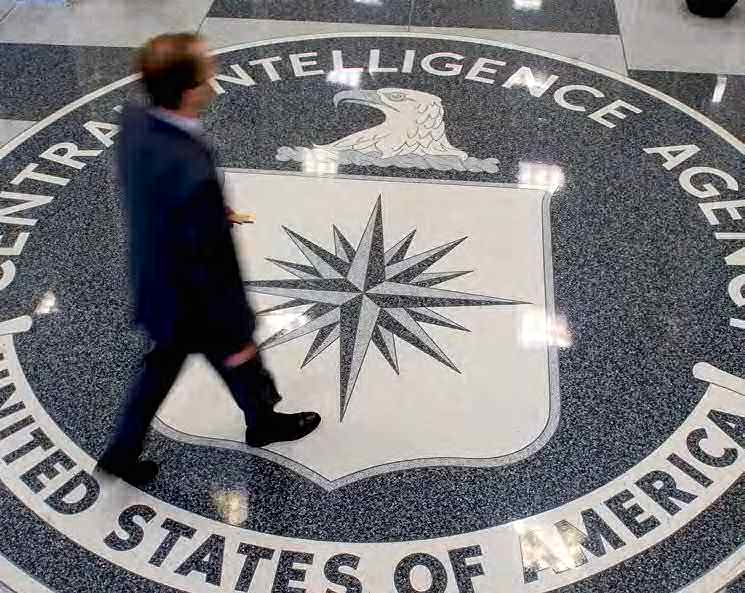 Details about the collection—specifically the artists and works on display—have since vaporized into myth, both controversial and misrepresented. In December 2015, art website Hyperallergic noted, “Unless you’re one of the CIA’s undisclosed number of employees, your chances of ever seeing these paintings, or even digital images of them, are pretty slim.” In February 2016 CNN reported, “The identities of many of the artworks remain unknown.”

The CIA’s repeated dismissals of Barron’s FOIA requests underscore the collection’s purported secrecy, though some of the works can be seen in artist Taryn Simon’s 2007 collection An American Index of the Hidden and Unfamiliar. Other pieces appear briefly in Argo, the 2013 best picture Oscar winner, some of which was shot on location at Langley. But it wasn’t until producers at Warner Bros. tried to secure image rights that one of the artists, Robert Newmann, learned that a painting of his hangs in CIA headquarters. “I’m not exactly thrilled my painting is there,” says Newmann. “I would never have approved it, nor do I think any of the other artists would have.”

Talking with Newmann on the phone after my visit to Langley, I tell him the CIA had said none of the artists were still alive. When Warner Bros. contacted Newmann in 2012, the studio told him that the CIA said it hadn’t been able to find him. “I’ve been living in New York for 35 years in the same loft,” he says. “It’s a sad comment that Warner Bros. could find me but the CIA couldn’t.”

Unraveling the mysteries surrounding the collection is why Danny and I are at Langley, but first, we have to get inside. Clearance heretofore has been tense, the culmination of dozens of phone calls and e-mails and several security checks over more than a month. After sending a blind e-mail through the CIA website, I received a response from a woman named Molly Hale saying she’d forward my request to the appropriate party. The website notes that Hale has worked at the agency since 2002, is the “public voice of the CIA” and “reads more than 13,000 e-mails, answers 3,000 phone calls, reads 900 faxes and sends out several hundred letters” in a given month. A simple Google search for “Molly Hale,” however, raises questions about her existence.

Lo and behold, I received a call back from CIA spokesperson Glenn Miller. I’d sensed from media reports that it would be impossible to view the artwork in person, but Miller agreed to let Danny and me in. And so we’re finally here, albeit drawing way too much attention to ourselves.