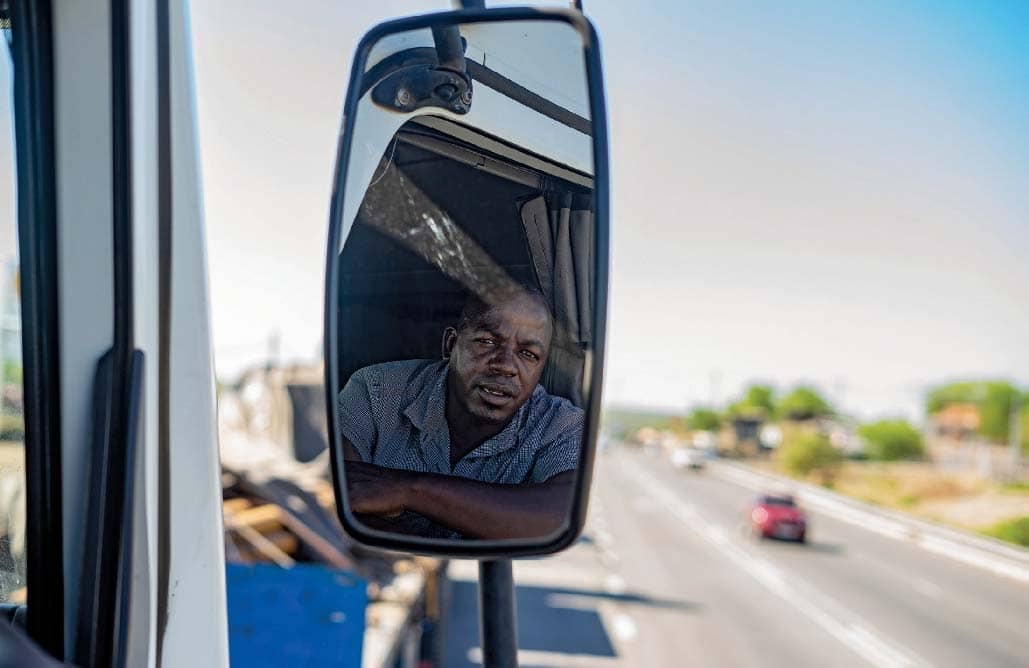 Nyoni Nsukuzimbi drives his 40-ton Freightliner for just over half a day from Johannesburg to the Beitbridge border post with Zimbabwe.
Antony Sguazzin, Prinesha Naidoo, And Brian Latham

At the border post—little more than a gas station and a KFC—he sits in a line for two to three days, in temperatures reaching 104F, waiting for his documents to be processed.

That’s only the start of a journey Nsukuzimbi makes maybe twice a month. Driving 550 miles farther north gets him to the Chirundu border post on the Zambian frontier. There, starting at a bridge across the Zambezi River, trucks snake back miles into the bush. “There’s no water, there’s no toilets, there are lions,” says the 40-year-old Zimbabwean. He leans out of the Freightliner’s cab over the hot asphalt, wearing a white T-shirt and a weary expression. “It’s terrible.”

By the time he gets his load of tiny plastic beads—the kind used in many manufacturing processes—to a factory on the outskirts of Zambia’s capital, Lusaka, he’s been on the road for as many as 10 days to traverse just 1,000 miles. Nsukuzimbi’s trials are typical of truck drivers across Africa, where border bureaucracy, corrupt officials seeking bribes, and a myriad of regulations that vary from country to country have stymied attempts to boost intra-African trade.

The continent’s leaders say they’re acting to change all that. Fifty-three of its 54 nations have signed up to join the African Continental Free Trade Area; only Eritrea, which rivals North Korea in its isolation from the outside world, hasn’t. The African Union-led agreement is designed to establish the world’s biggest free-trade zone by area, encompassing a combined economy of $2.5 trillion and a market of 1.2 billion people. Agreed in May 2019, the pact is meant to take effect in July and be fully operational by 2030. “The AfCFTA,” South African President Cyril Ramaphosa said in his Oct. 7 weekly letter to the nation, “will be a game-changer, both for South Africa and the rest of the continent.”

It has to be if African economies are ever going to achieve their potential. Africa lags behind other regions in terms of internal trade, with intracontinental commerce accounting for only 15% of total trade, compared with 58% in Asia and more than 70% in Europe. As a result, supermarket shelves in cities such as Luanda, Angola, and Abidjan, Ivory Coast, are lined with goods imported from the countries that once colonized them, Portugal and France.