The B-26 Invader has been kitted in this scale before, with Revell Monogram kit being the most recognisable, complete with raised panel lines. Recent re-boxes from Revell make this kit easy to obtain than the Must Have Models kit in the same scale. That kit is well regarded, being first released in the early 1990’s it has raised panel lines but a good level of detail elsewhere. Now, some twenty-five years later, ICM have brought us all-new up-to-the-minute tooled versions of the Invader family to the modelling world. Their first release of the B-26 B-50 is the focus of attention during this build, and the hefty box was collected from the Editor at Scale Model World in November.

First impressions were good, with a nicely rendered digital picture on the box top, lifting the lid showed the valuable contents secured inside. The seven mid-grey coloured sprues were sealed in plastic bags for protection, but some of the parts had become detached from the runners and floated free inside the bag, so be careful when opening the bags to prevent the loss of any parts. The plastic felt a little slippery when handled, and a little soft but the detail, the majority of which is engraved, is fine. Where appropriate on the airframe, raised detail exists and adds to the overall good impression of the large fuselage and wing sections. The clear parts are contained on a smaller sprue and contain the usual lights and lenses plus two canopy sections, along with the glazing for the gun operator’s position.

A twenty-four-page instruction booklet accompanies the plastic parts and sees assembly concluded in one-hundred stages. The assembly is laid out in easy to understand exploded view diagrams with colour call outs referring to the table provided on the front cover for Tamiya and Revell paints. 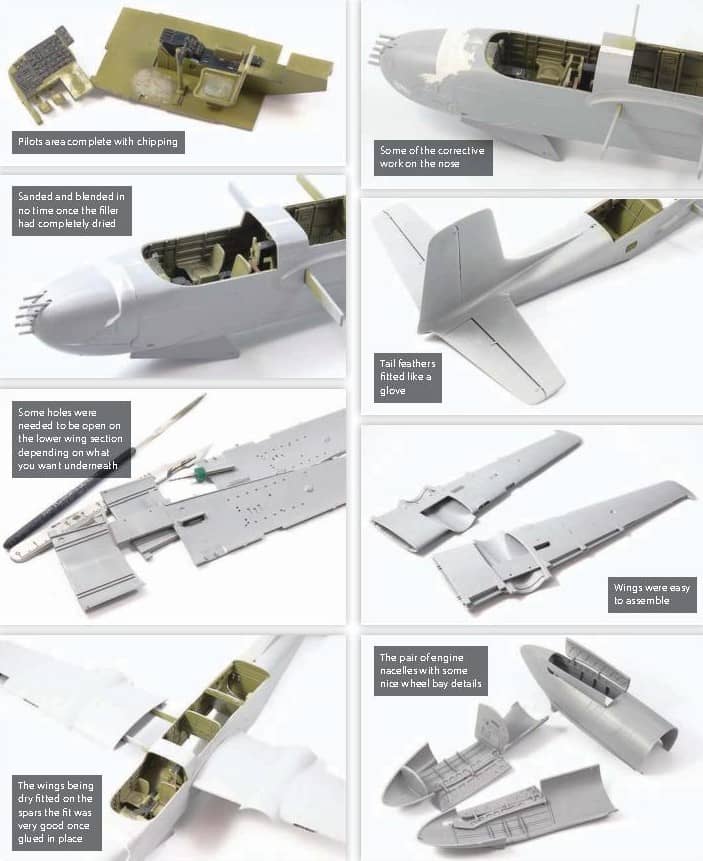 All the parts were first washed at the kitchen sink to remove the greasy feel to the parts when first removed from the plastic bags. This is probably down to the use of a mould release agent and is best washed off as it could affect the painting process later in the build. With the parts, left to air-dry on the draining board, work commenced a few hours later with the construction of the pilot’s seat. This in turn was added to the cockpit floor along with the centre consoles. Detail is ok for the scale but could be better as quite a lot will be visible through the cockpit glass. The control column and instrument panel were built up before being added to the cockpit floor section. The rear cockpit bulkhead is adequate, but the detail could have been portrayed a little better than what is moulded in place. More structural racks and cross beams were then added to the central cockpit floor section along with the radio equipment.

All the pre-assembled cockpit parts were primed with A.K. grey primer before receiving a layer of U.S. Interior green. The Cockpit floor had chipping added with a sponge and silver paint, to add a little wear and tear around the pilot’s feet. Detail painting was conducted by brush in black, before the individual switches and dials were depicted in various colours to add visual interest. The instrument panel details are provided on a decal. Unfortunately, this broke up into the separate dials on contact with water rendering them near impossible to fish out and locate on the instrument bezels.

Further construction focuses on the addition of internal items to both fuselage sides, and construction of the wing spars that will ultimately make for a strong wing-to-fuselage joint later in the build. Detail is very good, and a good representation of the inner fuselage resulted easily, with a good positive fit of the parts in their key locations making life a lot easier along the way.

The bomb bay is well rendered as well with four bombs provided to furnish the racks attached to the fuselage sides. A single part provided in the kit means closing the bay doors is straight forward if you don’t want to show them open.

The wheel wheels have their doors moulded in with the sidewall detail, making it a challenge if you wanted to depict the model in flight, but means no tricky alignment issues will arise trying to attach them later.

Painting the internals was next in the build sequence, before the fuselage sections could be joined together.

U.S. Interior Green was applied over a base coat of A.K. Interactive Grey Filler primer. Once dry, dry-brushing with a light shade of grey brought out the raised details and started to bring the area to life.

Flory Models Dark Dirt Wash was used to add a sense of depth and shadow, before sealing everything in with a matt varnish to conclude work in the area. Dry fitting of the internal structures meant that there were no fit issues when the fuselage sections were brought together in stage nineteen, in fact the fit was very good. Tamiya Extra Thin cement was run along the joints, while sections of Tamiya masking tape held them in alignment until the glue had dried.