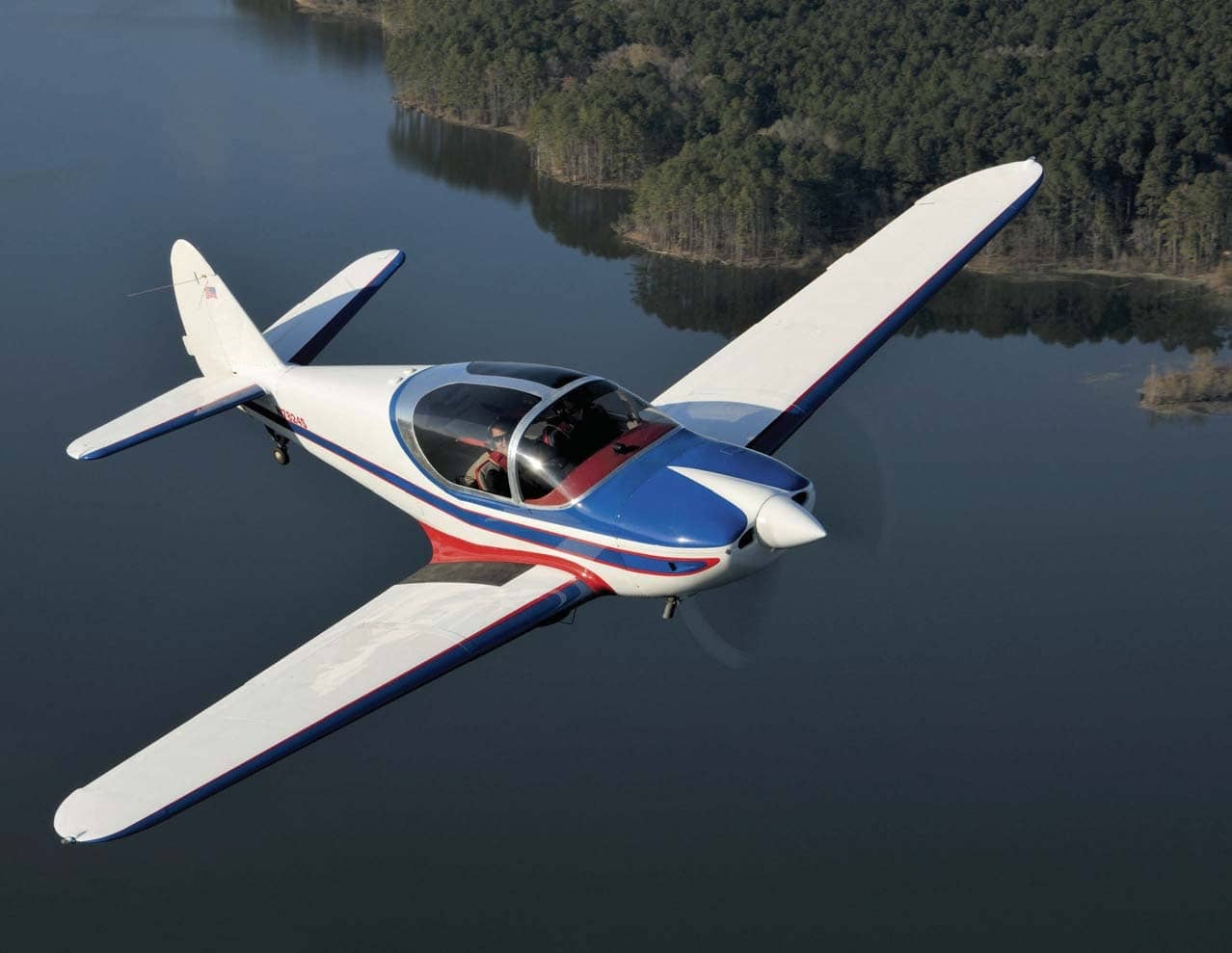 It has an unfortunate reputation but it’s fast, aerobatic and looks like a fighter. It’s time to reconsider the Globe Swift

The Globe Swift has, over the years, earned something of an unfortunate reputation. It has become one of a small but unique club of ‘don’t go near them’ aircraft. It is reputed to be one of the easiest of aircraft to ground-loop, while exhibiting a vicious stall and wing-drop, a sink rate like the proverbial rock and an appalling takeoff performance. That said, I wonder how much of this criticism has been generated by armchair pilots, and in particular whether the complaints are only justified against the early GC-1A and GC-1B versions, which came with just 85hp and 125hp respectively.

Sitting in the air-conditioned offices of Elite Aircraft, at the pleasant if somewhat grandiosely named Raleigh Executive Jetport near Sanford in North Carolina, I am awaiting the arrival of a lovely Globe ‘Super Swift’. Outside, it is a typical North Carolina spring day; clear blue skies and temperatures already climbing into the eighties (Fahrenheit, of course). It is not often I question myself but today I’m thinking am I about to do the right thing? After all, what can possibly go wrong?

When it arrives on the ramp, having made the short journey on the taxiway from another hangar of the airfield, I am a little confused. It has often been said that ‘if it looks right, it will fly right’. Here, there is absolutely no debate: parked on the ramp, the Super Swift is a beautiful looking aircraft. Therefore, it should fly right, shouldn’t it? 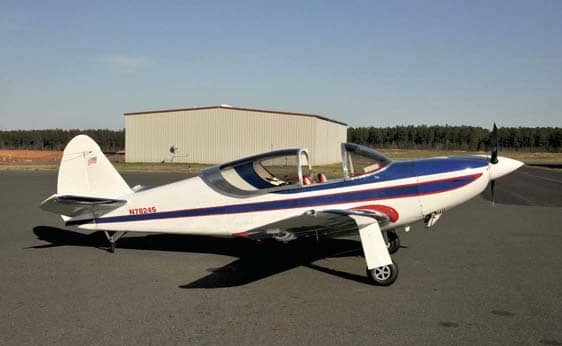 Not your standard Swift

Ren Babcock is a smart and affable thirty-something CFI with around 1,200-hours in his logbook who learned to fly on Cessnas. When he wanted to build up some tailwheel hours, his friend and fellow CFI Craig Winkelmann offered to check him out in his 1941 clipped-wing Cub, which he then shared with Ren.

Several years on, Craig had other plans. He’d always loved the idea of a Swift and decided to sell the Cub and buy one. He discussed this with Ren and offered to let him fly the Swift as well. Craig became fast friends with Bo Mabry, one of the most knowledgeable members of the Swift community. With Bo’s help in locating a suitable example, Craig purchased N7824S. This aircraft received its Airworthiness Certificate on 14 October 1946 as a Globe GC-1B Swift, with serial number 2242. In those days it would have been powered by a four-cylinder 125hp Continental C125 powerplant and fitted with a somewhat strange cockpit arrangement, with side windows and the top section of the canopy opening forward. I cannot imagine it would have been easy to get in and out, especially if the aeroplane was parked into a breeze with the top panel wanting to blowback onto your head! This window and hingeing canopy arrangement is a little bit like that used on the early P-51 Mustang Mark I and Mark II aircraft supplied to the RAF under a lend-lease arrangement− a very different design from the later, sleek look of the bubble canopy P-51D.

The Swift was first sold on 17 December 1947 to Safari Flying Service based at Teterboro, New Jersey with the registration N78242. It changed hands several times, including stints in Canada and California, receiving lots of modifications in the process, and finally being converted to ‘Super Swift’ spec in 2004. As a consequence, it is one of the most modified Swifts in the fleet, and what I see now sitting on the ramp is such a contrast to that early 1940s design. This Swift now looks sleek and purposeful, almost fighter-like and definitely inviting.

By the way, the title Super Swift is not an approved name: they all appear on the FAA register under the original designation. In reality, what now exists is a large community of Globe and TEMCO-manufactured Swifts with various levels of upgrades and modifications, although some of the purist owners still maintain their aircraft in a condition as close to ‘original’ as possible – including the beautiful polished metal finish.

In general, however, it seems that to qualify as a Super Swift, the aircraft must have been modified with an engine of 180hp (or more) a constant-speed or variable-pitch propeller and an improved engine cowling. All of the above provide the aircraft with a significant increase in performance, however many owners have not stopped there. Some of the most common additional modifications include a significantly upgraded panel and instrumentation, modified fin and rudder, reprofiled wingtips, Cleveland disc brakes,and auxiliary fuel tanks. You get the picture!

Not the only one with a reputation

In the history of aviation, there are quite a few aeroplanes that earned something of a reputation. These include the Cessna Bird Dog – which was renowned for its ground looping tendencies – and the Beech Bonanza. The latter became known as the ‘Doctor Killer’, although this was generally down to owners, many of them medical professionals, operating in conditions beyond their capabilities rather than any deficiency of the aircraft itself.

There are also aeroplanes that started life with a problem but were then suitably modified to correct their deficiencies. For example, the de Havilland DH.87 Hornet Moth was born with pointed wing tips. It was test flown by Sir Geoffrey de Havilland himself and two further prototype aircraft joined the flight test schedule to eradicate a number of teething problems. When production of the DH.87A began, the aircraft featured even more sharply tapered mainplanes, which were of the same area but two feet wider in span. During the first three years of production around 165 were delivered before it was discovered that, in certain circumstance, the aircraft demanded more skill than was possessed by the average private pilot. In 1936, the mainplanes were redesigned once again with square wing tips, to eliminate a vicious wing drop at the stall. Existing owners of the DH.87A were able to return their aircraft and have the wings replaced. Interestingly, the DH.88 Comet has similarly tapered wings and is said to possess similar stall characteristics to the DH.87A.

Time to take the controls

After an enjoyable air-to-air photoshoot over nearby Jordan Lake and the post-flight coffee, I switch rôles from photographer to pilot, and walk out to N7824S with Ren. The Swift is of an era before the subtle art of stressed-skin construction had been refined. If the designers and engineers had any doubts, they would beef parts of it up with extra rivets for additional strength. As a consequence, the aircraft was always heavy and had some areas of prolific riveting, something still obvious today – although the wings on this beautiful example have been rebuilt and are therefore much neater. Also, this aeroplane does not show the tell-tale signs of a lifetime of mishandling, especially to the leading edges and wingtips.

The aircraft sits purposefully on a wide undercarriage whose track is thirty per cent of the span−a similar ratio to the PA-28’s. The distance between the spinner and rather small-looking fin and rudder, located not far back from the wing, suggests the aircraft is short coupled and may lack rudder authority, especially tail-down.

The nose and cowling are smooth and considerably more ‘aerodynamic’ than the original. Underneath is a six-cylinder Continental IO-360 producing 210hp, driving a two-blade McCauley metal constant-speed propeller.

The lovely main undercarriage legs look to have been scaled down from the P-51 Mustang, and feature neat and effective Cleveland disc brakes. I am hoping that the combination of a wide-track undercarriage and effective differential braking may go some way to taming the Swift’s reputed desire to ground-loop on the unsuspecting pilot!

This aircraft features two auxiliary fuel tanks (each holding eleven US gallons) that were added to the wings when they were rebuilt. This brings the total capacity to forty-nine US gallons which, at an average burn of nine gallons per hour, gives you more than five hours of flying.

Finishing the sleek looks is a beautiful one-piece, sliding bubble canopy−one further upgrade on the original model. In addition to adding a few knots to the aircraft’s performance, it also improved the all-round view from the cockpit. At the very back is the fully-castoring, fixed tailwheel that looks like something out of an old Meccano construction set. It too is hydraulically damped, which makes it feel very solid, but if you bounce on landing, or mishandle it, I am assured by Ren that this tailwheel is able to handle the pressure. Most Swift aircraft now have a fully castoring tailwheel fitted, although there is a supplemental type certificate (STC) for a retractable tailwheel− which, interestingly, this aircraft did have, until it was removed by Craig Winklemann a few years ago.