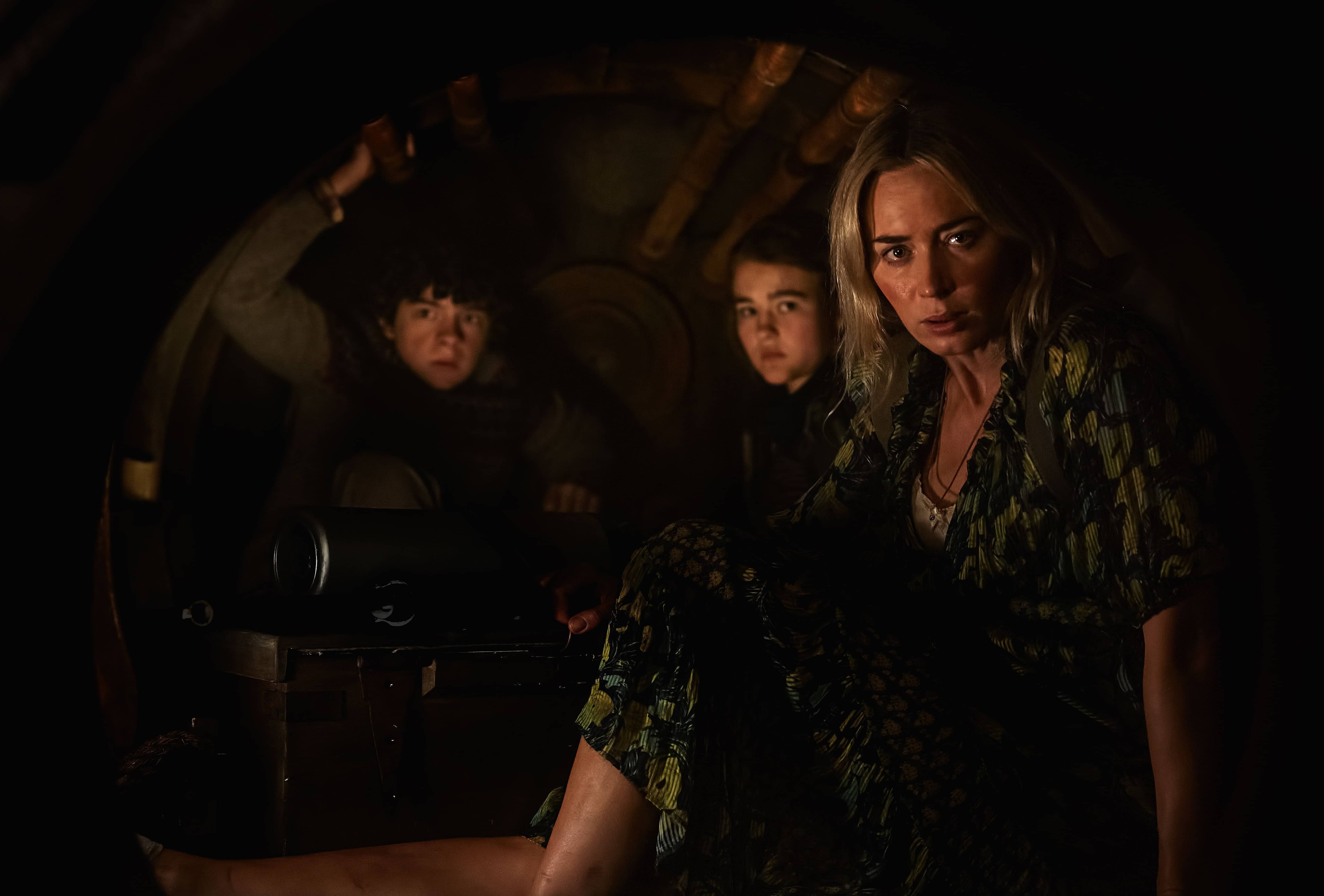 It was the hushed little horror that became a huge hit – both critically and commercially – so it’s little surprise that A Quiet Place is returning with a sequel. Total Film sneaked on-set of the super-secret production to discover how Part II is looking to repeat the trick; going bigger while also staying true to its beginnings…

JANE CROWTHER
Often on a film set, the atmosphere is one of cathedral-like silence. Crew scamper around whispering, the admonishment of ‘Quiet please!’ is shouted regularly, and any on-set dialogue is captured by mics and relayed noiselessly through headsets to those mutely watching proceedings. Amid the disused steelworks of Seneca in Buffalo, New York, on a bright August day before the 2019 Labour Day weekend, the production of A Quiet Place Part II observes no such repose.

In a film with very little dialogue, there’s no need for headsets, and in the cavernous mill building, as dust motes swirl, John Krasinski is enthusiastically bellowing orders to his buzzing team. An upbeat but commanding presence, he’s working fast to make use of the precious hours he has with his two child actors before they have to attend school. “Cillian’s going to come in and hopefully not decapitate my wife!” he jokes cheerfully as he maps out a scene where real-life spouse, Emily Blunt, fearfully rushes through the building with her on-screen kids before being ambushed by Cillian Murphy’s mysterious stranger, whirling her round and clamping a hand over her mouth. As the takes play out, Krasinski shouts out enthusiastic encouragement (“Great!” “More of that!”), and moves with the action as though he’s in the scene with the actors. He was a central character in the first film as well as writer/director, and the muscle memory of performing with this close-knit cast apparently hasn’t left him.

“One of the things in the edit that’s the most frustrating to me is editing out my annoying voice!” he says later when he gives Total Film a tour of the sets. “But also, the other half is me being an actor. This sounds super cheesy – but I do believe that when you’re into a real moment, as a director it’s such an honour for me to see these actors connecting to that moment. The last thing you want is for your director to go, ‘Cut! Alright, let’s try it again this way.’ So I try to give them notes in the moment so that they can keep going with whatever they think they’re doing.” He waits a beat. “And also just talk over their performance all the time…” 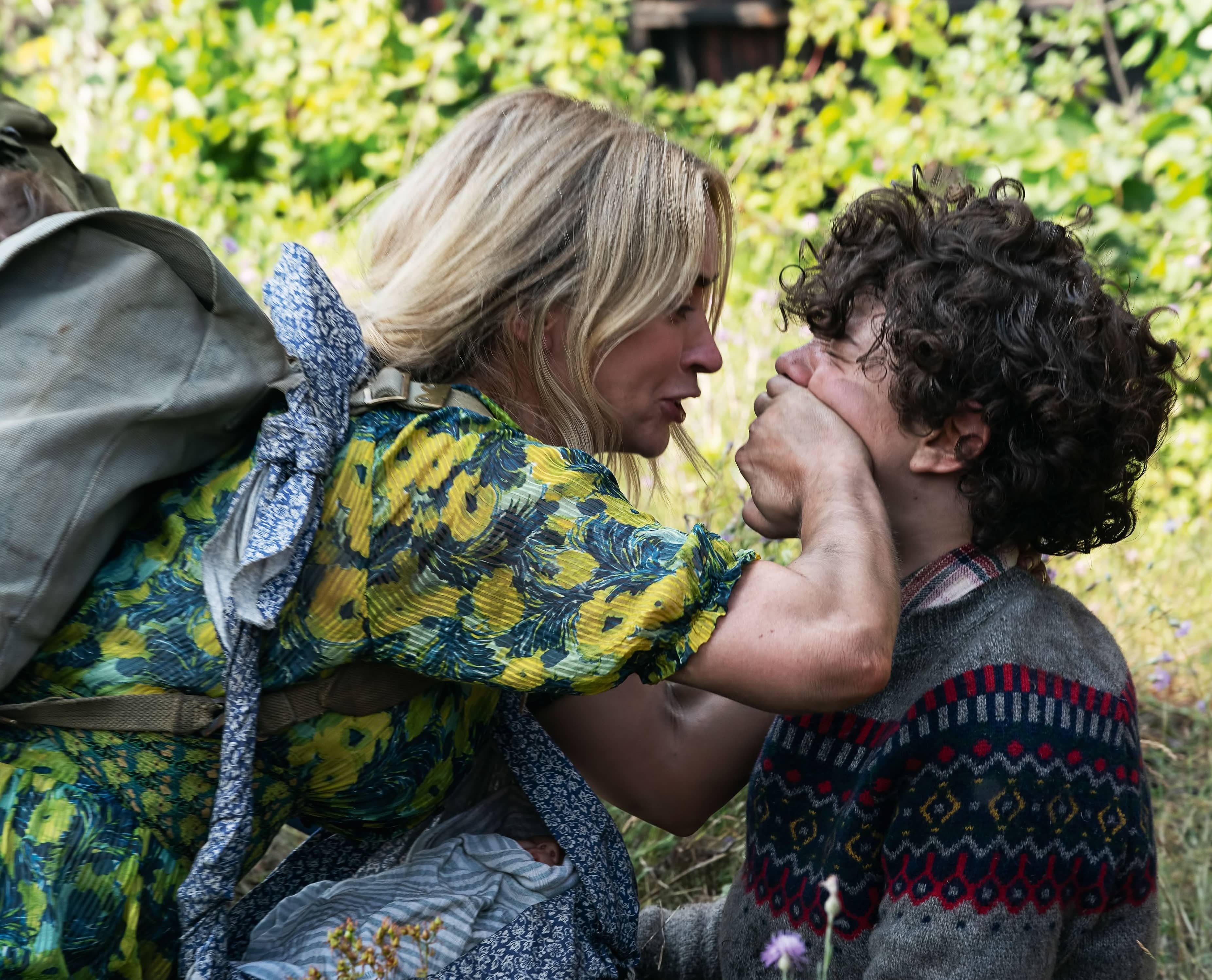 Though he’s a charming and self-deprecating host, that connectivity and the lack of sound is hugely important to this film, hoping to catch the same lightning in a bottle as its predecessor. Before A Quiet Place opened the South By Southwest festival in March 2018, it was just a small horror film written and directed by that guy from The Office. After it screened to rave reviews, its social-media footprint exploded and its opening-weekend figures soared – plus it gained the praise of one Stephen King (“an extraordinary piece of work,” he tweeted). A genuine sleeper hit.

The thinking man's blockbuster no one saw coming, it connected to audiences on an elemental and visceral level with its deceptively simple tale of the Abbott family living in a post-apocalyptic world where noise-attracted aliens prey on humans. Led by Dad, Lee (Krasinski), and Mom, Evelyn (Blunt), the Abbotts had survived thanks to ingenuity and their ability to use American Sign Language due to the hearing-impairment of their daughter, Regan (Millicent Simmonds). After a family tragedy and with Evelyn pregnant, the repercussions for making any sound lay heavy on the group, creating emotional fractures between Lee and Regan – and Regan and her sibling, Marcus (Noah Jupe). Spoiler alert, it doesn’t end well for Lee (“He’s a goner!” says Blunt) and fades to black as Evelyn and Regan face off against attacking ETs using the high pitch of a glitchy hearing aid to disable them…

At a taut 90 minutes and stacked with as much character study as jump-scares, A Quiet Place transcended its genre to court awards, became part of a conversation about ‘elevated horror’ and inspired fan theories about deeper themes. “I was gobsmacked!” Blunt recalls of her reaction to the buzz that built while she was filming Jungle Cruise. “Not only by just how many people went to see it and then told their friends to see it, and then it had this meteoric life that was not expected by me… but also the very deep metaphorical themes that people pulled out of it, some of which were intended, and some of which really weren’t. They found it really involving and exciting.” 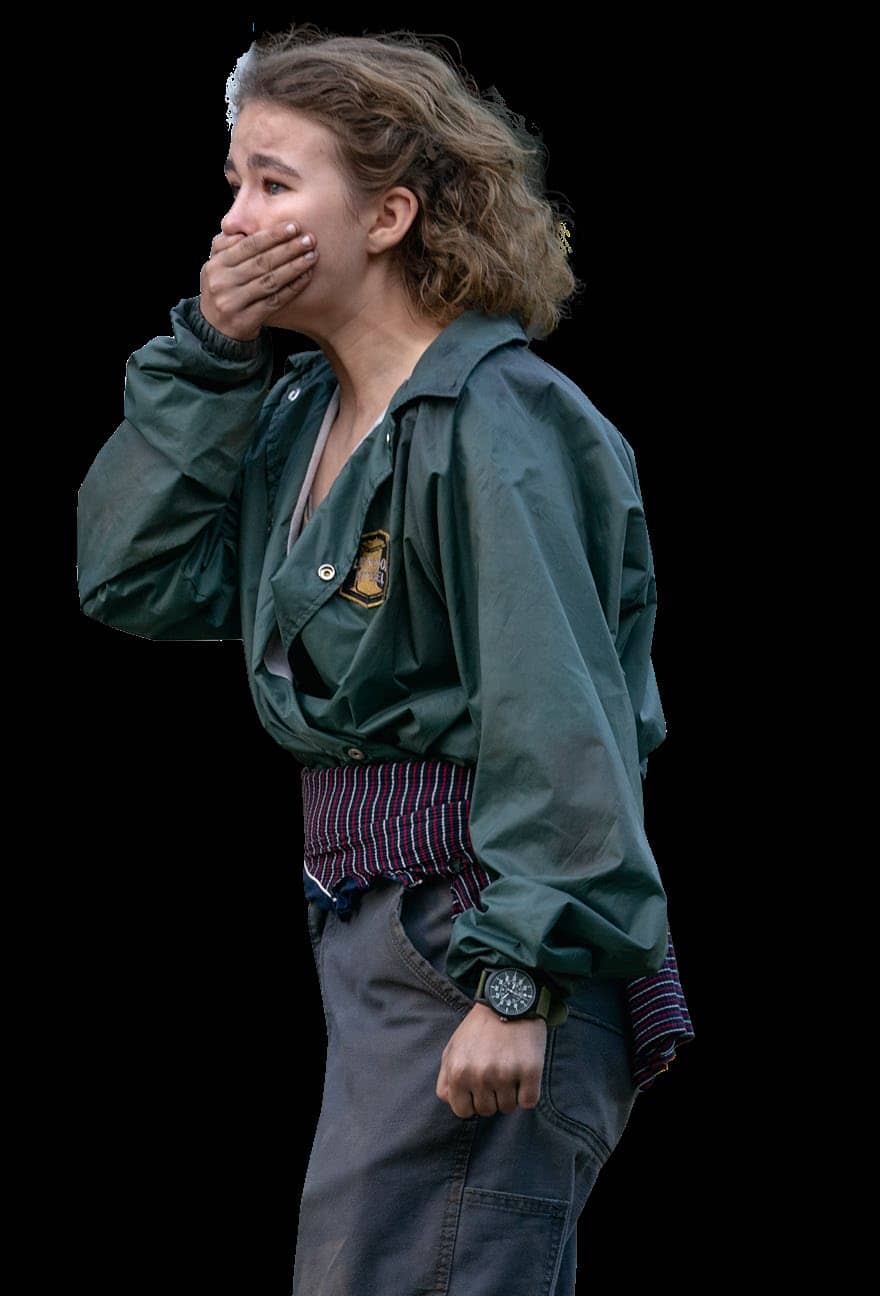 Of course with numbers and reach as big as it got ($340.1m, thank you very much), a sequel looked inevitable. But both Krasinski and Blunt were resistant to the idea. “You know, I wrote the first one to be one thing,” Krasinski recalls as we stand next to a set of the Abbott farm silo – made famous in a terrifying sequence in the first film. “And then when it did well, and [the studio] were like, ‘We’re going to go do a sequel’ – I thought, ‘Great. Go find someone else. It’ll be great. Enjoy it.’” Blunt agrees: “We were aware that the studio was probably going to make a sequel, with or without us. There was a sense of protection of this baby that John had created. And I think that ultimately he was always going to maybe grandfather the next one. But we were both very steadfast about not being involved. And then all of that mad reaction happened and he was suddenly like, ‘I have an idea. I don’t know. It’s just a beginning of an idea...’” 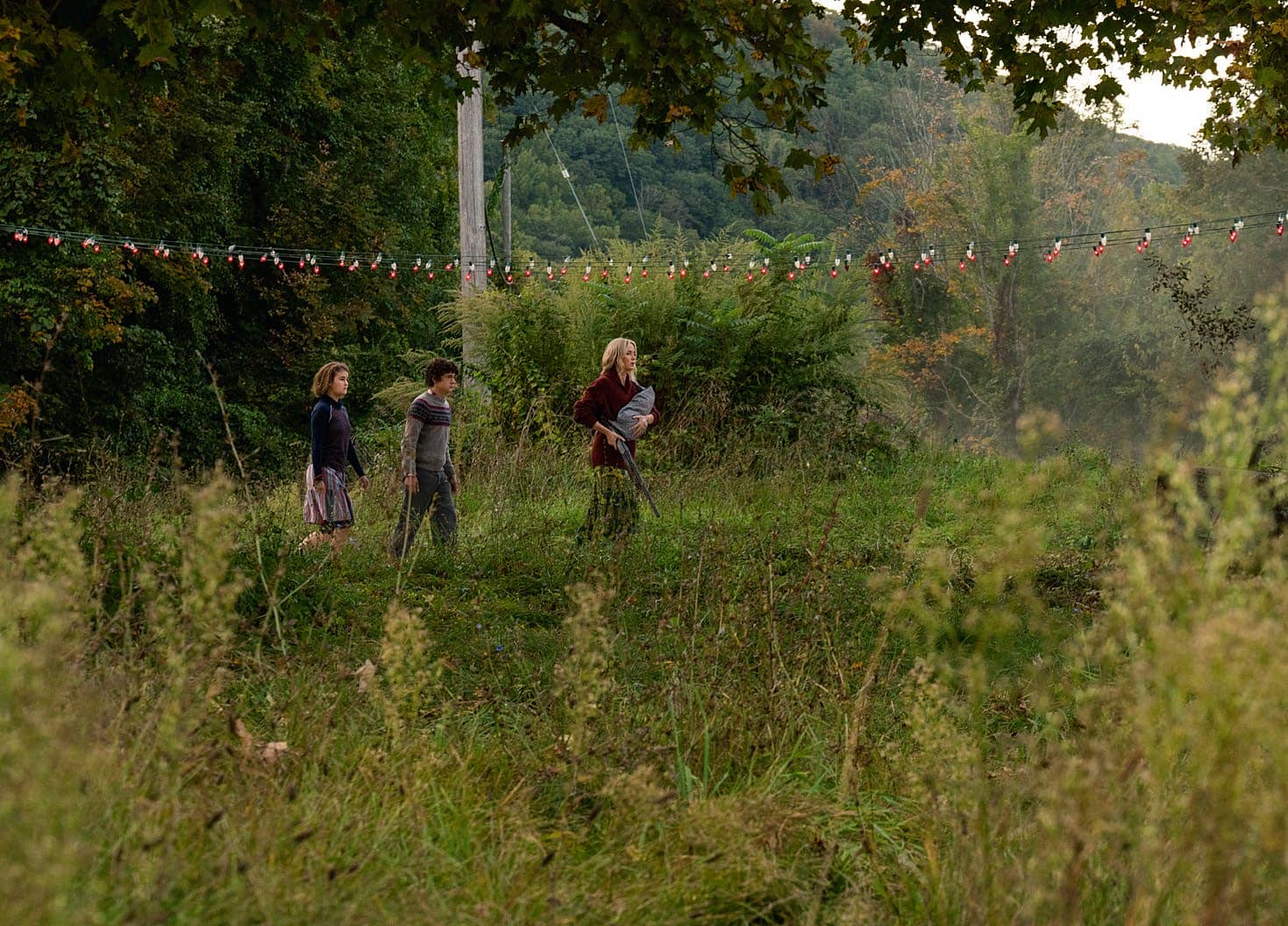 That idea was that in the absence of the patriarch, Regan would be made the new leader. Picking up literally seconds after the first film closes, Regan and Evelyn will battle the advancing creatures and in the aftermath, seeing their homestead on fire, realise where they have been sheltering is now no longer a safe haven. In the first film Lee had seen fires in the distance that he took to be signals from other survivors and Regan, using her father’s gathered intel and training, will push the family (now with an hours-old baby born in terrifying silence in a bathtub during a creature attack) to move away from the known (relative) safety of the farm to beyond the sound-deadening sand trails they had previously walked…