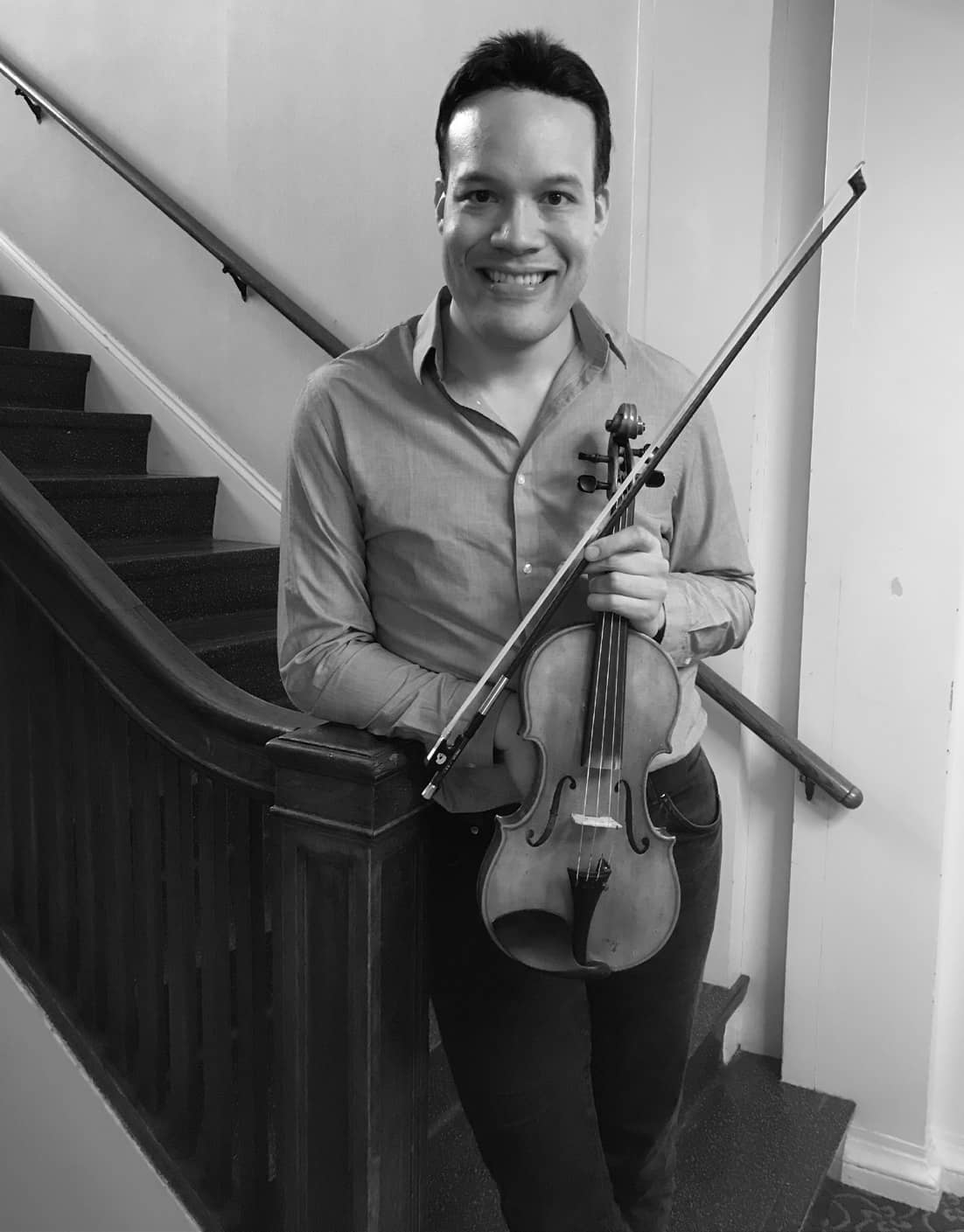 For anyone trying to learn to play Gypsy jazz, one of the main hurdles is becoming a fluent improvisor.

And improvisation is one of those mysterious abilities that even those who do it well have a hard time explaining. Fortunately for students of the genre, the recent resurgence of popularity in this dynamic string band music has inspired a new generation of teacher/performers to develop instructional materials and methods based on their own experience mastering the style. One of the most active educators is Christiaan van Hemert, a Dutch violinist and guitar player, who has developed an online instructional platform (rosenbergacademy.com) with Stochelo Rosenberg, one of the world’s top guitarists in the style of Django Reinhardt. In 2018, Christiaan joined the teaching staff at Django in June, the Gypsy Jazz instructional camp held each year on the Smith College campus in Northampton, Massachusetts (djangoinjune.com). During a break between classes, we found a quiet living room in one of the dorms to talk about Christiaan’s approach to teaching Gypsy jazz improvisation.

Christiaan: I was admitted to a special education for what they would call “talented young violin players” to train them to be soloists. We have a good orchestra culture in the Netherlands but not so much a culture of great soloists. So they tried to create something like they had in Russia or China, with a very intensive regimen for children. So I did that. I did learn how to play violin pretty well, with the technique, but it also kind of created an aversion against the classical world. There was a lot of competition and a focus on being the best. So when I finished the first part of that education when I was 15, I was looking for something else to do with my instrument. My father used to [listen to] many kinds of music, also Django (Reinhardt). And I loved that sound of (Stéphane) Grappelli. I said to my father, “I want to play that stuff!” I tried to get the sheet music, so my father called around to music stores until somebody finally said, “You know, I’m sure that’s improvised.” I had no idea. My father asked other people and he told me, “You have to change the notes or add notes.”

Was he a violinist?

No, he was not a musician. So nobody knew what that means, “playing jazz.” We listened to it. He had a huge record collection. It had Charlie Parker in it, and Django Reinhardt, and classical, tango, and Lou Reed, Bob Marley. I heard everything! Of course, he didn’t know how those music styles actually worked. I tried to do a little bit by myself. I started a little band but I had no idea. I was just making up stuff. Finally, there was this opportunity to study with a jazz violin teacher. But imagine, I come in from a classical background with Russian teachers who’d tell me, “Bars 8 to 16 next week, this étude, and these scales.” Then you practice six hours a day and next week you do it. But now I came in and the teacher said, “What do you want to play? What song do you want to play?” “I don’t know.” I started playing and he was, like, “Wait a minute. Do you know the chords for this tune?” I said, “No.” He said, “The first chord is G.” But it doesn’t mean anything to me! I didn’t even know which notes were in the chords! So it kind of changed the trajectory of his teaching. He figured, “Okay, I’ve got to teach this kid all the theory.” So it became more theory lessons. … I became an expert in theory. I never meant to translate that into actually playing. It took me in another direction, into arranging. Because then I bought books about orchestration and I started making a name for myself as an arranger and I started playing tango. I started making arrangements for string quartets, tango orchestras, big bands. At one point I got an assignment to write arrangements for (Dutch Gypsy jazz guitarist) Stochelo Rosenberg with a symphony orchestra. So I wrote those arrangements and, of course, there were solo parts. And then I was at the rehearsal, and he was playing great solos. Fantastic solos. We started talking and I realized he doesn’t know anything about theory! He didn’t even know the names of the notes. But every solo was fantastic. So I asked him, “How did you learn this?” And that was the first time that somebody just told me, “You know what I did? I transcribed every Django solo that was in the house.” So he learned to play those Django solos note for note. “But how did you then get to improvising?” “I realized that if I played ‘Sweet Georgia Brown’ in a different tempo than the original solo, then I had a problem. It was either too fast or too slow.” So he started making his own solos by combining different phrases from different solos. And those phrases became smaller and smaller and he started lifting phrases from other solos. So basically what he was doing was using licks. And that seemed like a genius idea to me. I started transcribing all Grappelli solos, like 60 Grappelli solos, making huge pdfs with lines. Same thing as Stochelo did. And that’s how I learned to play without ever studying theory again. Without actually using theory.

So you memorized a bunch of Grappelli solos. And then did you start chopping them up?

MORE STORIES FROM FIDDLER MAGAZINEView All