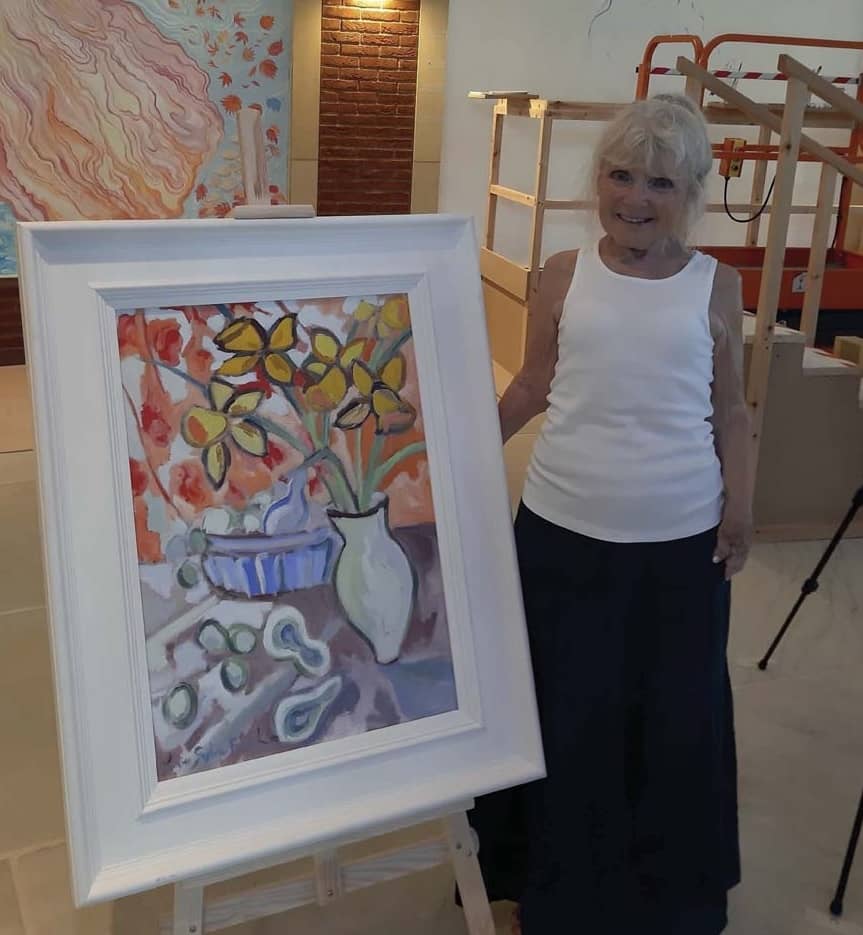 Internationally acclaimed artist Janice Sylvia Brock has unveiled Goddesses of Life, the most challenging physical and artistic commissions of her career, at Nirvana Spa in Sindlesham

Jance Sylvia Brock, whose life has been fractured by Still’s disease – a progressive and debilitating form of rheumatoid arthritis – has completed a series of murals at Nirvana Spa in Sindlesham.

The huge physical and artistic undertaking has involved the diminutive artist who, at just 4ft 11in, has painted four 11ft high arched expanses from gantries over the last four months.

Janice is renowned for her vibrant and dynamic paintings, courageous use of colour and beautiful representations of the female form. Depicting the four seasons, her murals are inspired by Greek and Roman myths. Colourful and engaging, the four feminine forms are painted with a lightness of touch and fin-desiècle elegance that belie her brutally crippled hands. They collectively form a masterpiece.

“When I was invited to paint these murals I didn’t hesitate. I have never steered away from a challenge in my life,” she says. “The sheer scale and timeframe of this commission has tested my health – but hey – I did it! It would not have been possible without the help of my friend and colleague, the renowned photographer Russ Bröckel.”

As a child, Janice was a good athlete and won medals for running and skating, so contracting Still’s disease was a terrible blow. “Spending 18 months in a hospital bed was a lonely and boring imprisonment,” she says. “At that time I was not able to walk so I prayed for God to give me a special gift. My father bought me a set of painting by numbers, but I quickly decided not to paint by numbers at all and did my own thing on the canvas board provided. I brought to life the Roman and Greek myths that I read about voraciously. Focusing on the painting was a distraction from the excruciating pain I was in. Through gritted teeth I forced my left hand to move. I wanted to produce something beautiful out of the pain.

“My bones are fragile and prone to fracture, and my fingers cannot grip so I hold the brush squashed between my two hands. I take numerous drugs every day to deal with the pain. All my joints have seriously deteriorated, including the vertebrae in my neck, which is a daily challenge.”

Janice has had her knees replaced 21 times. “I can walk but not for long. I have had at least one operation in every year of my life,” she says. 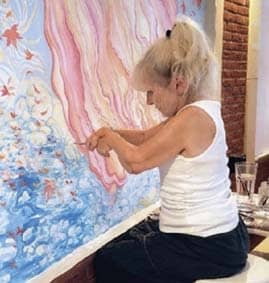 Nevertheless, Janice had her first exhibition at the age of 22 at the Withington Library in Manchester. “It was an occasion that I will never forget,” she says. “I had produced a collection of nudes that a woman took exception to. After viewing them she became hysterical and left the building screaming. The commotion attracted people into the library with the result that my exhibition of works was a virtual sell-out.”

In 2010, Janice exhibited in London’s world-famous Saatchi Gallery, and a year later, a private showing of her work was attended by HRH The Prince of Wales.

Janice now divides her time between her studios in the UK and Barbados; the latter a realisation of Janice’s lifelong dream to live in the sun.

“My gallery in Barbados has been open for 12 years and has welcomed collectors from many parts of the world,” she says. “I am lucky enough to have a loyal international following. My work hangs in collections throughout the world; The White House has two pieces, plus there are collections throughout Europe, America, Canada, Australia and New Zealand. I also paint commissions, including nudes, but the murals in Nirvana Spa have certainly been my most ambitious undertaking.