Alta California Becomes A State
This 1750 map captures the Spanish belief—based on the Baja Peninsula—that California was an island.
Will Bremen

A couple of decades after arriving in Mexico, Spanish explorers began to sail northward along the Pacific Coast. The first group was led by Juan Rodríguez Cabrillo. Setting out in three ships in June 1542, the men became the first Europeans to see San Diego Bay. The expedition continued beyond San Francisco without noticing its bay before turning around. They claimed the land that they had seen for the Spanish Empire. They called it California.

Other nations also explored the western coast of North America. In 1579, while sailing around the world, Sir Francis Drake resupplied his ship near Point Reyes in present-day Northern California. He named the land New Albion and claimed it for England. Neither the Spanish nor the English established a colony right away, however. 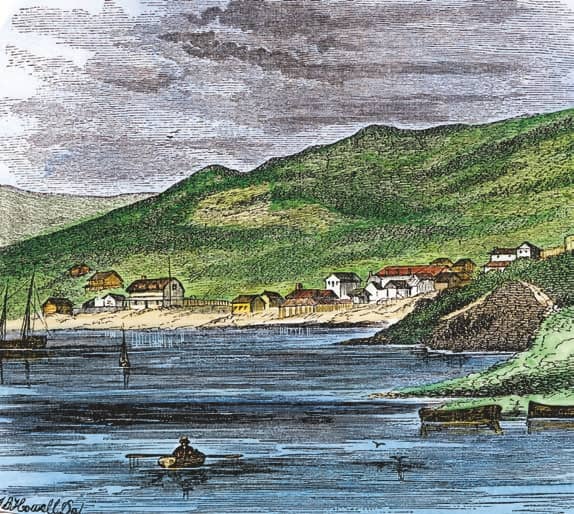 Two hundred years later, Europeans recognized that the Pacific Coast of North America was important for trade. Spain’s King Charles III ordered Spain’s Alta (Upper) California to be explored and settled. In 1769, ships carried an expedition to San Diego. There the Spanish founded the first permanent European settlement in California. Some members of that expedition, led by Gaspar de Portolá, continued their journey overland through California. They claimed present-day San Francisco for Spain.

Spain built a network of 21 missions along the coast to back up its claims to the land. Headed by Roman Catholic priests, the missions aided Spanish colonization and converted the Native Americans to Catholicism. The Spanish also divided the land into four military sections and constructed presidios to oversee and defend them. But the Spanish settlements were few in number and spread out over large distances.