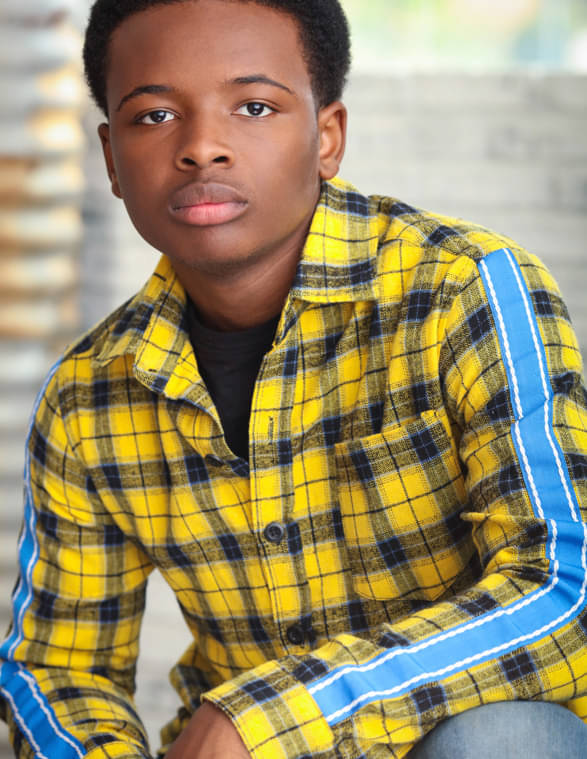 Teen director, writer, and actor, Dusan Brown has been named one of the 2020 U.S. Presidential Scholars in the Arts for his short film, Reece, where he served as writer, director, co-DP, editor, colorist and is featured in. Notably, he’s also won numerous other impressive awards for this film. Dusan can next be seen in the Netflix movie, Ma Rainey’s Black Bottom, starring opposite Viola Davis and Chad wick Boseman. Ma Rainey’s Black Bottom is based on the August Wilson play by the same name. Dusan sat down with Glitter to discuss his acting career, what it was like working opposite Viola Davis and Chadwick Boseman in the Netflix film, his short films, and his thoughts on the state of the nation. Find out more about this extraordinary writer, director, and actor who is just getting started.

GLITTER: How long have you been acting?

DUSAN: Pretty much all of my life. Booked my first print ad, I think, when I was about six or seven-weeks-old and my first commercial at about two or three-years-old for Kohls, I think. lol

GLITTER: What was your big break?

DUSAN: I wouldn't necessarily say that I've had that big break role, yet, but I've more so had many breaks along the way - each have kind of been building blocks. :) I will say, though, that as an eight-year-old, booking Disney's The Lion King on Broadway as Young Simba... that experience has been just... PHENOMENAL, then working with Chadwick Boseman in the movie 42 at age 10, knowing that I worked with The Black Panther BEFORE he was Black Panther, will go down in the history books for me as a great break... shouts to Casting Director Ms. Vickie Thomas & The Director Mr. Brian Helgeland for believing in me! :) But getting the call that I booked Netflix's Ma Rainey's Black Bottom, last summer, was surreal and having worked with Mr. Chadwick Boseman (a 2nd time), Mrs. Viola Davis, Mr. Glynn Turman, Mr. Colman Domingo, Mr. Michael Potts and spend an entire summer with Mr. Denzel Washington, was a young actor's dream come true. So perhaps that'll be my big break... you never know in this industry. I enjoy the work so much, I just take each role as they come and do my due diligence to bring to life that character as best as possible and not worry about what's next, but just hope that I've embodied the role enough to inspire and uplift viewers, as much as possible through the story the writer and directors are conveying.

GLITTER: What is your approach to auditioning?

DUSAN: I first read the breakdown, then the sides while highlighting my lines, then I thoroughly research the filmmakers attached, so I'll have an idea perhaps of their vision for the character, given their style for previous projects. Then I go back to the sides, then I make character notes on the back based on what the breakdown has given, in addition to what I've discovered about the character myself based on studying the sides, researching dialects (if from a certain period or region) and script (if available); then I review and read the sides, again, and start working through various interpretations to myself until I feel my read is in a natural, profound enough state, then I go to my Mom for up-coaching, finishing touches and nuisances.

GLITTER: What can you tell us about your role in the upcoming Netflix movie, Ma Rainey's Black Bottom?

DUSAN: If you're familiar with August Wilson's play, Ma Rainey's Black Bottom, then you'll also be familiar with my character, Sylvester. Sylvester is the nephew to Ma Rainey, who's played by Mrs. Viola Davis. My character is sort of her right-hand man, transitioning from a kid to this young man, learning to gain independence, earn his own money. That's about the extinct of what I can say about the character at this point, but I believe audiences will fall in love with Sylvester as they often have expressed their love for this classic character from the play, as well. I hope my interpretation doesn't disappoint. :)

GLITTER: What’s it like starring opposite Viola Davis and Chadwick Boseman?

DUSAN: Aww, man, again for a young entertainer, working alongside them on a daily basis... watching them shift into character... and literally BRINGING IT, every take, going hard, just blew my mind! It was extremely inspiring and motivated me to step up my game as an actor and made me so excited about my future as a filmmaker to dream of collaborating with such talented professionals that could bring my stories to life in such a way... it's almost indescribable. Just know that if I never work another day as an actor, I wouldn't be mad, because working with such legendaries in the game has taught me a lifetime of knowledge... of the importance of ownership... creating my own content... being true to self... and the importance of always reaching back to help others coming up behind me. I look forward to that, as an actor, writer and director.

GLITTER: How like or unlike your characters are you?

DUSAN: Regarding my character, Sylvester in Ma Rainey's Black Bottom, I'll start by saying I don't have a stutter in real life and my aunt isn't an iconic blues singer! (lol) So in more ways than not, I tend to be more unlike many of the characters I've played, so far, but can definitely find a commonality and for Sylvester that was the fact that he was coming into his own. And as I booked it the summer before my senior year of high school, I felt I was going through that life transition, as well. So, that's all I'll say about that... sshhh, no spoilers... if you haven't read the play, been living under a theatrical / entertainment rock (lol) or haven't come across any of the thousands of posts about famous playwright August Wilson or his beautiful, body of works.

GLITTER: Can you tell us about being named “2020 US Presidential Scholar” and how that came about?

DUSAN: Being bestowed upon the highest honor achievable by a high school student, for me, came about through an abundance of hard work, sweat and tears... and maybe even a little bit of blood! (lol) It took tremendous dedication on both ends, academics and creatively and wouldn't be possible to have achieved such an honor, without my family and friends who supported and helped me along the way, though. Being a Presidential Scholar is a great feeling of accomplishment and I look forward to continuing to collaborate with my fellow Scholars, as well as tapping the brains of my newly adopted mentors through YoungArts, as well as the resources available to us. Although we didn't get to take the traditional, all-expense, trip to DC, visit the White House and attend the various, regularly scheduled educational sessions and such, I'm hopeful that we'll still reap the benefits of the tremendous hard work exerted to receive the honor. I received my medallion a few days ago and if nothing else, it made my chest pop out with pride more than ever! (lol). But becoming a Presidential Scholar (Arts - Film) all started when I submitted my short film, Reece, to the National YoungArts Foundation competition. From there, out of 7,000+ applicants across all arts disciplines, I became 1/170 or so chosen as a Finalist, 1/10 in the Film category. Then out of the 170 finalist, 60 are recommended to the Department of Education as Presidential Scholar (Arts) Candidates. That application was probably about a 16-hour process (lol) and out of the 60 arts recommendations, Presidential Scholars selects their top 20 Scholars of the Arts, which included me! So a very lengthy, highly competitive process, but an extreme, national honor!

GLITTER: Can you tell us more about your short film, Reece?