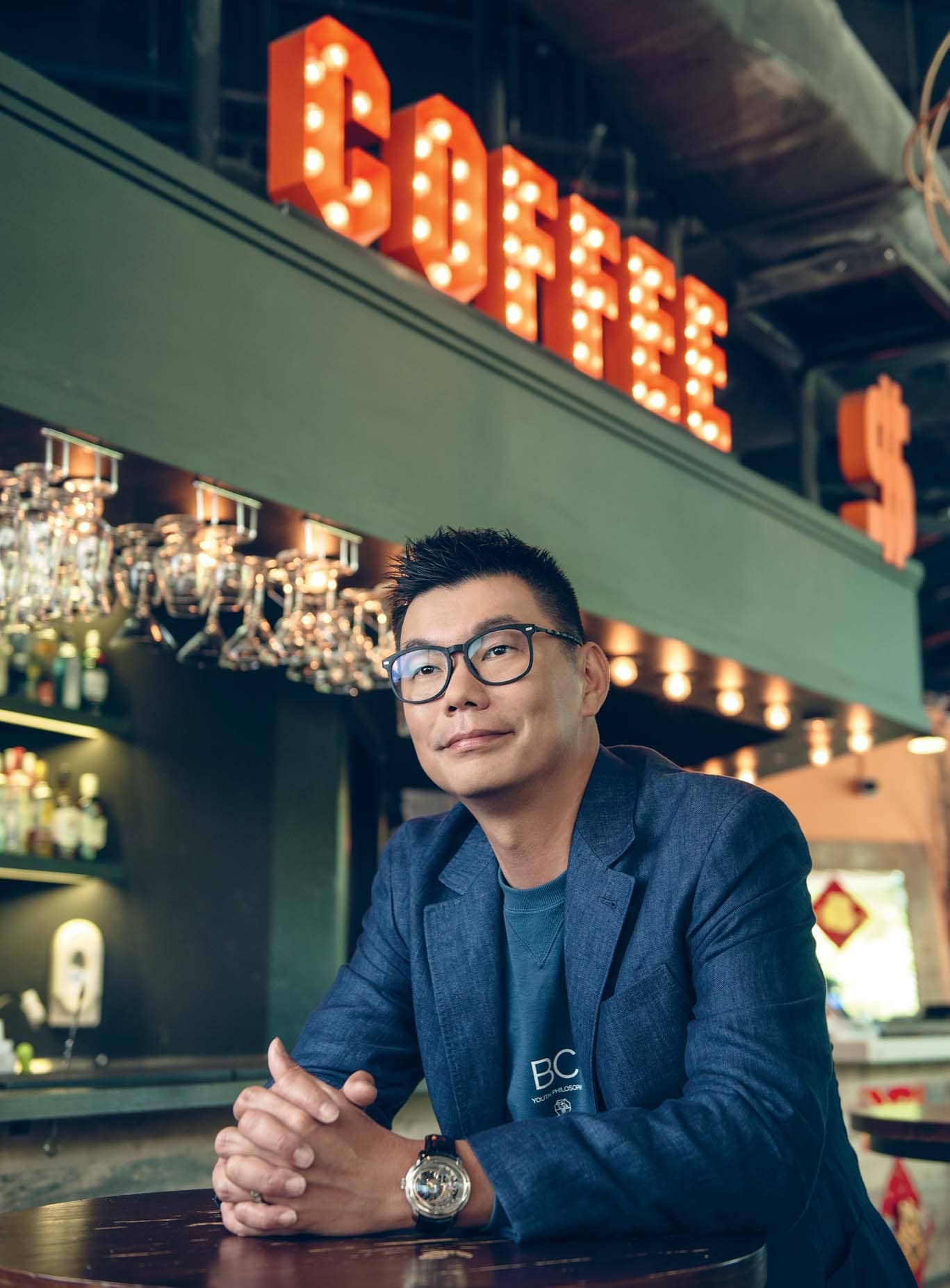 Mr. Alfred Chua showed up at Bodacious, a bar and bistro that he launched with a childhood friend, at half-past two in the afternoon. The lunch crowd had thinned by then and the staff were clearing tables and putting the house in order. My team, meanwhile, had sequestered a corner inside the establishment, and had begun setting up the photo equipment and hanging out the apparel they had assembled for the pictorial. I had not until then met Mr. Chua, 44, managing director of The Wok People Pte Ltd, a business that he founded with and runs with his sister Ms. June Chua, who is the CEO. He thrust his hand out as he strode in our direction, smiling broadly as if he had spotted a bunch of people that he knew but hadn’t seen in a while.

He is tall and has an easy-going air about him, the type of a man that is often described as “a people person” — warm, open, forthright. He was ready to take instructions, he told us casually, after asking if we had had anything to eat or drink.

Bodacious is a standalone branded establishment in Biopolis, a wooded precinct in the western part of Singapore where international biomedical organizations are massed. Although not a part of The Wok People portfolio, Bodacious is an interesting clue to Mr. Chua’s personality. It is cheery and convivial, flexible in its offerings of bistro food and bar concoctions, and appropriately designed. “We built this as a place for entertaining friends,” he said. It comprises outdoor and indoor dining areas, a well-stocked bar, and even an entertainment section where bands can play. This is not the first of this type of establishment that Mr. Chua has set up. He has run one in a shophouse in the West Coast but chose to lease it out after a few years’ run.

The Wok People operates in another sphere — Business & Industries (B&I) — where it manages employees’ canteens for companies. It is a dynamic and lucrative sub-sector of the food industry but also perhaps the most overlooked. The Wok People runs the facilities provided by the clients. Mr. Chua’s teams, currently an aggregate of 600 full-time staff, go in to cook the food and serve it to the employees.

As an institutional caterer, The Wok People is up there in terms of expertise, capacity, and innovation. It runs 65 canteens that feed employees of large hospitality and retail establishments, semiconductor and manufacturing companies, as well as those dealing in pharmaceuticals, petrochemicals and shipbuilding. It is not difficult to imagine the range of requirements that these companies have in terms of service delivery, hygiene and nutrition standards, and engagement provision for their employees — factors on which the profitability and longevity of any institutional catering business pivot.

The business earns revenue from the individual diners who pay them directly for the meals, as well as from clients who engage them to provide free food to their employees. Revenues from the individual sites differ relative to their sizes — The Wok People runs sites with anywhere from 300 to 3,000 employees — but average from S$30,000 to S$200,000 per month.

Before 2019 ended, The Wok People completed an M&A exercise that transfered its ownership to the Green House Co. of Japan, Ltd. Founded in Kawasaki in 1947, Green House started out as a dorm cafeteria operator at Keio University. “They do what I’m doing now, institutional catering, but they also service the healthcare industry, such as homes, nurseries, and tertiary and international schools,” Mr. Chua said. Green House also operates a chain of restaurants and manages its own hotels in Japan, along with businesses in South Korea, China and Vietnam.

Apart from the ownership, no major changes are immediately expected within the company, Mr. Chua revealed. As working company directors, he and his sister are expected to continue performing their jobs. However, he anticipates a change in market coverage. Among the objectives of the acquisition is building a stronger presence in Asia and using Singapore as the regional headquarter for that expansion. “Singapore has a very good reputation for corporate governance,” Mr. Chua underscored, “and Green House regards us as a promising company.”