WHO REALLY OWNS A JOHN DEERE? 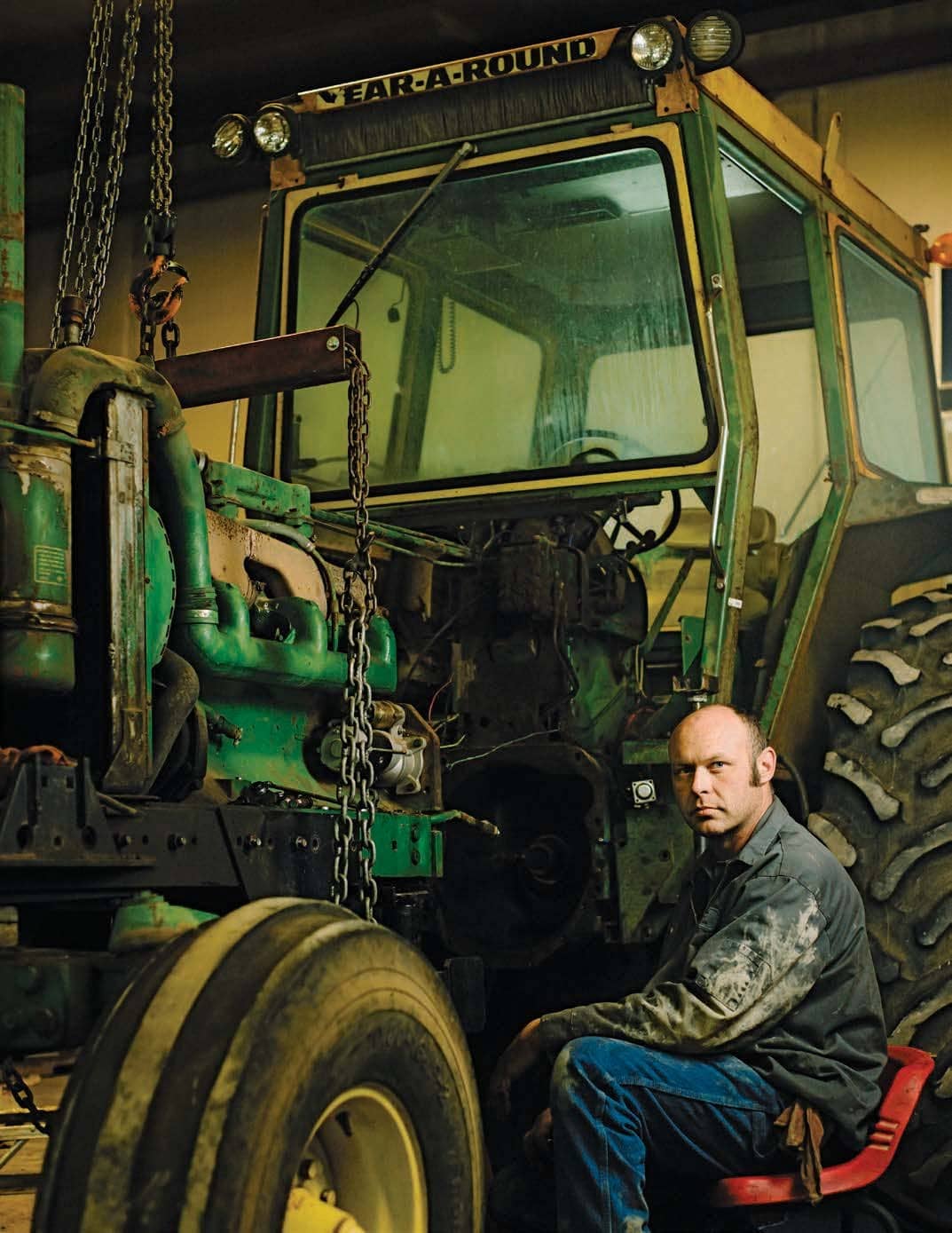 IS IT THE FARMER WHO PAYS $800,000 FOR A TRACTOR—OR THE COMPANY THAT WON’T LET THE FARMER GET UNDER THE HOOD?

IT’S HUSKER HARVEST DAYS, Nebraska’s biggest agricultural trade show, and Kevin Kenney is working the pavilions. The engineer, inventor, and inveterate manure- stirrer is trying to be discreet. He has allies here among the sellers and auctioneers of used tractors and aftermarket parts. There are farmers, mechanics, and the odd politician or two who embrace him. But enemies lurk everywhere.

Kenney leads a grassroots campaign in the heart of the heartland to restore a fundamental right most people don’t realize they’ve lost—the right to repair their own farm equipment. By sheer dint of personal passion, he’s taking on John Deere and the other global equipment manufacturers in a bid to preserve mechanical skills on the American farm. Big Tractor says farmers have no right to access the copyrighted software that controls every facet of today’s equipment, even to repair their own machines. That’s the exclusive domain of authorized dealerships. Kenney says the software barriers create corporate monopolies—and destroy the agrarian ethos of resiliency and self-reliance.

“The spirit of the right to repair is the birthright we all share as a hot-rodding nation,” he says, channeling his inner Thomas Jefferson and Big Daddy Don Garlits. Tall and trim at 55, with gray-flecked hair and a passing resemblance to a corn-fed George Clooney, Kenney has kicked up significant pushback against the computerization of U.S. agriculture. His crusade to pass right-to-repair legislation in Nebraska has spread to proposals in 20 states. Last spring, Senator Elizabeth Warren, campaigning for the Democratic presidential nomination, called for a national law “that empowers farmers to repair their equipment without going to an authorized agent.”

At stake for Deere & Co. and other big manufacturers is the free rein they’ve had to remake farming with data and software. The transformation has helped U.S. farmers increase productivity, but at the cost of a steady shift in operational control from farmer to machine. One of the world’s oldest and most hands-on occupations has literally become hands-off.

Anything a farmer does on a modern tractor, beginning with opening the cab door, generates messages captured by its main onboard computer, which uploads the signals to the cloud via a cellular transmitter located, in many Deere models, beneath the driver’s seat. These machines have been meticulously programmed and tested to minimize hazards and maximize productivity, Deere says, and it’s all too complicated for farmers to be getting involved in. The issue isn’t actually repair, says Stephanie See, a spokesperson for the Association of Equipment Manufacturers —it’s agitators who insist on the right to modify the machines.

“One tweak could cascade throughout an entire software system and lead to unintended consequences,” says Julian Sanchez, Deere’s director of precision agriculture strategy and business development. In a fast-moving vehicle weighing as much as 20 tons, he says, that could mean carnage. It doesn’t take much imagination to envision a coding mistake by a hacker, or even a well-intended farmer or mechanic, that sends a 500-horsepower combine careening into a farmhouse or through a clutch of workers eating lunch in the fields.

For a decade, the right-to-repair battle cry has rattled around rarefied circles of digital-rights activists, techno-libertarians, and hands-on repair geeks—primarily on the East and West coasts. Now, largely because of Kenney’s persistence, it’s tugging at the Farm Belt. Why, activists ask, should the buyer of an espresso machine or laser printer have to get replacement pods and cartridges from the original manufacturer? Who is Apple Inc. to dictate that only its certified parts can be used to repair a broken iPhone screen? What gives Deere the right to insist, as it did in a 2015 filing with the U.S. Copyright Office, that its customers, who pay as much as $800,000 for a piece of farm equipment, don’t own the machine’s software and merely receive “an implied license” to operate the vehicle?

“We’ve been telling people for years that if it has a chip in it, it’s going to get monopolized,” says Gay Gordon-Byrne, executive director of the Repair Association, a national coalition of trade, digital-rights, and environmental groups that promotes the repair and reuse of electronics. Gordon-Byrne serves as an informal adviser, mentor, and reality check to Kenney. She’s also helped him set a clear goal: a law modeled on a landmark Massachusetts statute, passed in 2012, that required the auto industry to offer car owners and independent mechanics the same diagnostic and repair software they provide their own dealers. After it passed, automakers relented and made all their repair tools available nationwide.

That’s what Kenney demands for farm equipment—and what Deere and its competitors reject.

At Husker Harvest Days, an ag industry blowout held every September in Grand Island, Neb., Kenney moves warily. After lunch, he drops by to see Kenny Roelofsen, co-owner of Abilene Machine LLC, a five-state retailer of used equipment and spare parts based in Abilene, Kan. Roelofsen’s company is instrumental in keeping older tractors in the field, an essential service for smaller farmers on tight budgets. But he says software barriers in newer machines are killing his incentive to make and sell parts. “I’ve stopped developing parts for machines built after 2010, because I know my customers can’t work on them without software,” he says. “Only giant corporate farms can afford newer equipment. For the small guy, it’s not economically feasible.”

Deere’s pavilion at Husker Harvest Days occupies a huge corner lot decked out in green and packed with gleaming new machines. Kenney is talking quietly there beside an enormous 9000 Forage Harvester, priced at about $600,000, when a familiar face approaches. It’s Willie Vogt, executive director of content for Farm Progress Cos., the agricultural publishing company that produces Husker Harvest Days and several other big farm shows. Deere is one of three corporate sponsors here; it also sponsors Farm Progress’s namesake show, which will be held in Iowa in September.

Vogt stops to chat. Kenney tenses up. Vogt, whose bio says he’s covered agriculture for 38 years and oversees 24 magazines and 29 websites, says he’s still not ready to publish stories on the right to repair. “It’s a very complicated issue that generates more heat than light,” he says.