PLEASE RISE for the KING of GERMANY 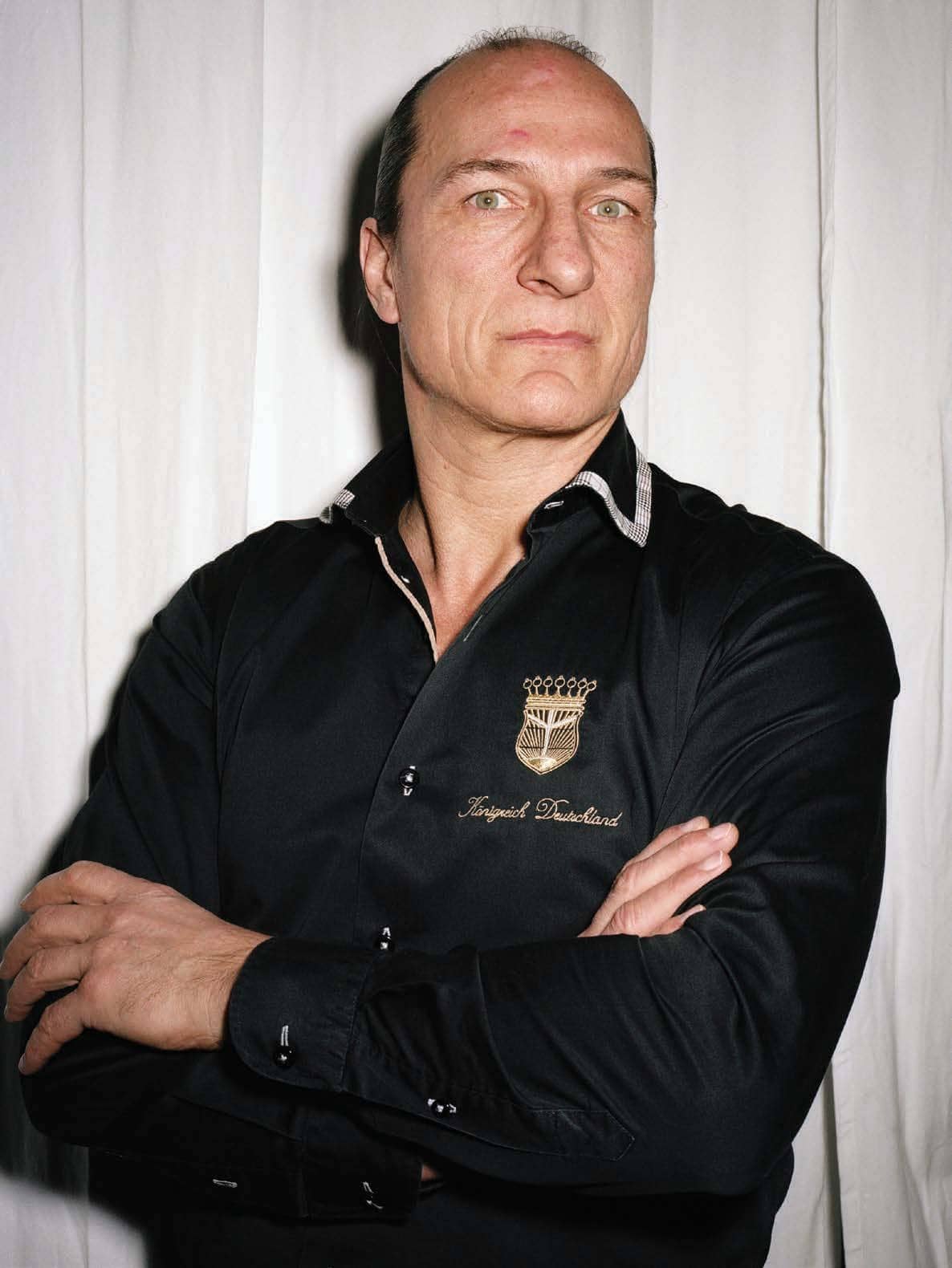 PETER FITZEK WAS A LEADING LIGHT IN THE REICHSBÜRGER MOVEMENT, WHICH DENIES GERMANY’S VERY EXISTENCE. HE FOUNDED A KINGDOM AND OPENED A BANK—THEN THE GERMAN GOVERNMENT STARTED ASKING WHERE THE MONEY WENT

PETER FITZEK IS THE KING OF GERMANY. AT 54, HE HAS THE ponytail and square jaw of an ’80s-movie terrorist—or perhaps a karate instructor, which in fact he was before ascending to the throne. Like other monarchs, Peter tends to be identified by his first name. His dominion offers its own passport, currency, and health-care plan, and it boasts more than 1,300 subjects, some of whom lived, until recently, in a sprawling compound in Wittenberg, 60 miles southwest of Berlin. Most important, he rose alongside a woman tabloids called his queen: Annett Ullmann, a model and waitress who was brunette and beautiful and wore lavender silk shirts to his court appearances.

When he meets journalists, Peter brings a binder of legal documents to support his claim to the throne. It’s smaller than the meter-high stack he typically lugs to court, where he’s found himself for violations such as speeding and the illegal possession of nunchucks. He records his conversations with reporters, a habit developed after a comedy troupe catfished him into a confrontation in the lobby of a Frankfurt hotel. (He ended up in a fistfight before stunned tourists.) His microphone has a sticker proclaiming that it’s owned by one of his followers, placed there so German tax authorities wouldn’t seize it to compensate some once-loyal subjects from whom he was accused of embezzling more than €1.3 million ($1.4 million).

Presented with a recorder, Peter talks and talks. He talks about how he healed an ex-girlfriend who was abused as a child by Satanists, using only his hands. About how a cabal of shadowy elites, including Rockefellers and Orthodox Jews, spread Covid-19 to boost drug profits and compel Germans to accept implanted biosensor chips. How a sniper once shot his car on the autobahn, but divine intervention caused the bullet to only nick the windshield. (He knows what you’re thinking, but a policeman friend told him there’s no way it was a rock.)

King Peter’s subjects are adherents of the Reichsbürger movement, whose members believe Germany doesn’t exist. The republic, they contend, is a limited liability company controlled by the Allied victors of World War II—and, according to the more anti-Semitic, the Rothschild family. Reichsbürgers print their own passports, often refuse to pay taxes, and clog courts with paperwork, along the same lines as the U.S. “ sovereign citizen” movement.

And like their other American kin, QAnon, the far-right conspiracy theory alleging a “deep state” plot against Donald Trump—they’re products of the digital age of unreason. Reichsbürgers are indoctrinated by low- budget YouTube talk shows hosted by the likes of Jo Conrad, who says Freemasons, lizard people, and child-murdering cults have overrun Germany. Converts protest outside the Reichstag, which some say is guarded by a laser cannon. For fun, they stream Reichsbürger hip-hop. In 2018, Germany’s domestic intelligence agency identified about 19,000 Reichsbürgers, nearly double its estimate of two years earlier. The true number, officials say, is likely far greater.

Peter, for all his troubles, is a genial leader. His optimism follows from an expedient logic: Every legal win proves the soundness of his arguments, and every loss proves the corruption of the German system. He’s so enjoying himself that you don’t want to spoil the fun by raising the matter of those euros the German government was trying to find. It imprisoned him and confiscated his cash, his property, even his piano. He’s fought in the courts, in the media, and in police custody to defend his treasure—and to keep the government from asking more questions.

IN 2008, AS ECONOMIC CRISIS SWEPT ACROSS EUROPE, PETER knew his moment had arrived. Since before German reunification, he’d been a Trottel, a Depp, a Versager: a loser. Born in East Germany in 1965, he was a friendless introvert with an alcoholic father and an overbearing mother who made him clean his plate to the point of vomiting. Peter wanted to become a teacher, but his grades were too poor, so he worked as a cook. Then he married and had two children, started teaching karate, and became a video store clerk.

In 1991 an investor from near Stuttgart, in the prosperous West, persuaded Peter to co-found a slot-machine business with him. It was his big break, until it wasn’t. His partner used his knowledge of the German legal system to take the company. Peter was just another Ossi, poor and unsophisticated after nearly 50 years of communist rule, outmaneuvered by a slick Wessi. He and his wife split up the following year.

Adrift in the early 2000s, Peter began reading. He devoured esoteric texts and dabbled in black magic, claiming visions of angels and demons. He also pored over law books and developed what some attorneys describe as an astonishingly vast, if not particularly cogent, knowledge of the legal system. And he found a new belief that helped him make sense of his life’s failures: Germany wasn’t a legitimate country.

The first Reichsbürger (“citizen of the Reich”) was Wolfgang Ebel, an East German transit worker. In 1985 he notified the U.S. Embassy and his local town hall that a U.S. diplomat named “Mister Kowalski” had confided an explosive secret: Because the Allies and Germany never signed a formal peace treaty after World War II, the German constitution of 1919 was still in effect. Ebel declared himself chancellor of the true state and changed his answering machine message to announce the new government. “His activities show the signs of mental illness,” the Stasi concluded after surveilling him for years.

When the Wall fell, Ebel’s delusions metastasized. The country’s true borders were those from 1937, encompassing half of present-day Poland. The German government was a corporation serving as a front for Anglo-American (and yes, Jewish) financial interests. It was wild stuff, festering mainly on the political fringes.

Then came the internet, and later the financial crisis. All over the country, Germans were angry about the economy, migration, and the European Union. As the euro zone wobbled, men—the majority of Reichsbürgers are men over 40— began popping up at a store in downtown Wittenberg where Peter had started selling esoteric books and promoting his view that an alternate government was possible. He offered membership cards for €120 a year and began accepting “investments” for what he called a “savings account,” collecting at least €61,000 by the end of 2008, court records show.

Peter also began exploring another kind of magic, fiat currency, pitching a famously cash-obsessed nation his bright and colorful Engelgeld, or “angel money.” He conveniently pegged the notes to the euro. Denominations included a seven, a number he imbued with deep significance. There weren’t many ways to spend the money, but Peter, echoing gold bugs everywhere, says it had value “as an inflation-free store of purchasing power.”

Now attracting cash and interest, Peter decided to create NeuDeutschland, or “New Germany,” a country primarily of the mind and YouTube. “You send your kids to institutions that train them as slaves,” Peter tells a group of normal-looking Germans in one video posted to his country’s channel. “The systems that you use make you behave like slaves. But you choose that.” The group participates in a few party tricks, including one in which four people lift someone from a chair with their fingers. The ease with which they perform the feat, Peter says, confirms the existence of energy fields and the malleability of gravity. (It’s actually timing, weight distribution, and the surprising strength of the human finger.)

Euros poured in. In 2009, Peter collected nearly €40,000, a fifth of which he put toward a dilapidated factory on the outskirts of Wittenberg. The next year he took in more than €180,000. In 2011 it was €852,000. With his followers now numbering in the thousands, he took out a €650,000 mortgage on another old factory and set about renovating it (a project he’d never complete). He paid workers an hourly rate of €4 and 4 Engelgeld, redeemable at the compound’s sausage shop. In 2012 he acquired an even larger property, an abandoned hospital that could someday house several thousand people.