Milo Yiannopoulos Is The Pretty, Monstrous Face of the Alt-right 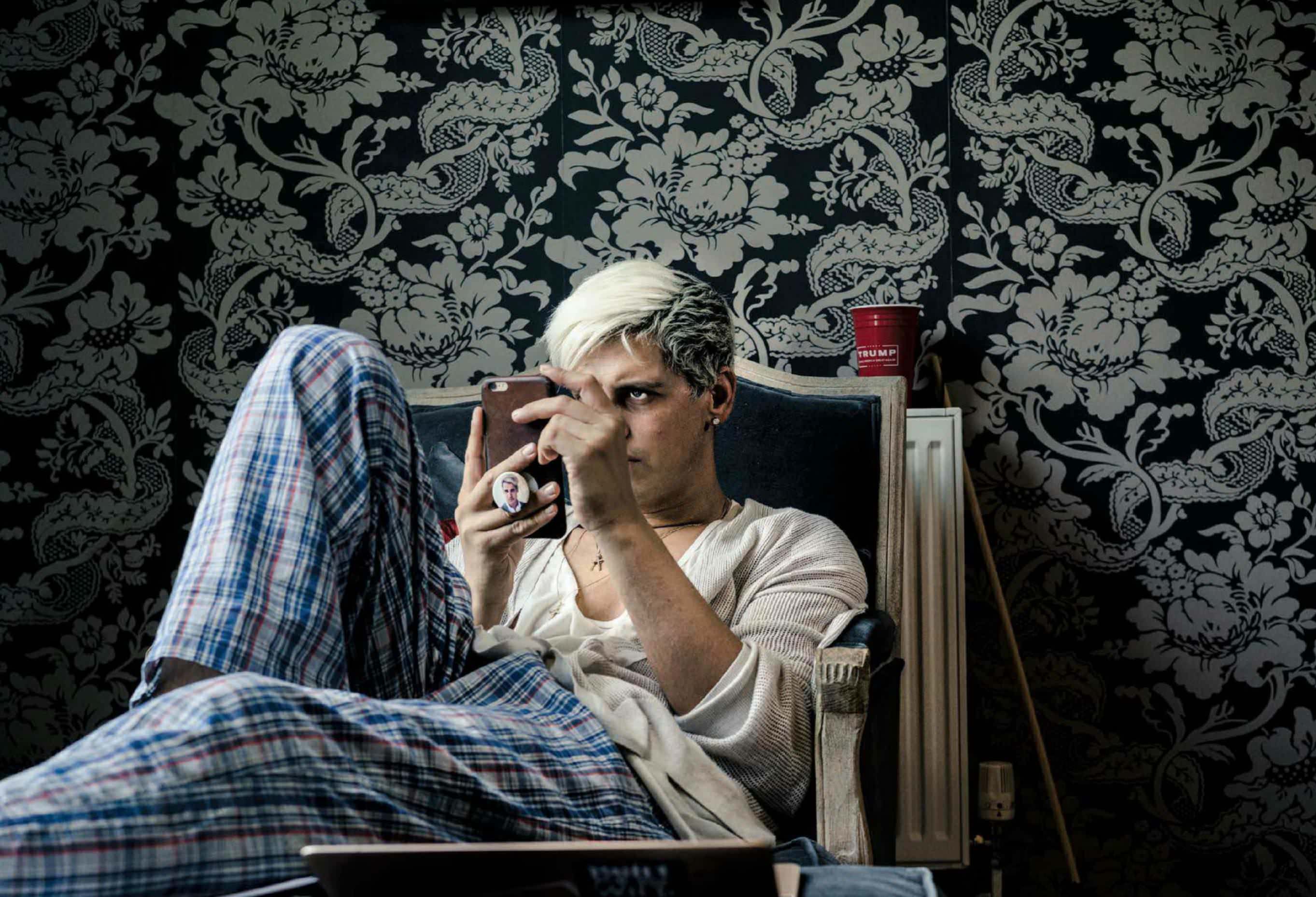 “I have ridiculously bad eyesight, but I have learned to live with an impressionistic view. Life is a Monet painting,” he says, taking off his glasses. “I wander around enjoying myopia.”

At 4 p.m, Milo Yiannopoulos puts on a pair of glasses for the first time today. He examines himself in a mirror to see if he wants to add a gray suit to his purchases, which will push his bill to almost $12,000 at Savile Row’s Gieves & Hawkes. He’s buying clothes for his next round of college speeches in, as his bus announces in huge letters next to five giant photos of him, the Dangerous Faggot Tour. It resumed at Texas Tech University on Sept. 12 and is scheduled to hit campuses including Columbia, Dartmouth, the University of Alabama, and the University of California at Berkeley before concluding at UCLA in February.

Yiannopoulos is the 31-year-old British tech editor and star writer for Breitbart News, where he’s the loudest defender of the new, Trump-led ultra conservatism, standing athwart history, shouting to stop immigrants, feminists, political correctness, and any non- Western culture. Yiannopoulos gained his initial fame as the general in a massive troll war over misogyny in the video game world, known as Gamergate. He was permanently banned from Twitter in July after the social media company said his almost 350,000 followers were responsible for harassing Ghostbusters star Leslie Jones. He still has nearly 275,000 subscribers to his YouTube speeches, and CNBC and Fox turn to him as the most notorious spokesman for the alt-right, the U.S. version of Europe’s far right (led by England’s Nigel Farage, France’s Marine Le Pen, Austria’s Jorg Haider, the Netherlands’ Geert Wilders, and Germany’s Frauke Petry). Their followers’ politics are almost exactly the same: They’re angry about globalization— culturally even more than economically. They’re angry about political correctness guilting them about insensitivity to women, minorities, gays, transgender people, the disabled, the sick—the everyone-but-them. They’re angry about feminism. They don’t like immigrants. They don’t like military intervention. They aren’t into free trade. They don’t like international groups such as the European Union, United Nations, or NATO—even the International Olympic Committee. They admire the bravado of authoritarians, especially Vladimir Putin. Some are white supremacists. Most enjoy a good conspiracy theory.

But members of the alt-right, unlike their old, frustrated European counterparts, are less focused on policy than on performance. Their MO usually involves pissing people off with hyper masculine taunts. They call establishment and even Tea Party Republicans “cuckservatives”—because they are cuckolded by the Left. They do most of their acting out online, often by organizing on 4chan or Reddit and then trolling targets on Twitter. The alt-right is a new enough phenomenon that in August, Republican House Speaker Paul Ryan—running against an alt-right candidate in a primary—mistakenly called it “alt-conservatism” on a radio show. “It’s a nasty, virulent strain of something,” he said. “I don’t even know what it is, other than that it isn’t us. It isn’t what we believe in.”

As Donald J. Trump has become the candidate of the altright, Breitbart News has become the movement’s voice. The two merged semi officially in August, when Breitbart’s chief executive officer, Steve Bannon, quit his job to run Trump’s campaign. And Yiannopoulos, whose byline on the site is simply “Milo,” is Breitbart’s most radioactive star.

“Milo is the person who propelled the alt-right movement into the mainstream,” says Heidi Beirich, who directs the Intelligence Project at the Southern Poverty Law Center, which tracks hate groups and describes the term “alt-right” as “a conscious rebranding by white nationalists that doesn’t automatically repel the mainstream.” Beirich says she’s not even sure if Yiannopoulos believes in the alt-right’s tenets or just found a juvenile way to mix internet culture and extreme ideology to get attention. “It’s like he’s joking: ‘Ha ha, let me popularize the worst ideas that ever existed,’ ” she says. “That’s new, and that’s scary.”

Despite being the alt-right’s mouthpiece, Yiannopoulos won’t say for certain if he’s one of them. Earlier that day, lounging on a couch in the living room of his apartment, located in a huge residential complex a good 45 minutes from Central London, he replaces Wagner with Chopin so he can talk more easily. He turns to Allum Bokhari, a 25-year-old half-Pakistani Oxford graduate, who used to work for a Liberal Democratic member of Parliament and now writes for Yiannopoulos at Breitbart, and asks, “Am I a member of the alt-right?”

“No,” says Bokhari, who wears a white dress shirt, gray blazer, and gray trousers to work at a desk next to a garment rack in Yiannopoulos’s living room. “Because they wouldn’t have you. You like Israel a lot more. Some on the alt-right would describe you as a degenerate.”

Yiannopoulos, wearing a pearl bracelet, a huge diamond in his ear, and a necklace with a gold dog tag, nods in agreement. His nods shake his blond extensions. He likes to brag that he’s a bottom for tall black men and that he used to hold a paint sample called Pharoahs Gold 5 to men at clubs to see if they were dark enough to have sex with. He wants to self-publish a Kindle e-book so he can go on television shows with the chyron “Author of Satisfying the Black Man Sexually,” though he’d need to alter the title slightly, because the book Satisfying the Black Man Sexually is already on his shelf. “That’s why I don’t like Planned Parenthood. They kill all those black babies. In 20 years, they could be my harem,” he says. He sees no room

for white gay men in liberal parties anymore, because all white men, he says, are treated as enemies of multiculturalism. Plus, he says, being a gay Republican reinstates the illicitness that homosexuality has lost.