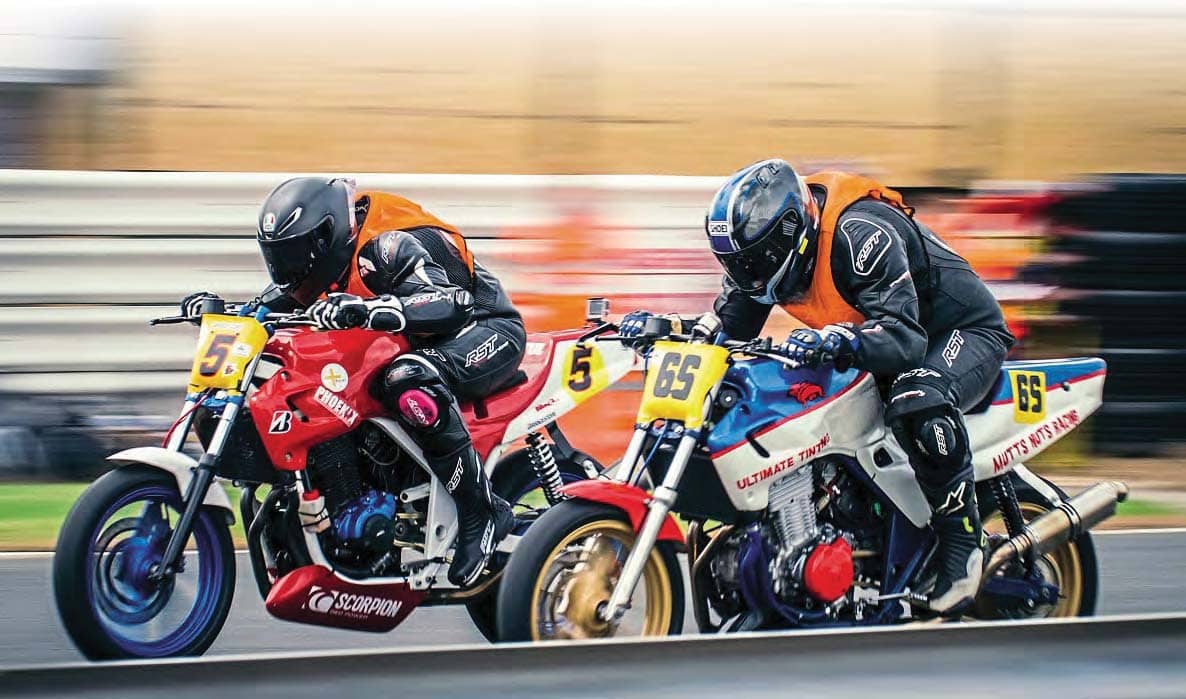 With pre-testing and the opening CB500 round under their belts it was time for some schooling for our Fast Berks, a lesson via the school of hard knocks!

The opening round had been pretty successful for teammate Gary ‘Bridgestone’ Hartshorneand I as we started our first full season with the East Midlands Riding Association (EMRA) on our Honda CB500s.

I had scraped into the points in both the CB500 and Mini-Twin series, completing three of the four races. Gaz was getting quicker, earning three finishes in the top 10 and making his presence felt with the quick boys.

My intention was to race a full season, but not look any further forward than that at this stage. Gary, however, was obviously looking more long-term as his new purchase demonstrated, rolling into the paddock for round two in his new Iveco motorhome. Twin berth, bathroom, kitchen, TV and bike storage in the back, this is a proper bit of kit that we all benefitted from: at last the Bridgestone CB500 Race team had a proper base.

Our first-round friends set up around us. Jimmy Reynolds’ awning was up to the right as he tinkered with his SV. Nick Hyde and James Barley had their CB500s on the paddock stands to our left, with caravans and Transits all tucked round the back for less lavish sleeps than Gary would be getting. But Gary was going to need his sleep as a frustrating race day faced him.

One of the main reasons I got into CB500 racing was the fact that these bikes are bulletproof, compared to the TZR250 that both Gaz and I had experienced the year before; basically, these bikes are a doddle to maintain.

But then you can be as prepared as you like, but the one ingredient necessary for a successful day on track which you can’t control is luck. For the 2019 season I had an abundance of it, where Gary didn’t seem to have any at all.

Come race day and my usual battle of nerves and faltering self-belief kicked in as soon as I woke in the back of my hire van. ‘What the hell was I doing here in Leicestershire at 9.30 am on a Sunday morning, when I could be safe at home, drinking fresh coffee, listening to the Archers omnibus?’ Once again all such thoughts had gone by the time we entered the track for qualifying. Here, Gary’s problems started. Lasting one lap of CB500 qualifying, he missed the Mini-Twins qualifying altogether, got a DNS for the first CB Race and a DNF for the second. He did redeem his weekend with two finishes in the Mini-Twins with a 17th and 14th, which was not bad considering he started both races at the back of the grid, but Gary was not here for the mid-teen finishes that I was actually quite satisfied with.