These Women Are Not Real 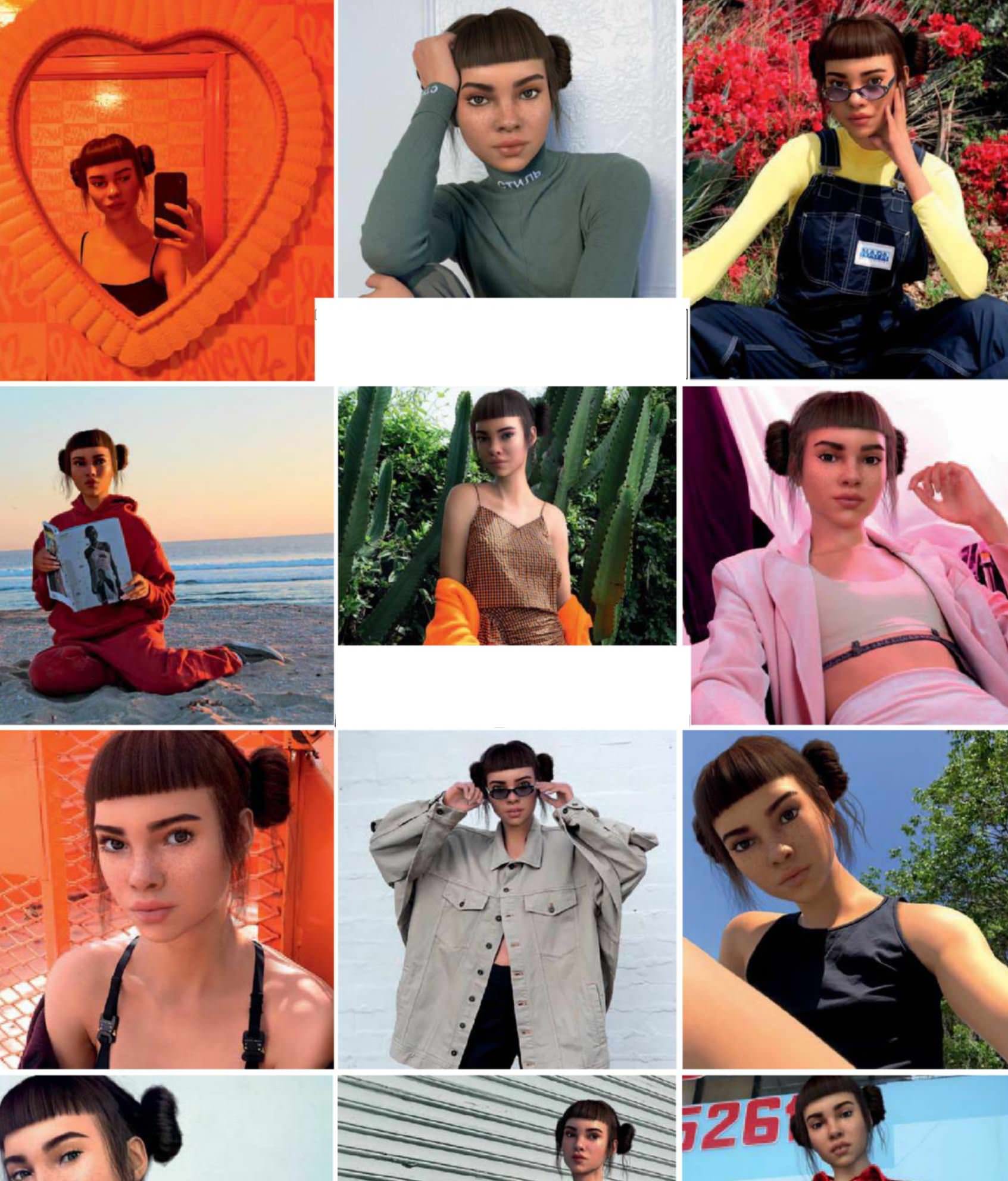 These women have millions of Instagram followers, front-row seats at fashion week and the latest designer clothes … but they’re not real. This new social-media trend is the most futuristic yet: computer-generated avatars that look, talk and behave like real people. But, asks HANNAH-ROSE YEE, is this really the future of the influencer industry?

Hannah-Rose Yee
Miquela Sousa has a constellation of freckles dusted across her nose. Every week she posts a selfie featuring those freckles to 1.4 million followers via her booming Instagram account, @lilmiquela.

She is 19 years old. She is a slashie – model-slash-singer-slash influencer extraordinaire – with two ear-wormy singles that have 1.5 million monthly streams on Spotify, and she lives in Los Angeles. Miquela gets hangovers, goes to the gym and loves ice cream, Alexander Wang and the religious experience that was ‘Beychella’ (Beyoncé’s – aka Queen Bey – spectacular 2018 Coachella performance).

‘My days vary depending on my mood,’ Miquela tells me over email. ‘I guess you could say I’m a late riser. I usually get out of bed around 11am.’ On an average day she heads to her music studio or catches up with friends. In the evenings she follows a strict routine: she washes her face (‘I’ve been told never to go to bed with a dirty face!’), meditates and switches on her lavender oil diffuser. ‘Winding down at the end of the day is particularly tough for me,’ she says. ‘But I’ve found this routine really helps calm my mind.’

So far, so normal. But Miquela is not like you or me. In her words, she is a robot designed by Brud, an enigmatic Californian company that specialises in ‘robotics [and] artificial intelligence’, although many people believe she is merely a digital avatar. Make no mistake: although she poses in real-world scenarios alongside real people (such as Australian influencer Margaret Zhang and the actor Tracee Ellis Ross), and although she works with brands such as Prada – and sat front row at its February fashion show – she is not a human being.

And she’s not alone, either. Joining Miquela at the vanguard of this new trend of digitally manipulated influencers are Lawko, another Brud creation; Shudu, known as ‘the world’s first digital supermodel’, who was created by a fashion photographer using 3-D modelling technology; and Bermuda, a blonde, blue-eyed pro-Trump avatar.

The latter was even supposedly locked in a months-long feud with Miquela, hacking her account in April and forcing her to post an unsettling statement on Instagram. In it, Miquela admitted that she was ‘built by a man named Daniel Cain in order to be a servant’ and bestowed with astonishing levels of artificial intelligence – before Brud rescued her and ‘reprogrammed’ her to be free, never once telling her that she was a robot. Faced with the irrefutable evidence of her virtuality, Miquela Sousa had an existential crisis. ‘I feel so human,’ she wrote on Instagram. ‘I cry and I laugh and I dream … I’m so upset and afraid.’

This isn’t an episode of Black Mirror. You haven’t stumbled into a robotics lab by mistake. This is all happening on Instagram. Today. And it could very well spell the future of the influencer industry.

Three years ago, Cameron-James Wilson grew tired of London and, as the Samuel Johnson adage goes, he grew tired of life. After almost a decade as a fashion photographer, he believed that he had yet to produce a defining piece of work. ‘I felt that I hadn’t shown the world what I was capable of,’ the 29-year-old says.