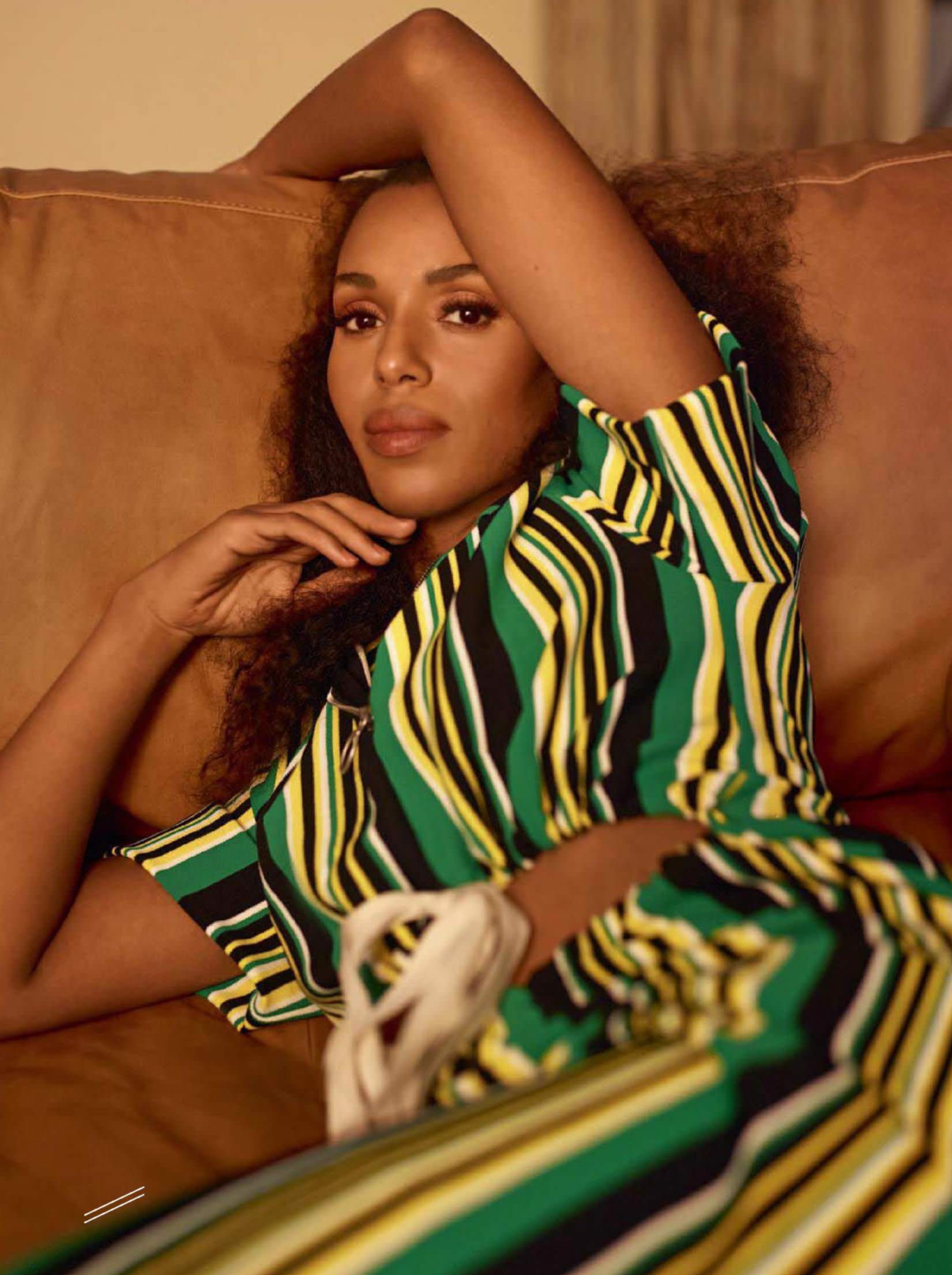 After seven seasons, Olivia Pope will go down as one of the most powerful female leads in TV history. But beyond the Beltway fixer, who is Kerry Washington? Broadway star? Producer? Activist? Yes, yes, and yes

Janet Mock
The Santa Monica Mountains are blurred by an impenetrable fog when I arrive for a hike along Mulholland Drive in Los Angeles. It’s 6:05am and Kerry Washington rolls down the window of her Audi compact SUV. ‘I’m soooo sorry. It apparently doesn’t open until 6:30am,’ she says, ‘but we can chat in the car. Come in!’

‘The woman has bested nature,’ I think as I slip into the passenger seat. My feet share space with a soccer ball, and she laughs. ‘I’m literally a soccer mom,’ she says, noting that her husband, former NFL cornerback and actor producer Nnamdi Asomugha, bought the car for their full house, including her stepdaughter; their daughter Isabelle, four; and their son Caleb, two.

I know this is the closest I will ever get to the notoriously private celebrity’s off-camera life. She’s managed to be the star of a network series, invited into people’s homes every week on Scandal (aka The Fixer in South Africa), yet maintained enough of a distance at the height of her fame to secretly marry in 2013 and have her first child in 2014 without the world getting access to a single detail. That’s some Olivia Pope shit. The Kerry who slays red carpets and spent seven seasons proving that the colour white was created for her, makes way for off-duty Kerry in a visor and a pouf of curls. She sports a ‘Still With Her’ shirt, sweatpants and New Balance sneakers. The only hint of glamour is princess-cut diamond studs.

Kerry has a way of making the simplest thing feel significant. Infusing her characters, who often exist at the margins, with meaning, humanity and realness is what makes her such a powerful actor. I’ve watched in awe as she has brought to life women from all walks of life: a young mother in high school (Save the Last Dance); a transsexual sex worker (Life is Hot in Cracktown); one of the wives of a dictator (The Last King of Scotland); a brutalised slave (Django Unchained); a law professor breaking her silence about sexual harassment (Confirmation); and a black woman fixing white people’s problems in the US capital.

‘I am drawn to stories that I feel allow us a window into worlds we normally don’t have access to and give voice to characters we tend to look away from as a society; stories that make us pause and consider the other and see ourselves in the other,’ Kerry says. ‘It is my homework to three dimensionalise a character, which often hasn’t been fully three-dimensionalised in the writing. For a lot of people, my characters may be the very few black women that they spend time with. So for me to paint her in any way flat or stereotypical or within the framework of social norms or our habits of not fully taking in women of colour and walking by them – I have a responsibility to do something different.’

Her duty to do her homework remains at her core as she embarks on the next phase of her career as a producer. Though she ‘kind of fell into’ producing – starting with the 2016 HBO film Confirmation, about Anita Hill’s experiences regarding the 1991 Clarence Thomas Supreme Court nomination hearings – she soon realised that it was ‘everything’ to her. Her production company, Simpson Street (the Bronx block her mother grew up on), has a slew of television and film projects on its slate, including The Mothers, a Warner Brothers film adaptation of Brit Bennett’s acclaimed novel; Universal’s workplace comedy 24-7, co-starring Eva Longoria; psychological thriller The Perfect Mother; and an adaptation of Celeste Ng’s best-selling novel Little Fires Everywhere, for Hulu, in which she co-stars alongside fellow executive producer Reese Witherspoon.