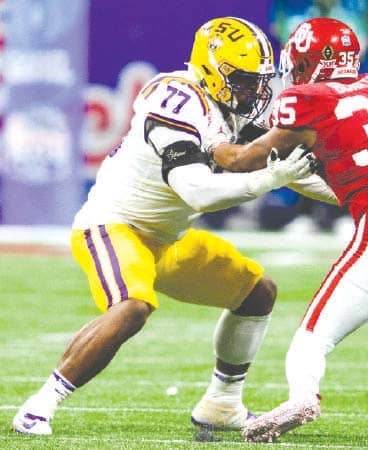 The fourth round has been interesting for the Red skins over the last decade.

Kirk Cousins in 2012. Bashaud Breeland in 2014. Jamison Crowder in 2015. Samaje Perine and Montae Nicholson in the same fourth round of 2017. Bryce Love and Wes Martin last year and now another duo.

Saahdiq Charles and Antonio Gandy-Golden bring the usual hope and excitement that the Redskins will land a stud at a cheap cost.

Here’s the way we should look at it. If both turn out to be consistently good, that should be enough for them to contribute to a winning organization and culture change for at least four years.

While we have no idea if the Redskins will win under coach Ron Rivera, and if the culture will be completely changed, a good process and draft sustainability often creates both. There’s no doubt that the second of the two fourth-round picks, GandyGolden, will be a seamless fit in the culture club.

Charles will fit in if he can keep himself out of trouble that dogged him at LSU. There are varying accounts of what exactly happened, but it’s believed that he was suspended for six games last year due to a team violation. However, those that cover LSU on a local and national basis have indicated that the problems go beyond just a simple incident. That means there were more issues.