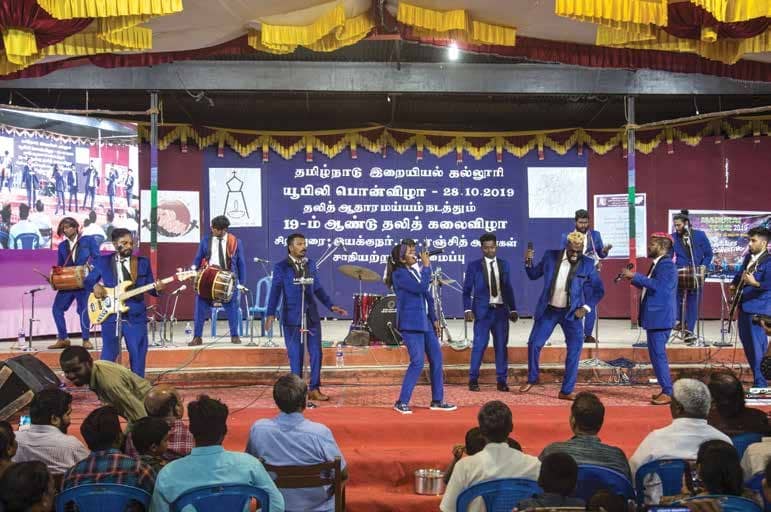 On the evening of 6 January 2018, about five thousand people trickled into the grounds of the CSI Bain Matriculation Higher Secondary School, in the Chennai neighbourhood of Kilpauk. The rows of chairs in front of the stage quickly filled up, leaving the open ground for the rest of the audience to occupy. It was the Tamil month of Margazhi, which lasts from 16 December to 13 January. In Chennai, this “auspicious” month is synonymous with the Carnatic music season. Scores of music lovers from around the world, most of them from the Brahmin community, throng the concert halls of southern Chennai to listen to their favourite classical musicians, who are also mostly Brahmin.

That year, however, a 19-member musical group called the Casteless Collective, composed of artists from marginalised communities, set the stage for a different sound. With instruments considered “impure” solely because they are played by the Dalit community during funeral processions, the band fused gaana songs—a genre of Dalit urban folk songs, sung on the streets of northern Chennai—with rock and rap music, and belted out 20 songs of resistance in front of a mass audience.

The mere physical presence of the band, all clad in tailored grey suits, sporting ostentatious hair colour and playing “inauspicious” music, made a statement: annihilate caste, and its rules that accord purity and superiority even in music. Their songs themed on beef and reservation have since gone viral, with over two million views on YouTube. After their first event, the band has performed at least fifteen shows in both urban and rural areas, including a three-day mega event—the Vaanam Arts Festival—in December 2018.

Pa Ranjith envisioned an independent musical group, with gaana at its core, that would rail against all forms of oppression and convey BR Ambedkar’s ideology through music.