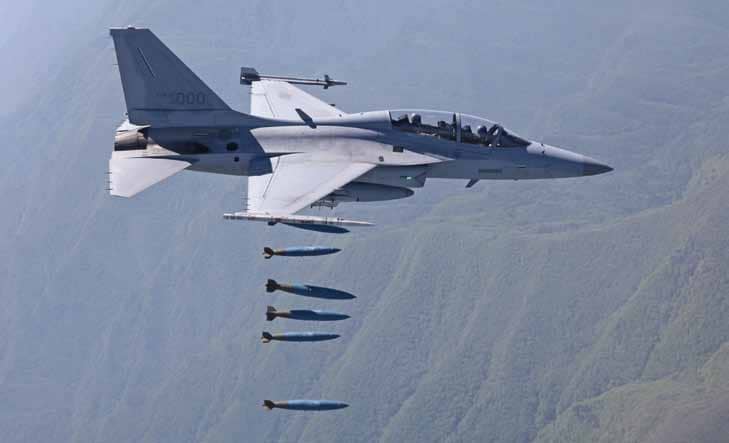 There is now a growing range of ground attack aircraft available now, the purchase of which will not break a nation’s defence budget.

Counter insurgency (COIN) air operations in Asia have shaped and been shaped by many campaigns. The French in Indochina from 1946-1954 and Malayan Emergency from 1948-1960 were among the earliest to witness COIN operations in the region. The United States was heavily involved in the Vietnam War for 20 years until 1975, where unguided bombs, rocket propelled explosives and even napalm were dropped in huge amount on the North Vietnamese Army (NVA) and Viet Cong. Indonesia’s government took on the East Timor freedom fighters from the mid-70s until the late 90s, while the Philippines still wages a war with Islamic militias in the south of the country. Malaysia too has carried out its own anti-terrorist operations in Sabah in 2013. Thailand has also experience terrorism activities in its southern region.

Air power always plays a significant role in trying to defeat insurgents and freedom fighters, known simply as terrorists by their enemy. This has been particularly prevalent in conflicts within Iraq, Afghanistan and latterly Syria against Daesh. The media plays a major role in the dissemination of information with rapid reporting via satellite links, which is why precision guided munitions, targeting pods and EO/IR sensors have been relied upon to avoid collateral damage and the killing of innocent people. All this can come at a hefty price and politicians as well as military commanders understand there are much cheaper options to using an Lockheed Martin F-16 or Fairchild Republic A-10. Dropping million-dollar precision guided munitions (PGMs) by jets that costs tens of thousands of dollars an hour to operate, just to get a terrorist escaping on a motorbike or a cadre of militia is economically unacceptable these days.

Today, cheaper $30-$40 million aircraft with much lower operational costs yet still armed with high technology such as laser guided rockets is what many in the military are aspiring to operate. The United States Air Force (USAF) has been searching for a new light, counter-insurgency, ground attack and reconnaissance aircraft since 2009 to fulfil its light attack/armed reconnaissance (LAAR) programme. This has evolved into the OA-X (Light Attack - Experiment) although there has still been no decision, mainly due to political objections.

Why is this so important to Asia? Because if the USAF was to select an aircraft, it could open the way for more orders for the winning manufacturer, particularly in Asia. The competition sees the Sierra Nevada Corporation/ Embraer A-29 Super Tucano face off with the Textron AT-6B Coyote, and the USAF is looking to acquire 24 of them by 2022 for around $1 billion. The $40 million per aircraft price tag might water the eyes of some Asian air force commanders, but undoubtedly the operational cost would be lower than most fighters as would the new generation weapons. The Textron Scorpion jet was also evaluated, while Aero Vodochody wanted to participate with its much upgraded L-159 Advanced Light Combat Aircraft (ALCA), the F/A259 Striker. However, the US authorities were not interested, preferring a turboprop instead. The Striker has now been abandoned and the future of the Scorpion is also questionable.

According to budget documents, the “the light attack aircraft will provide a deployable and sustainable multirole attack capability, capable of performing a diverse array of attack missions, including but not limited to close air support, armed reconnaissance, strike coordination and reconnaissance, airborne forward air control, and interdiction.”