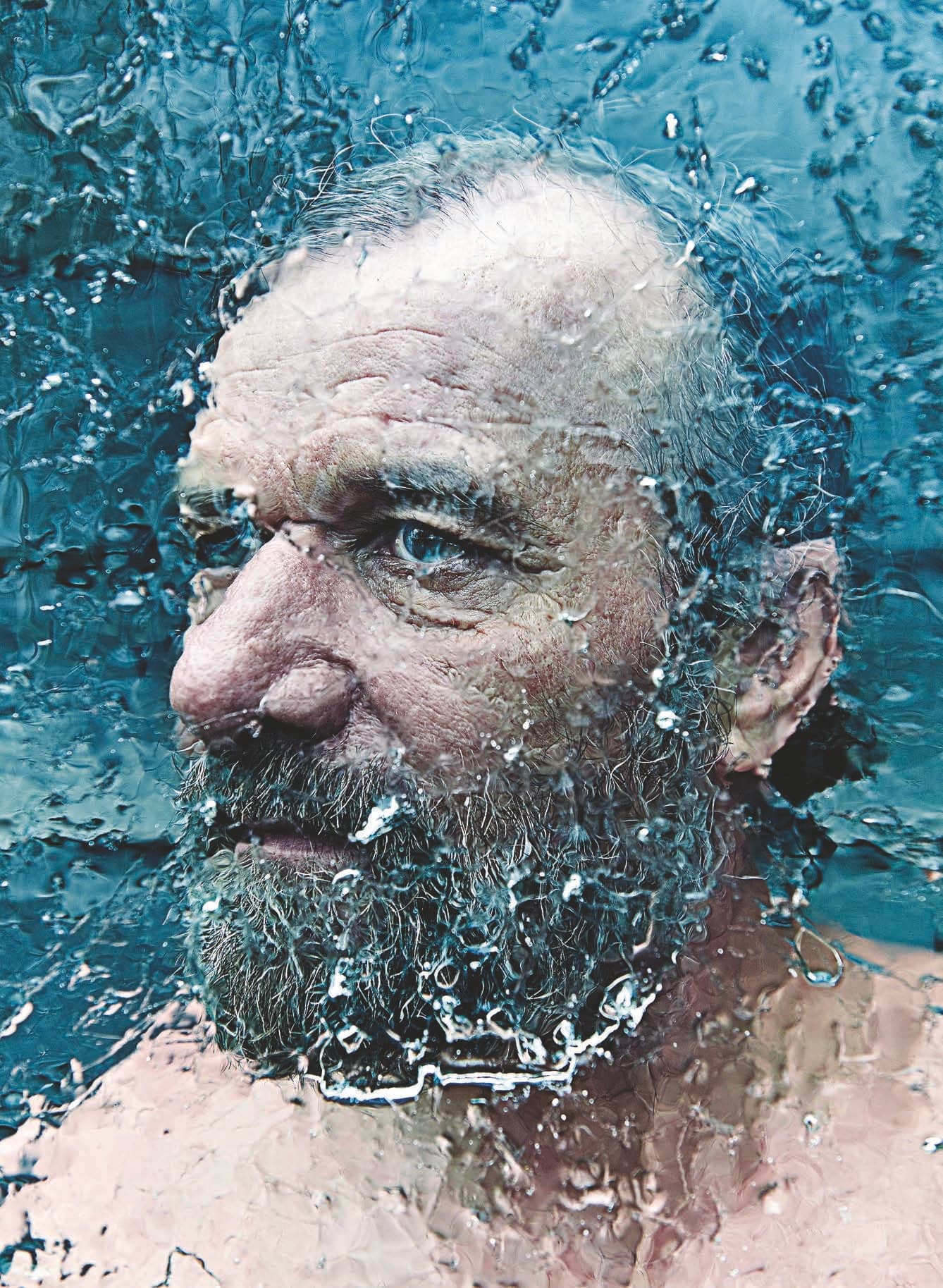 Wim Hof became famous for submerging himself in frigid water with the calm of a Zen master, and his teachings about breathwork and the health benefits of cold plunges have attracted millions of followers. Our writer traveled to Iceland to chill with the man who made cold extremely hot.

The air is cold but the water is colder, its surface gridlocked with icebergs. Slabs and hunks and blocks of ice the size of ships, houses, buses—they’re everywhere, crowded into the glacial lagoon. The icebergs are dazzling white and pale gray and a light milky blue, and striped with volcanic ash; the water is the color of dull metal. Low clouds press down. Seabirds shriek. On the far side of the lagoon, a glacier called Vatnajökull hunkers like the beast that it is: a 3,100-square-mile ice cap that sprawls over southeast Iceland, dwarfing other European glaciers. For anyone unaware that it is ill-advised to jump in for a dip, a big red sign spells out the hazards: NO SWIMMING— FREEZING WATER. YOU ONLY SURVIVE FEW MINUTES. And if that isn’t enough of a deterrent: DANGEROUS CURRENTS. ROLL- ING ICEBERGS FORM WAVES.

“Oooh, look at all those fears!” Wim Hof says, reading the sign in mock terror. He is 61 years old and scruffily bearded, with a growly, booming voice that’s easily heard at a distance. Hof is Dutch, his accent full of rolling r’s and long vowels. There’s nothing slick about his appearance. He’s wearing surf shorts, rubber sandals, and a tropical-print T-shirt under a thin raincoat that flaps in the wind. It’s not much in the way of clothing; by comparison, I’m swaddled in so many layers I can barely move my arms. It’s about 40 degrees Fahrenheit outside, with plenty of windchills. Farther down the beach, little clots of tourists who’ve braved the sour weather look like they’re huddled together for survival.

Hof, meanwhile, is in his element. His exploits in, on, and under-ice are so renowned that his nickname is the Iceman. Maybe you’ve seen photos of him standing encased in ice for nearly two hours or running up Mount Everest wearing only shorts. (He made it to 24,278 feet but had to turn back before reaching the summit due to a foot injury.) Or summiting Kilimanjaro in 31 hours—again, nearly naked—a climb that typically takes a week to allow for altitude acclimatization. Each of these activities seems like it could kill a person, but Hof’s only close call over the years happened on his first attempt, in 2000, to swim 50 meters below the solid cap ice on a lake in Finland. His corneas froze, impairing his vision, and he couldn’t find the exit hole. (He was rescued by a safety diver.)

Hof strips down to his trunks with gusto and starts heading toward the lagoon. He’s here to film promotional videos for his company, called Innerfire, and his crew—three athletic men named Peter Schagen, Thor Gudnason, and Tahir Burhan—are laden with camera gear. Hof turns to me. “I’m writing a new book, you know,” he says in a low voice, as though confiding a secret. “Its title is FUCK FEAR!” (Hof does, in fact, have a new book out, but its title is The Wim Hof Method: Activate Your Full Human Potential.) Then he lets out a guffaw and strides across the black lava beach.

At the water’s edge, Hof stops for a moment.“You gotta swim today,” he tells me. “Yeah—it will be good! We’ll go wild! We will sing in front of everybody! And we are gonna cut the crap and the bullshit and we are gonna live!” Hof tends to make intense eye contact, as though he can see right through a person’s arsenal of half-baked fears and excuses, and he’s doing it now, sizing me up. I’m saved by Burhan, who walks up with two guitar cases. He and Hof take out their guitars and start strumming. “Do you remember how to play… like a child… wooahh… that’s where I want to go, back in the flow,” Hof croons as the wind slaps at us.

Schagen signals that he’s ready with the drone and Hof puts down the guitar. The tourists have sidled closer, drawn perhaps by the music but more likely by the improbable sight of bare flesh. The lagoon is only a few degrees above freezing; plunging into water that temperature feels like simultaneously being shocked, jabbed with needles, and squeezed in a vice. It’s a sensation that most of us try to avoid. But if you can stand cold immersion—and survive it—beyond the pain there’s exhilaration.

“Most people just think, Who is that crazy man?” Hof says. “But we’ve got to get back to the cold. Somebody has to show this.” He flings out his arms as if embracing the world at large, takes a deep breath, exhales, and walks into the lagoon.

There’s no flinching, no gasping. He submerges slowly, then strokes toward an anvil-shaped iceberg about 200 yards offshore. A seal pops its head up and glares at Hof, then makes a beeline for him, moving fast enough to leave a wake. This doesn’t look like it’s going to be a friendly encounter.

Hof, treading water, spots his companion. “Hi, Johnny!” he yells as the seal approaches. The two stare at each other for a while, and then Hof, perhaps recognizing the futility of a territorial standoff with a seal, turns and paddles back to shore. He’s been in the water for 30 minutes; when he gets out, his skin is an alarming shade of red. “Easy does it,” he says, grinning. “We’ve got all day.” He wipes himself with a towel, showing no signs of shivering. “I feel great!”

IN A WORLD addicted to comfort, it isn’t easy to convince a vast audience that what they really need is to take teeth-chattering swims and ice baths—but Hof has managed to do this. These days he’s a widely admired counterculture hero. His message that most of our self-limiting beliefs are wrong, and that we’re capable of far more than we think, has resonated. He has more than a million Instagram followers, hosts sold-out seminars around the globe, and evangelizes nonstop, at top volume, about a new world of vigorous health and happiness in which we free ourselves from the clutches of a system that profits by keeping us sick or diminished. Earlier, at breakfast, he pounded his fist on the table: “It’s time for change! People are waiting! There’s work to do for the life force!”

This enthusiasm for—and firsthand demonstration of—expanded human potential is pure oxygen for the high-performance set. Recently, Hof trained a group of Navy SEALs how to endure cold water. His fans include Laird Hamilton, Joe Rogan, Tim Ferris, Dave Asprey, Russell Brand, and even Gwyneth Paltrow, who recently filmed a Netflix special with Hof. “I think we all have the capacity to do superhuman things,” explains Hamilton, a daily practitioner of Hof-inspired exercises. “Wim is one of those guys who’s able to show you what’s possible.” 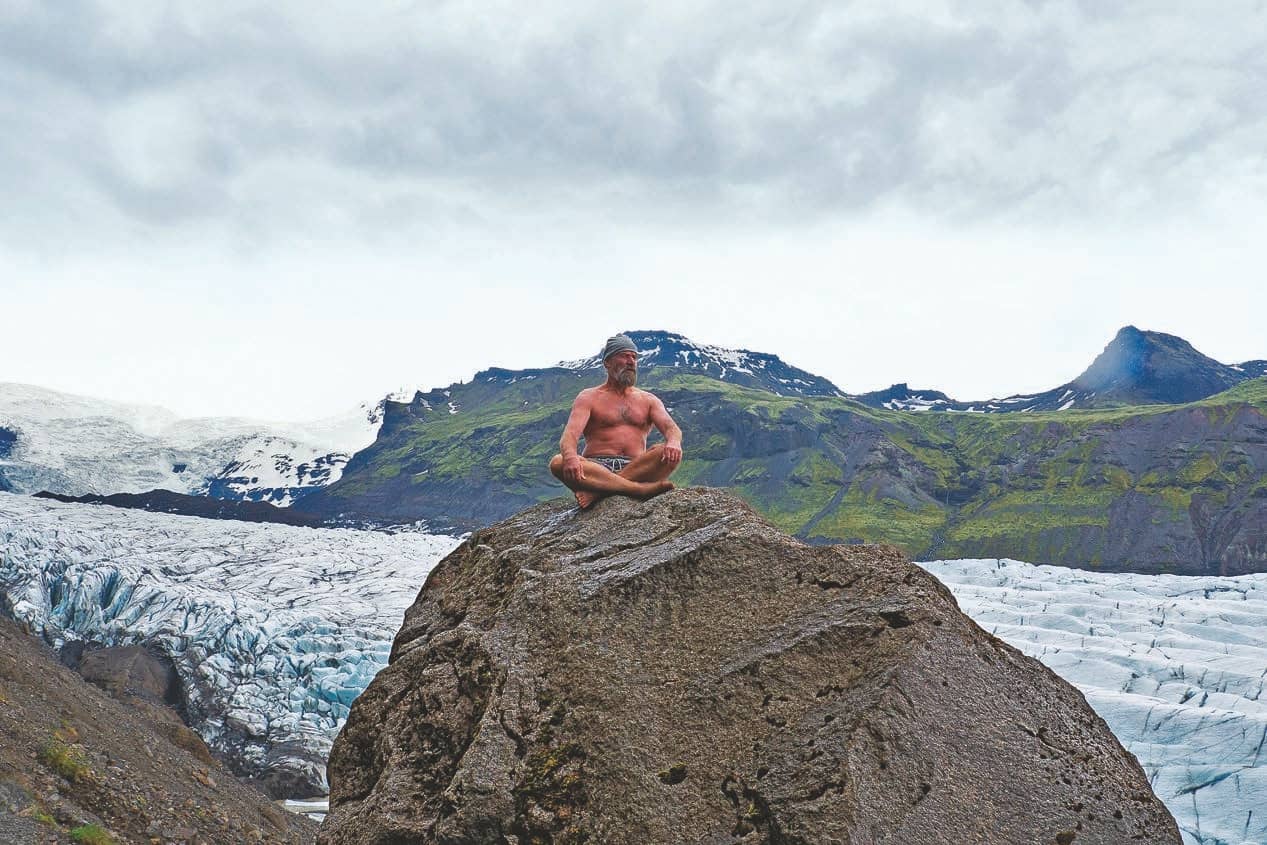 But it’s not just celebrities and pro athletes who are drawn to Hof. He has reached a much bigger audience. On any given day, Instagram is filled with photos of Hof followers up to their necks in ice baths, dashing into the ocean for polar plunges, standing under frosty waterfalls. A Vice Media documentary about Hof has been watched more than six million times on YouTube; another video, on the Yes Theory channel, titled “Becoming Superhuman with Ice Man—Wim Hof” has nearly 11 million views. Each year, Hof hosts a handful of one- or two-day workshops, on his home turf in Amsterdam and elsewhere around the globe, and a handful of weeklong expeditions into the mountains near Przesieka, Poland, where he owns a house that serves as a base camp, and in Morillo de Tou, Spain. Now when he charges up snowy mountains, he takes bands of followers with him. For anyone with a Speedo and a strong desire to test themselves, another Kilimanjaro expedition is slated for early 2021, pending developments in the COVID-19 pandemic. (The proceeds from the fee to attend will go to a local charity.) There are also about 600 certified Wim Hof instructors offering their own workshops, graduates of an eight-to-ten-month training program called the Wim Hof Academy, in addition to a free minicourse on Hof’s website and longer online courses, the prices of which have been reduced since COVID hit to allow more people to participate. All of which is to say that the Iceman is having a major moment.