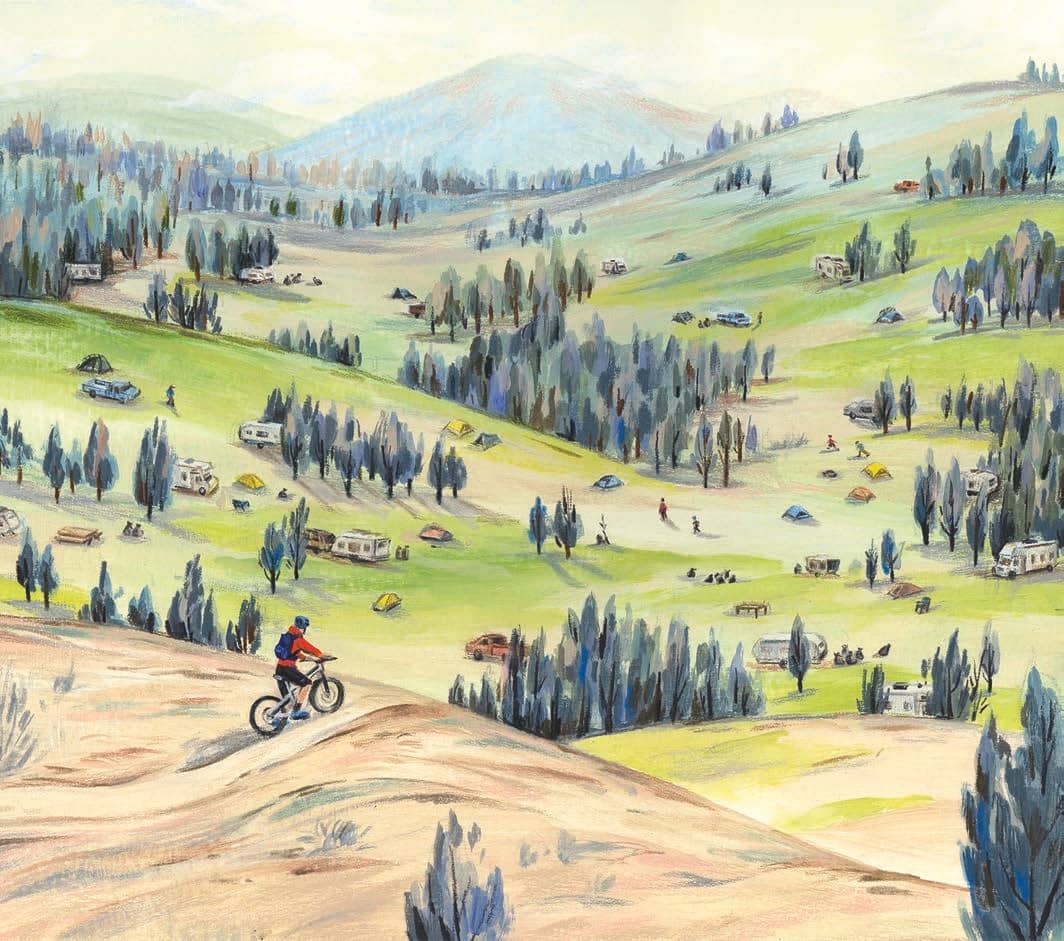 THE DIASPORA along China Hat Road unveils itself slowly as you drive southeast out of Bend, Oregon. At first the ponderosa pine and sage Forest Service scrubland seems to offer a healthy dose of rugged nature just beyond town. But as you roll in the direction of China Hat butte, you begin to feel that something’s wrong.

Turn down a dirt road and you might spot a tarp camp. Keep going and you could see a weathered RV parked next to an old pickup. The owner is a carpenter who commutes to jobsites in Bend. Nearby, a pop-up camper, tucked into the brush, looks like it will need to be towed out come spring; dusty propane tanks reveal the resident’s heat source. Farther from the road, children’s toys lie near a fire ring. Old tables and plastic sheeting are scattered over an acre of land. Shell casings litter the ground where a tree was shot down.

This composite portrait of China Hat, derived from the kinds of observations that rangers have made on Central Oregon’s Forest Service and BLM holdings, hints at the scope of the homelessness problem on America’s public land. There are numerous locales like China Hat, most of them in rough country on the outskirts of towns across the Mountain West. The people living more or less fulltime in these areas represent a dizzying array of demographics. Some work in nearby communities where they can’t afford housing. The Forest Service term for the entire category is nonrecreational campers—a euphemism that takes the sting out of the situation. And while people end up living spread out in the woods for the same reasons that others cluster together on city streets, the difficulties they face can be harder to gauge and more difficult to address.

Concerned about a looming crisis, the Forest Service published a report in January 2019 aimed at both highlighting the issue and helping employees understand the social and economic forces at work. “I think what’s happening with homelessness in the broader society is also happening in our national forests,” says lead researcher Lee Cerveny. The report included a survey that produced some unsettling findings. Though nonrecreational camping is concentrated in western states, more than 46 percent of rangers and law-enforcement officers surveyed nationally reported that the problem is increasing in their districts.

One of Cerveny’s goals was to get a handle on the types of people living on public land. The answer: a diverse cross-section of the U.S. Ranger surveys cited transient retirees, informal gatherings of homeless adults, seasonal workers, forest workers (think mushroom pickers), university students, families, teens, gang members, fugitives, runaways, and communal groups like the Rainbow Family. There are also addicts and the mentally ill, along with separatists with survival skills.