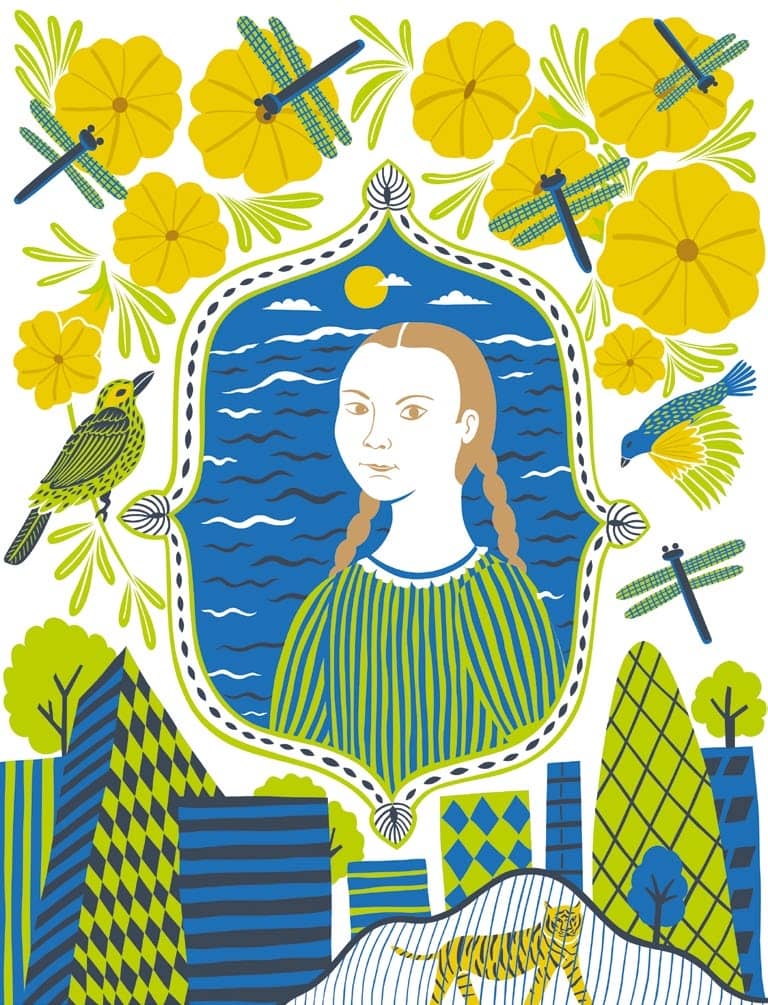 An anthropomorphized tiger’s perspective, a viscerally worded futuristic interpretation of loss, a critique of performative activism, a meta reflection on the earth’s crises. Told through different lenses, Janaki Lenin, Indrapramit Das, Keshava Guha and Roshan Ali’s stories — written exclusively for Verve — attempt to make sense of the fraught reality that we exist in today

IN THE MIND OF A TIGER

This story is loosely based on the real-life misadventures of a tiger that walked from Nagarhole to Bandipur in 2019.

I was afraid it would come to this. That I would become a captive. At least I didn’t get killed. That’s all that matters. I’m fed on time, and none of the humans seems to bear any ill will considering everything that’s happened. I’ve heard some crazy stories about me, so let me set the record straight since I have all the time in the world now.

First of all, my rival, that puffed-up two-faced gib, did not chase me away. I was merely bored with the tedium. Every day, walk the same path, spray scent on the same trees, sniff the odour of the same cranky neighbours. I wanted to see the world. Make no mistake, I left of my own free will, not because some second-rate warrior trounced me.

When I stepped out of the forest, I’ll admit I had been nervous at first. Who wouldn’t be if they had to walk across fallow fields without even a bush to hide behind? But humans, it seems, don’t feel naked and exposed by open to-the-sky spaces.

The excitement of my adventure wore off when I grew hungry. What to eat? No langurs, sambar, or gaur. Not even spotted deer. I was in a fix.

I killed a scrawny bullock that didn’t struggle or fight. But it didn’t taste as juicy as my usual venison chops. Travellers on a budget can’t be choosers. After filling my belly, I lay on my back with my legs in the air in a nearby sugarcane field. I had just drifted into a deep, dreamless slumber when I scrambled awake on hearing a loud racket. It was already daytime. Peering through the stalks, I spied a large crowd of people shouting and gesticulating beside my half-eaten dinner. I took a long breath to calm my ragged breathing and slow my hammering heart. Forget eating seconds, if I didn’t leave immediately, my life would be in danger.

No matter how far I went, I could not escape the stink of humans and their animals. Should I turn around and go home? But who knew what new politics were brewing there? Maybe that ornery sombitch had moved into my home. He must think I’m a coward to have absconded. I didn’t care what he thought. Besides, there was always the possibility that I might find a fantastic forest, far better than the one I had left behind.

It was around this time a man died. I’m not going to admit to anything. The heat that the accident raised became too much, and I continued walking. Exhausted, I rested in the cramped quarters of a lantana thicket, dreaming of the tender meat of gaur veal melting like steaming fat in my mouth. The dream energised me to keep going. 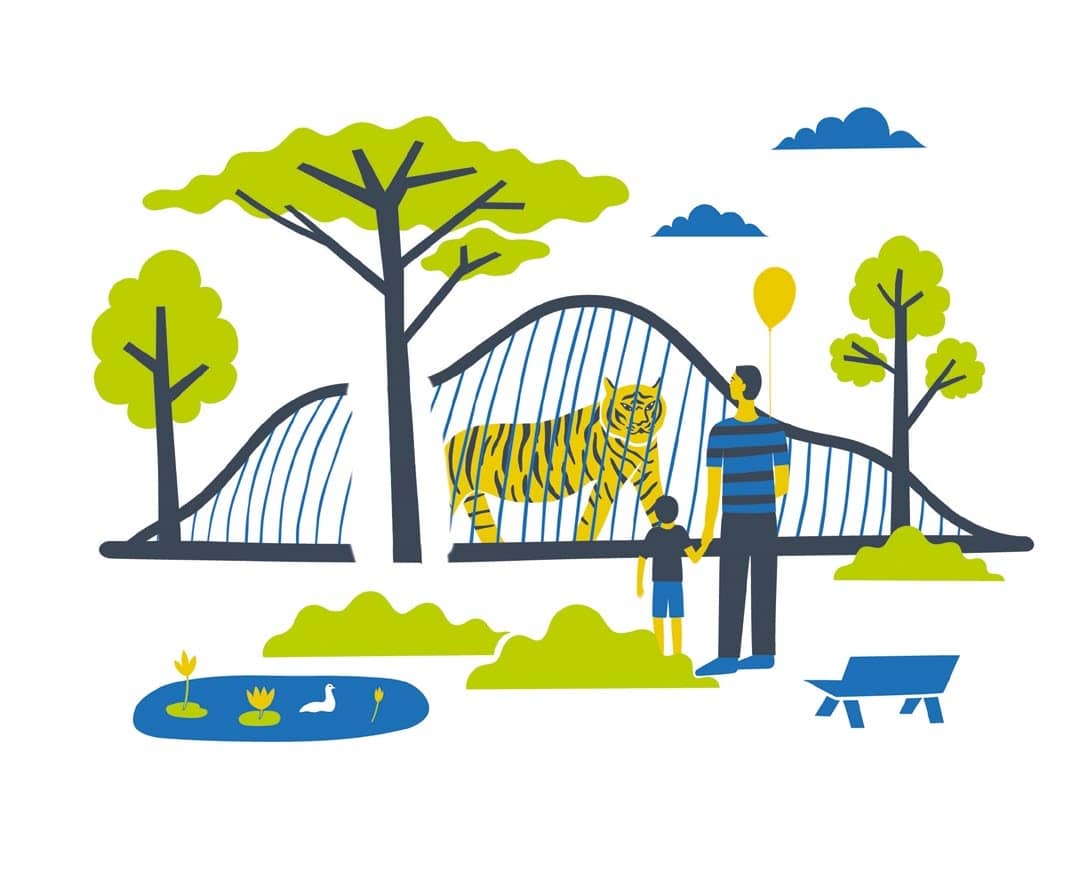 At long last, I entered a large forest. I savoured the sight of the thick canopy and the delicious smells of meat on the hoof. My fur twitched with pleasure as the cool breeze grazed my body. With nose to the ground and whiskers trembling, I drooled with anticipation as I followed the scent trail of a sambar. A bright flash of light stunned me. Had I been shot? I took a step forward, and nothing hurt. Abandoning the hunt, I took cover, a shivering nervous wreck. I realise now that humans spied on me by tying some contraptions to trees, which captured my likeness.

A few days later, elephants swarmed all over the forest. They were not the ordinary kind. These did the bidding of people who sat astride them. There was also a blasted sniffer dog that got wind of my scent. I would have snapped its neck in a trice were it not for the humans. It wasn’t trained to track tigers, so I was safe. But then another group of humans arrived, and nothing missed their keen eyes. These barefoot trackers were right on my tail, even following my barely visible pug marks. It was a game of cat and mouse except I was the rodent.

In my desperation, I made a wrong move and found myself surrounded by elephants. Before I could spot an escape route between their tree trunk-like legs, I heard a loud report close by. I feared I was a goner when I felt my thigh burn. A small plastic cylinder pierced my flesh. I crawled under thick bushes and lay low, barely breathing as I watched them hunting for me. I tried to sneak away, but my legs wouldn’t work. I pulled and strained, but I just couldn’t move. My legs had become paralysed. I struggled to keep watch, but soon everything turned black.

When I came to, I found myself in this zoo. I’ll take it easy for a while. The thought of my rival enjoying life back home does rankle me. But once I’ve recuperated, I’ll find a way of getting the hell out of here. 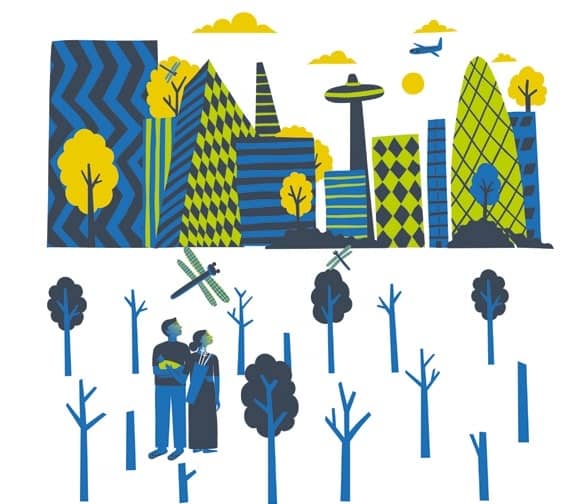 The Smart City seemed close enough to touch, its skyscrapers shards of cool glass stuck in the earth, reflecting the sun. Matar wrapped his headscarf over his nose and mouth to shield from the hot, dusty wind. Shimmering in the heat, the city was a perfect nest woven in glass and metal, infested with silver insects. Security, commercial and service drones hovered around the city — wasps bowing and weaving on eddies rising from the drought-parched horizon. Each one servicing and surveilling the wealthy residents of those towers, who were hermetically sealed in their air-conditioned suites where a variety of bots cleaned, cooked, and repaired for them. Within, people were sheltered from infectious diseases and starvation, drought and superstorms.

Matar’s wife Meira stood against the veil of dust, peering through it at the sky, sweat-damp sari rippling. She handed Matar their baby Sonali with a soft grunt and took the bow off her shoulder. Sonali cooed into Matar’s chest as he held her.