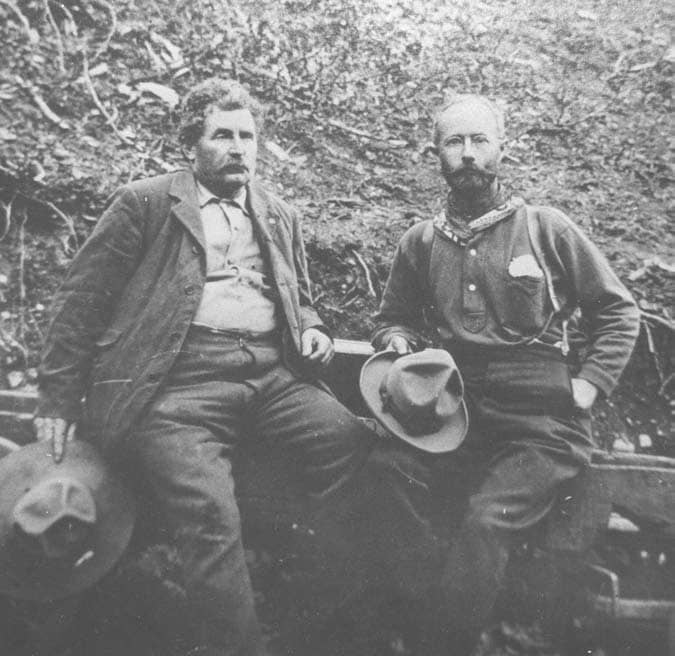 Laura Thompson lived with her husband, Fred, and their son, Roy, in a 12-foot by 16-foot one-room cabin on Wolf Creek in the upper Methow Valley.

In one of her written recollections of her early pioneer days, she described the arrival of the Waring family in the Methow Valley on September 26, 1891.

“We passed a distinguished looking family camped by the river — a gentleman, a lady, a 15-year-old boy with a smile on his face and a very pretty little girl about 13 years old. A few days later friends visited and exclaimed, ‘Good news! Good news! We are going to have a store.’

“Mr. Waring and family planned to build a store at the forks of the Methow (and the Chewuch rivers), the true beginning of the town of Winthrop. At that time there was nothing in Winthrop. All of us settlers spent every cent we could with Mr. Waring.”

Guy Waring was determined to settle in the West. The Boston resident and Harvard graduate had already tried once in Okanogan County in early 1885.

The 25-year old Waring had married Helen Greene, his stepmother’s sister, a widow 10 years his senior with three young children. Waring’s father was not pleased with the marriage or with his son’s lack of interest in the family engineering business. To Guy it seemed like the right time to be on the other side of the country.

Leaving his new family behind, Waring rode the train to Oregon. Soon after reaching Portland he heard tales of the 15-mile strip across the top of Okanogan County opening for settlement.

Waring took the train back to Spokane Falls. There he found Cullen Bash, collector of customs at Lake Osoyoos, who readily agreed to guide him to the Sinlahekin Valley in the 15- mile strip.

Bash took Waring to see Henry Wellington’s well-developed ranch just above the confluence of the Sinlahekin and Similkameen Rivers.

Waring liked what he saw, a working cattle ranch with a house ready for his family. He bought Wellington’s buildings and squatter’s rights.

In the spring of 1885 Waring loaded up his family and belongings for a train ride back to Portland and from there to Sprague, Washington, near Spokane.