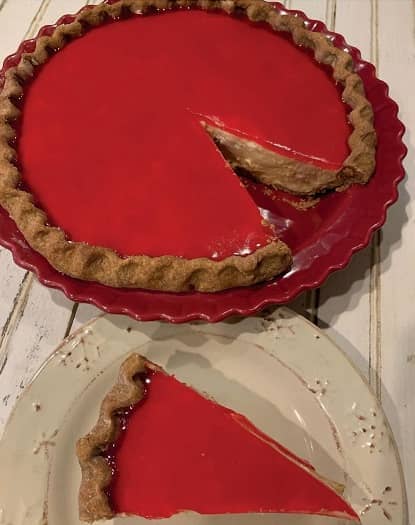 WITH MESQUITE CRUST AND A PRICKLY PEAR JELLY GLAZE

Peanuts probably originated in Brazil or Peru, where pottery sherds bearing peanut decorations date back 3,500 years. When returning explorers brought peanuts back to Spain, they spread into Asia and Africa and came to the American South with African slaves in the 1700s. Imaginative cooks incorporated this nutrient-dense ingredient into rich Mexican moles, spicy Thai peanut sauces, African peanut stews, Virginia peanut soups, and Georgia peanut butter pies, along with myriad other creative treatments.

Peanut harvest occurs in August and September, and while Georgia is consistently the leading peanut-producing state, nearly one-fifth of the annual U.S. peanut harvest hails from the Southwest, a region defined by the National Peanut Board as Arkansas, New Mexico, Oklahoma, and Texas.

In fact, Texas is quite often the No. 2 peanut-producing state, so why not go Georgians “one better” on their signature peanut butter pie with this delectable Southwestern beauty?

FOR THE PIE CRUST: