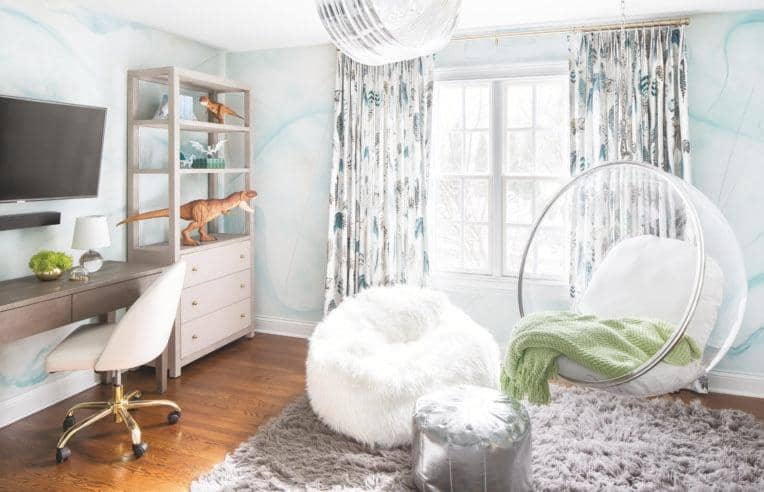 FAMILY-FRIENDLY Carmel Henges’ daughter, Caili Henges, loves dinosaurs and science, writing and filmmaking. Before committing her story characters to type in a school assignment, she’ll often draw them first. “She visualizes everything,” says her mom.

But Caili hasn’t attended a traditional school since age 9, when doctors diagnosed her with autoimmune encephalitis, a condition in which her immune system attacks healthy brain cells. The treatment for the disorder leaves her susceptible to infection, so the now-14-year-old Caili spends most of her time in her bedroom, its anteroom, and the Jack-and-Jill bathroom connecting the two—and lately she’d grown tired of its dated preteen look.

But how do you find a designer who gets the “quirky dichotomy of a girly girl who really digs dinosaurs”—and also hasn’t had strep throat as an adult? asks Carmel. (A strep infection could exacerbate Caili’s condition.)

The designer who’d been working on an outdoor addition to the Henges’ home had had strep as an adult and therefore couldn’t take the job but recommended interior designer Jessie Miller. Carmel looked up the designer’s work, loved it, and decided to give Miller, who’s not a carrier of strep, a call.