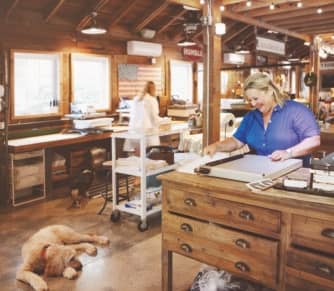 Two women—one a baby boomer, the other a millennial—share more than just a love of design.

BEFORE KNOLLWOOD LANE became the outlet for Susan Medart’s late-night inspirations seven years ago, she was a home décor hobbyist. “I was one of those people who would wake up in the middle of the night with an idea and not go back to sleep until I did something with it,” she recalls.

Three years ago, Medart’s daughter-inlaw, Allyson Medart, who also has a background in art and is similarly inspired by all things home-related, joined her mother-in-law in business. Their arrangement isn’t unique, but it’s not every day that a mother and daughter-in-law share so much in common that they build their professional lives around those interests. “I was moving from Texas, getting married, and starting a new job with my mother-in-law,” says Allyson. “There’s always a nervous feeling when you start [something new], but I knew we were going to get along well.”

MORE STORIES FROM DESIGNSTLView All