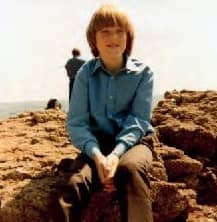 In 1977, flares, brightly coloured shirts, kipper ties and safari suits were everywhere. The charts were dominated by Elvis, Abba, David Soul, Boney M, The Bee Gees and Showaddywaddy. Punk Rock, Disco, Rock ‘n Roll, Soul, Country and Western and Pop all featured alongside middle of the road artists such as Val Doonican, Brotherhood of Man and Leo Sayer. Movies of the year included Star Wars, Close Encounters of the Third Kind, Saturday Night Fever and Smokey and the Bandit. These were the days before the Internet and mobile phones – people conversed on CB radios, cool kids mastered skateboarding while the more nerdy of us (Fig.1) were taken by another craze – metal detecting.

My first detector was a home-made effort. There were many electronics magazines around in 1977 which instructed people how they could make anything themselves, from digital watches and CCTV cameras, to short-wave radios and even burglar alarms. In one magazine I bought was a feature about how you could build your own metal detector. I was 16, my father had a soldering iron – how difficult could it be? To be honest, even the one featured in the magazine and built by a professional looked pretty ropey. Undeterred, I made a list of all the parts, transistors, speakers etc that I needed and made my way to our local electronics shop which was called Radio Parts. The coil was made out of a perfect circle of hardboard, copper wire and tin foil. The arm was made out of black conduit of the sort used by electricians, which was bent into shape by pouring on boiling water. I carefully followed the instructions, soldered everything to the circuit board and fixed it in a specially made box which attached to the stem. Did it work? In short, no. It made a noise when I turned it on but that was about all it did. At the time, electronic magazines were notorious for making mistakes, and any errors they made were published approximately two months later.

I couldn’t be bothered to start again and thought that it probably wouldn’t work anyway, so I saved up and bought a basic C.Scope model from my local Dixons. Actually, I think it might not have been a C.Scope but a cheaper, identical, Dixons’ copy. It cost £19.99 and had two buttons: an on/off and tuning button and a fine-tuning button. An average weekly wage at the time was about £68 (often less), so it cost just less than a third of a weekly wage.

In the 1970s, all owners of a metal detector had to have a licence. Archaeologists were also somewhat unhappy with the new hobby with holes appearing all over the countryside, many near to ancient monuments. However, by 1980, the licence was scrapped. I was excited to try my new metal detector out.

It worked well on coins I dropped on the ground to test, but a quick search of the garden found nothing. My father had previously found a William and Mary halfpenny (Figs.2a & b) in the garden of our Plymouth home when we moved in back in 1968, so my hopes were high. He’d also dug up a military cap badge at the same time, which I later discovered belonged to the Manchester Regiment (Fig.3). 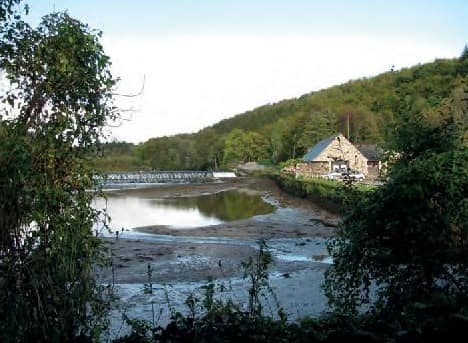 Near to our house was a Palmerston Fort and an older resident at the time mentioned that he could remember troops being stationed there. This was probably during the Second World War. I detected all over the back garden, sure that I would find something. However, I only received one signal. I dug down, the item was obviously quite big, but when I recovered it, I discovered that it wasn’t something ancient but was, in fact, a large metal bucket, completely flat, left behind by the builders of our house. Disheartened, I decided to detect further afield.

Find We travelled to Dartmoor (Fig.4) in my father’s Hillman Avenger and I made my first ever find where we sat having a picnic by the riverside at Lopwell Dam (Fig.5) at the same time. I received a good signal, dug a hole and was delighted to find three pre-decimal halfpennies (Figs.6a & b). The find greatly increased my interest to search for further treasure. 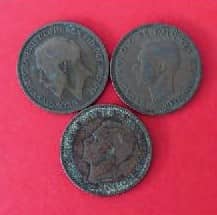 I remembered that when I was younger, the fair had pulled up at the end of the street with its slot machines, dodgems and other rides (the Waltzer made me sick). Surely, there must have been many coins dropped, I thought, so I headed off to find them. I’d bought a pair of headphones, similar to the ones cool radio DJs of the time, such as Noel Edmonds and Simon Bates, wore on Radio One. I turned the machine on and began detecting, my first find being a pre-decimal twelve-sided brass threepence (one of my favourite coins) followed by old pennies and halfpennies(Fig.7). For a while, I was in a world of my own, until I realised I had company. “Can I have a go, mister?” Said a small boy. Then his pals showed up. I’d become a local attraction, naively imagining that I would go unobserved. I let them have a go and then, embarrassed, returned home and decided to detect somewhere quieter, out of the way where I could happily go unnoticed. 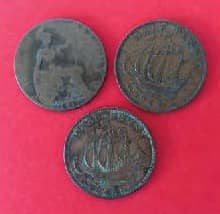