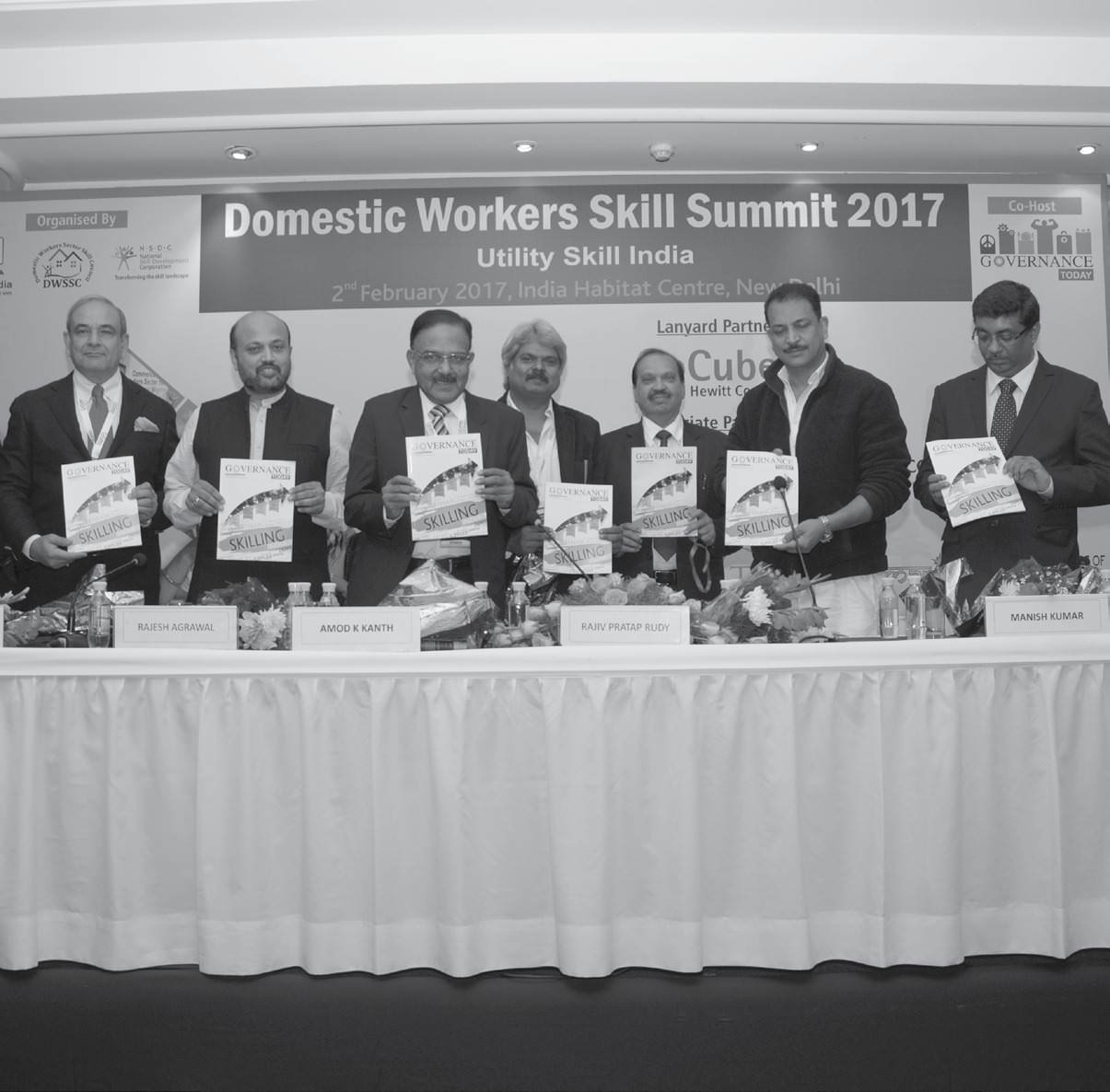 Domestic work is one of the largest sectors of work among the essential services and is a lynchpin connecting the economics of the home and the requirements of the workplace. Domestic workers who are estimated to be over 20 million in the country – women constituting 90 percent of them, are a constantly growing service in the informal and unorganized sector. The last two decades have seen a sharp increase in their numbers on account of the demand and utilities they carry. This increase in the number of domestic workers is also linked to a shift from agrarian-based economy to a manufacture and service-based economy.

However, the majority of domestic workers in India still remain illiterate, low-skilled and ill-provided in their lives and workplaces. They are also one of the poorest and most exploited groups of workers in the country, migrating in sizeable numbers and often trafficked.Imparting skills goes a long way in formalizing and upgrading the labor economy. It leads to a change in the workers’ demographic profile and helps them settle into long-term occupations, thus reducing frictional unemployment. Also, it is not just training and recruitment that is catching the interest of entrepreneurs and service providers but also their placements into creation of need based job roles. Employers are increasingly seeking workers who possess a mix of transversal, vocational as well as technical Skills.

There is largely the expectation for the skills’ programs to strike the right balance between leveraging and recognizing existing skills, and skilling, and also to account for the increasingly varied nature of the domestic work sector, both in terms of the skill sets represented, training and experience, and the qualities and better services that employers are seeking.

By committing to improving domestic workers’ skills, organizing and mainstreaming the workforce in the domestic labour segment commit to building an extended economy apart from creating appropriate service and life conditions for these hugely neglected and unorganized workers in the country.

In this background, Domestic Workers Sector Skill Council (DWSSC) in association with Governance Today organized a One Day ‘Domestic Workers’ Skill Summit 2017’- Utility Skill India on 2 February 2017, at New Delhi. The Summit was intended to provide a more solid foundation for an overdue national conversation in order to recognize that Domestic work is among the most essential services and economic activity.

Already the national policy on domestic workers alongside state level legislations have brought this sector under the legal, constitutional, educational and developmental purview. The Domestic Workers’ Skill Summit brought the planners and policy makers, trainers, service providers and the implementers together on one forum for a clear understanding of the sector, particularly with reference to the utilities in the household services and for creating a positive nexus among those who care for our homes and our loved ones being treated fairly with policies, and to facilitate the link between skill and education for living and for making a living.

The Summit also resulted in a set of concrete recommendations for future policy reforms and programs.

Kanth, the former bureaucrat who has been raising his voice about similar issues surrounding the weaker sections of society, has contributed to various policy discussions of the Indian Government in the past. He presented the ground situation in domestic work sector that sees the entry of nearly 13 million workforces in India’s labour market every year, out of which, only 5 percent are trained workforces in the segment in comparison to the international situations, where in most of the developed and developing countries have their skilled workforce as high as between 40 to 90 percent. Talking about the role of the Sector Skill Council, he said, this is not an industry led Sector or a Council. For this sector, every household is like an industry. Employment is not the problem in this sector; rather the problem is about skilling the Domestic Workers, their safety, their social and economic issues.

The fund allotment for Skilling has been doubled in the budget 2017-18 in comparison to the previous year. ‘Most of the domestic workers now need to be trained to make this sector professional and to make the profession aspirational’, he said.

Maj Gen Manik Sabharwal (Retd.), CEO, DWSSC presented the objective of providing the summit platform to bring together the Training Partners, Assessment Partners, government functionaries, industry, etc to synergize all efforts so as to meet the bigger goal for meeting the skill requirements of Domestic Workers in the country. He defined the role and characterization of a domestic worker, and discussed the challenges in this sector, how there is an exponential growth of the domestic workforce from approximately 6 million in 2013 to a projected 10.88 million in coming few years. Statistics says, 2.5 million out of the 7.9 million of the total number of the Domestic Workers are found in the tier 1 cities.

Maj Gen Manik Sabharwal also discussed the objectives of the Sector Skill Council and how they are working towards changing each of the challenges in the sector to opportunities. National policy for domestic workers is waiting for the approval with the Union Cabinet. That apart, the Council also signed MoUs with states including Jharkhand, Uttar Pradesh, Madhya Pradesh, and also stand closely to sign the understandings with Punjab and Goa. The Council provided support to Jharkhand government in drafting the Jharkhand Private Placement Agencies and Domestic Workers Regulation Bill, which is likely to be replicated to other states. The Council has also made 4 Participants’ Handbooks, completed 8 ToTs. It has set a target of 1680 trainings for job roles like general house keepers, house keeper cum cooks, child care taker, elderly care taker-non-clinical, which, it is all set to commence soon. The Council is considering two more job roles for Japa maid and Baby care.

‘The first Indian International skill centre is commissioned in Ranchi, which will take off soon. DWSSC also looks forward to have more such international training centres with the support of NSDC’, he said.