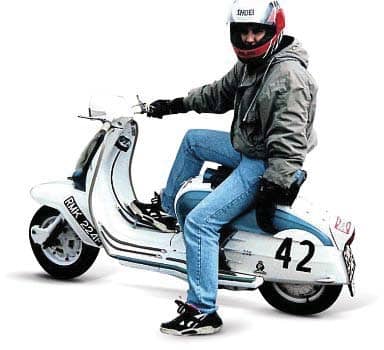 The scooter tuning market is big business. It seems the bragging rights have changed though, from speed… to simply how much power you have got!

I have no doubt anyone who owned a Lambretta back in the 1980s will remember the build-up to the launch of the TS1. Various snippets of news were carefully fed to the scootering media before the launch of such a ground-breaking kit, ready to revolutionise Lambretta ownership, according to some reports. There was one phrase quoted just before its official release and one that is still talked about today. I’m sure many can remember it: ‘The rider laying prone to the machine rocketed up to 92mph.’ Whether or not it was a true statement didn’t matter and at the time wasn't even questioned. The thought of possibly being able to achieve such speed was all that mattered to most potential owners.

If anything that statement seemed to create a new fashion. All of a sudden the only thing that mattered was how fast your scooter could go. If anyone dare have a tuned engine in their Lambretta, even if it was mild, there was only one question on people’s minds: ‘How fast does it go?’ It didn’t take long before speeds became greatly exaggerated. If someone said 75mph then the next said 80mph and so on, with claims of top speed continually rising. It didn't take long before 90mph+ was the standard industry figure. After all, if AF Rayspeed were claiming it with their new kit, why couldn't anyone else with an engine built by a local tuner?