Racecar Engineering|Anatomy of a Racecar 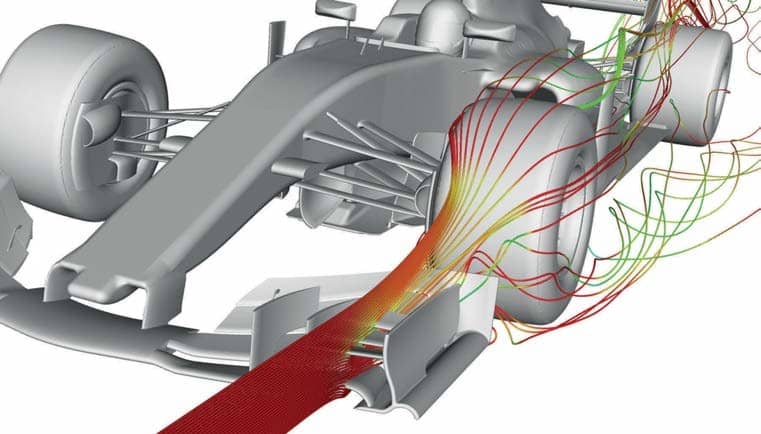 Racecar Engineering’s aerodynamics guru examines the role, function and effects of single-seater front wings and explains why they are about so much more than just generating downforce

When wings first appeared on open-wheel racing cars in the late 1960s the aerodynamic package generally comprised of simple, single element rear wings and front wings. In some instances, especially where the rear wings were modestly sized and mounted above or even forwards of the rear axle, the front wings were tiny, sometimes just small dive plane-like devices. But as the understanding of wings and their preferred locations improved so too did the size and importance of front wings.

They were not initially ubiquitous, though, and the full-width nose, perhaps best exemplified by the Tyrrell 006 that took Jackie Stewart to his third and last world championship in 1973, obviously worked well enough to the prevailing regulations. But front wings soon became pretty much universal. 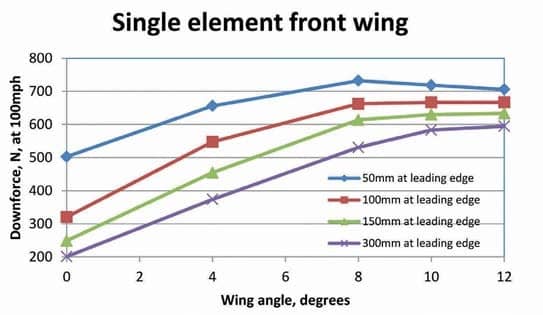 Half a century’s evolution now sees some very complex, beautifully crafted and, from the sidelines, hard to fully understand devices in regular use in Formula 1. Meanwhile, front wings outside F1, even where restricted by technical regulations, have become better understood and well developed in many categories. 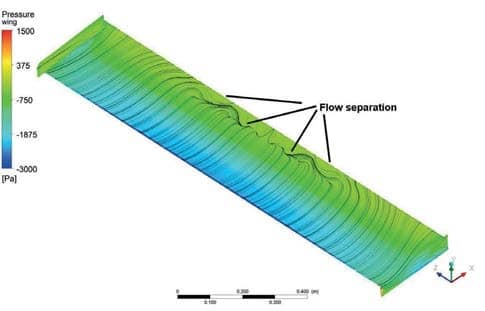 There are some universal aspects to single-seater front wings, the most crucial being that, as well as (typically) developing a significant proportion of a racecar’s total downforce, they also enable that downforce to be suitably distributed between the front and rear axles so that the handling balance changes as little as possible through the speed range.

Why does this matter? Because aerodynamic forces vary with the square of speed, starting small at low speed and growing rapidly with increasing speed. Hence, although putting a hand out of a road car window at 25mph indicates that the forces are already very tangible, in relation to a car’s size and weight they are relatively small. But at 50mph they have already quadrupled and at 100mph they are sixteen times greater than at 25mph and highly significant relative to a car’s weight and power. Hence, on any racecar fitted with downforce inducing devices, the vertical forces acting through the tyres, which are fundamentally what generate grip, can vary enormously through the speed range. And so that the racecar’s overall handling balance alters as little as possible through the speed range, the front to rear downforce ratio needs to be similar to the car’s front to rear weight ratio, or else the balance of grip will vary with speed. 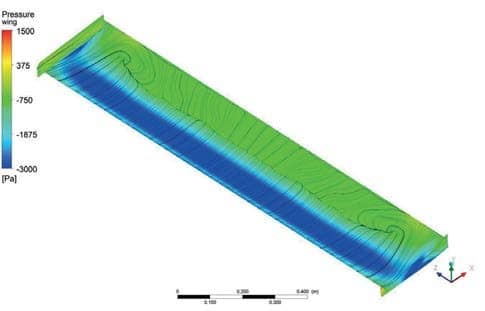 Imbalances in tractive and braking grip would also manifest themselves. So downforce balance is crucial, and hence – on single-seater racecars – front wings are also crucial, too. 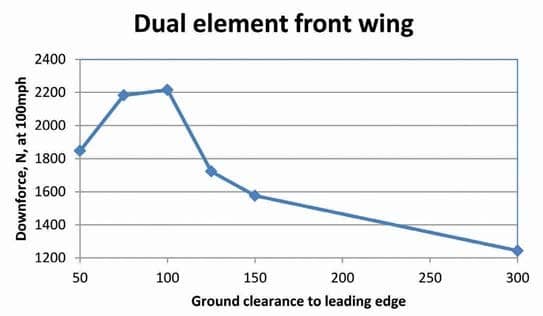 What magnitude of forces can a front wing generate? From the F1 CFD studies that appeared in Racecar Engineering magazine in 2015 (July, V25N7 and October, V25N10) courtesy of Miqdad Ali at Dynamic Flow Solutions, we saw that the CL.A values, that is, the negative lift coefficient multiplied by the reference frontal area, of the cars to the regulations then in place, were of the order of -4.0 to -4.5. Putting these numbers into the standard aerodynamic lift force equation: 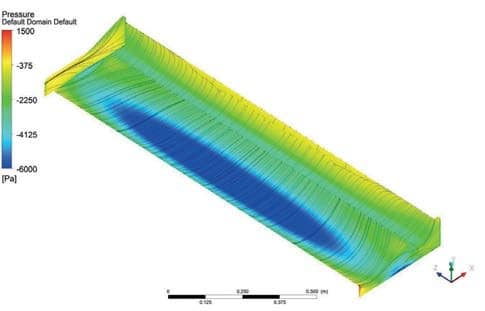 F = ½ x ρ x CL.A x v2 , where ρ (rho) is air density at standard temperature and pressure and v² is speed in m/s squared, we can calculate approximate total downforce for those two CL.A values at any given speed, say, 100mph (44.65m/s), vis

From those same CFD studies we also saw that the front wing generated approximately 30 per cent of the car’s total downforce. So at that time the front wings were generating around 149kg (329lb) to 168kg (370lb) at 100mph, these figures rising with the square of speed to between 598kg (1315lb) and 672kg (1478lb) generated by the front wing alone at 200mph.

However you look at it then, whether in terms of actual vertical forces or on the simpler basis that the front wing creates almost a third of such a car’s total downforce, the front wing has a major role to play on a Formula 1 car, as it does on most open wheelers. Other categories do not permit such extreme devices as the front wings seen in F1, but front wings still play that crucial dual role of creating an important part of the total downforce while enabling an aerodynamic balance. Furthermore, while total downforce and hence front wing downforce might be less in other categories, the significance of that downforce must be considered in relation to the car’s weight; a lesser amount of downforce on a lighter car can be just as significant proportionally, and hence in relative grip-enhancing terms. 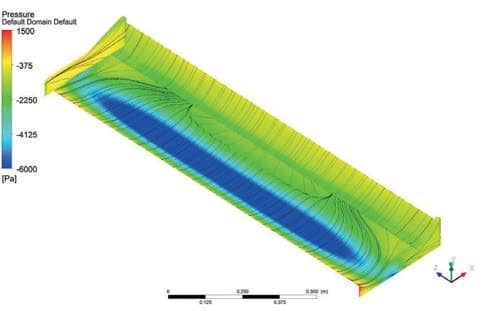 A front wing functions in a special environment, being positioned close to the ground. This is not simply because the regulations effectively mandate this location in many single-seater formulae, it is primarily through preference, because an inverted wing in ‘ground effect’ generates more downforce than the same wing in freestream, or indeed one that is simply higher above the ground.